With the news that the Supreme Court has recognized the right of lesbian, gay, bisexual and transgender people to enter into same-sex marriages, the Observer surveyed some of the top websites looking for interesting ways that they marked the news, with special design elements, animations or other ways of permitting their users to show support together.

Here’s what we found:

Twitter promptly changed the logo of its official account, @Twitter, but then we noticed that it did perhaps the most interesting design element. Anytime someone tweeted #LoveWins, a rainbow heart character followed. Tweet #Pride? You get a rainbow flag character. More on that here.

Facebook made it fast and easy to show your support for the news. Go to this link and you can make a filtered photo like the one above.

Also, Facebook Stories released a short film about Justin Kamimoto, a young leader of the LGBTQ community in California’s Central Valley, according to a spokesperson for the company.


Google’s homepage modification is pretty modest, as you can see above. We’ve reached out to the company to find out if a Google Doodle might be forthcoming (like this one for Alan Turing). That said, the front page links to a video on YouTube that starts with coming out stories and ends with same-sex marriages.

In Google New York, the logo on the building has been updated. This could have been for Pride weekend, but the timing works either way.

BuzzFeed modified its main logo with a rainbow motif and, naturally, linked over to loads of Pride-related content. It also added a new button at the top of the screen to get readers to their LGBT news and posts as rapidly as possible. Finally it updated its Twitter logo, with a rainbow modification.

The more interesting part of what BoingBoing did was its infographic. In a way, it’s pretty simple: where’s gay marriage legal in the US? Everywhere, now, so the site spread a rainbow flag across the whole country in a post following the decision.

Another rainbow modification to the top line of the site. Not on its logo, though: TechCrunch underscored the whole header of its page with a logo.

It looks like Vimeo had its logo modification ready for Pride, but then it turned out to time well with the marriage equality news, as well, judging by this blog post. The site both modified its logo across all but its front page and it made a collection of relevant films, hosted on the site.

The social network for professional contacts didn’t modify the main symbol across the site, but it did change its own icon on LinkedIn’s own page on LinkedIn.

The aliens on the main page are #ProudtoLove.

The blogging platform made its Tumblr ‘T’ animated, with rainbow colors, on the dashboard. Keeping with the GIF spirit, the staff blog also has a celebratory animation.

Also, check out these TED talks on the LGBT experience. 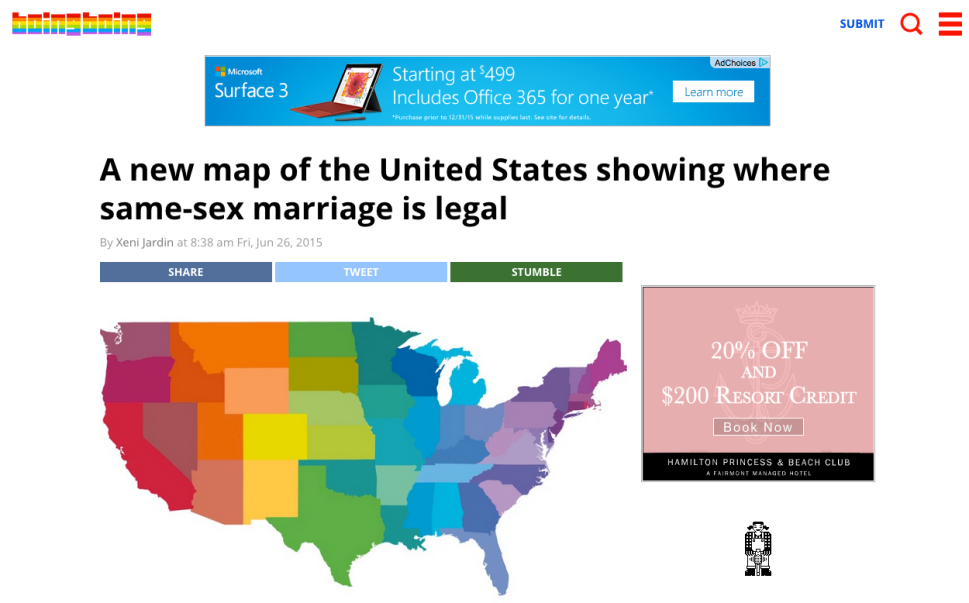