The New Jersey Supreme Court this morning reversed a lower court ruling that Gov. Chris Christie and state lawmakers must contribute more toward the pension funds for public workers. (Pizarro/PolitickerNJ)

Unscathed: Green gets 21 towns behind him to win another two years as chair

MOUNTAINSIDE – The sense was the body count could mount so long as the essential component parts remained intact. There was no mention at this Union County Democratic Committee reorganization meeting, for example, of Assemblywoman Linda Stender (D-22), felled in a shore house scandal; or of former Union County Chair Charlotte DeFilippo, vaporized in a local political firefight in her hometown of Hillside; or of former Plainfield Democratic Chair Jerry – actually, scratch that – the committee, in fact, tonight unanimously reelected Green chairman despite a drubbing he took last Tuesday night in his home town of Plainfield.  (Pizarro/PolitickerNJ)

Unscathed: Green gets 21 towns behind him to win another two years as chair | New Jersey News, Politics, Opinion, and Analysis

EDISON — Unwitting observers who were lucky enough to be standing in the Pines Manor ballroom off Route 27 both last night and tonight probably got two vastly different impressions of the present state of party politics in Middlesex County.  (Brush/PolitickerNJ)

HOBOKEN – Hudson County Freeholder Anthony L. “Stick” Romano became the Hoboken Democratic Committee chairman in what was reported to be a raucous hand-raising vote on Monday night, ousting incumbent Jamie Cryan in an atmosphere familiar for the Hudson County city and its fractious politics.  (Bonamo/PolitickerNJ)

Beaten last month in a brutal mayor’s race, West New York Commissioner Count Wiley said he’s not even climbed out of the ring yet or heard a bell tolling the final round.

All he knows is that Mayor Felix Roque’s loss is his – and, by his own estimation, West New York’s – gain.  (Pizarro/PolitickerNJ)

According to prosecutors, Roque, a medical doctor, is accused of referring patients to the medical imaging company Diagnostic Imaging Affiliates in exchange for cash bribes and election campaign contributions.  (Pizarro/PolitickerNJ)

Donnelly: Christie didn’t live up to his end of the deal

One of the plaintiffs in the case, Donnelly bitterly absorbed the news.  (Pizarro/PolitickerNJ)

Donnelly: Christie didn’t live up to his end of the deal | New Jersey News, Politics, Opinion, and Analysis

Infuriated and “fighting mad” at a press conference in the statehouse following a Supreme Court ruling this afternoon that sided with Gov. Chris Christie’s administration and against public sector unions over a slated contribution to the state’s already beleaguered pension and benefit system, labor leaders joined Senate President Steve Sweeney (D-3) to tear into the high court’s decision, calling it a “travesty” and a “setback” for public workers and the state’s economy as a whole. Seething, they vowed to continue fight for fully-funded pension payments in spite of the decision.  (Brush/PolitickerNJ)

MAPLEWOOD – More than 100 people protested in front of the Maplewood office of state Assemblywoman Mila Jasey (D-27) on Tuesday morning, decrying her support of a proposed bill that they believe hurts the future of charter schools, a critical issue echoed in next-door Newark, across New Jersey and around the nation.  (Bonamo/PolitickerNJ)

New Jersey’s highest court ruled on Tuesday that Gov. Chris Christie could skip the pension payments he promised to make in the signature law of his tenure, averting a huge fiscal crisis just weeks before the state closes its books for the year.  (Zernike/The New York Times)

New Jersey’s highest court ruled Tuesday that Gov. Chris Christie’s administration didn’t overstep its authority in cutting funding for benefits for state workers, a victory for the Republican governor as he nears an announcement on whether he is running for president.

The New Jersey Supreme Court ruling clears a major hurdle for the administration to negotiate a new budget by June 30 and it means the state won’t have to resort to mass layoffs or other emergency measures to put $1.6 billion into the pension system during the remaining weeks of the current fiscal year.  (Haddon/Wall Street Journal)

New Jersey labor unions and Demo­cratic leaders reacted angrily to the state Supreme Court ruling on Tuesday that allows Governor Christie to cut billions of dollars in funding for the pension system, saying they will keep pushing him to honor a 2011 law requiring a $3.1 billion pension payment in the coming budget, which is due June 30.

“We’re going to make sure that not one legislator gets a free pass on this issue,” said Wendell Steinhauer, president of the New Jersey Education Association.  (Rizzo and Adely/The Record)

It’s difficult to imagine U.S. Rep. Albio Sires (D-8), sandwiched between indicted allies on his way back from Washington, D.C., wanting to detrain in Hudson County tonight with a zestful spring in his step.

The ride to West New York, too, would likely hold the temptation to keep driving. For the mayor of his hometown, where Sires himself served as mayor, whom he backed last month, today got stung – for the second time – by an indictment, this one delivered by the state Attorney General. This compounds the agony of the indictment of Sires’ other chief ally, U.S. Senator Bob Menendez (D-NJ), tagged by the feds on corruption charges.  (Pizarro/PolitickerNJ)

Fanwood Mayor Colleen Mahr has a new job – and it’s not exactly what some of her supporters had hoped.  (Pizarro/PolitickerNJ)

The law firm of Bressler, Amery & Ross, P.C. announced today that Thomas L. Weisenbeck, former Assignment Judge for the Morris/Sussex Vicinage of the Superior Court, has returned to the firm as Of Counsel.

Based in Florham Park, Weisenbeck will focus on mediation, arbitration, and special master services, as well as providing litigation counsel to the firm’s clients.   (Pizarro/PolitickerNJ)

In a long-awaited decision today that comes as a boon to Gov. Chris Christie and a blow public sector unions, the state’s Supreme Court ruled that the Republican’s administration does not have to make a slated contribution to a beleaguered pension and benefit system, striking down an earlier lower court decision that ruled the opposite.

In the 115 page document, Justice Jaynee LaVecchia wrote on behalf of the majority that the court cannot be a mediator of fiscal troubles “in place of the political branches.”   (Brush/PolitickerNJ) 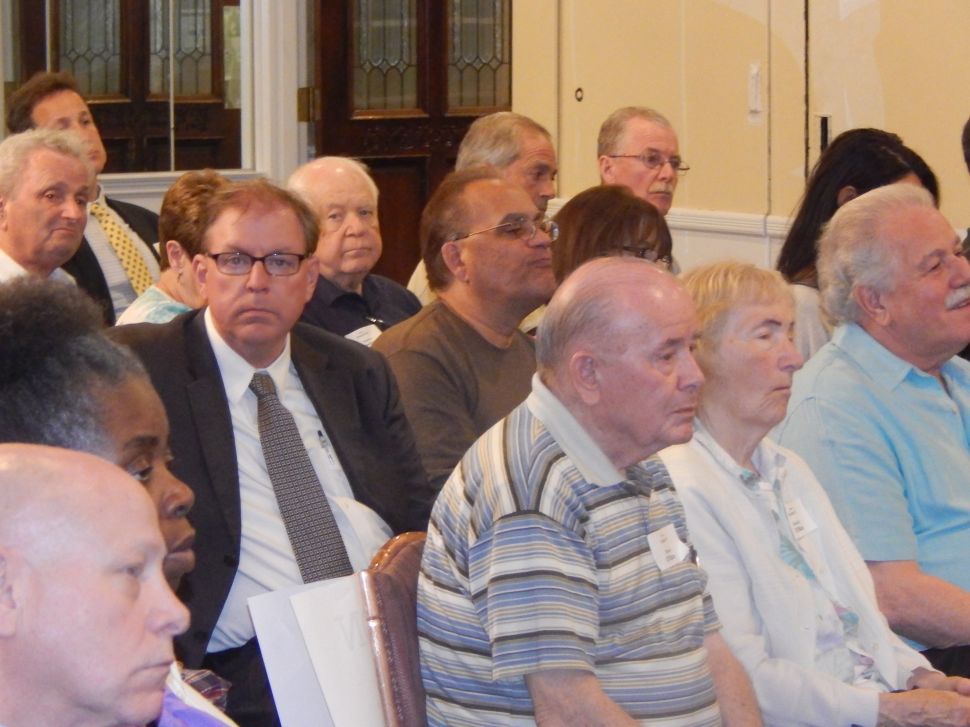