Stop worrying that robots will take over. They won’t.

Do, however, concern yourself with tangible everyday tasks that artificially intelligent machines are accomplishing. Computer scientists are making incredible strides in the field, and the systems they’re developing are doing some pretty awesome things. These feats even stretch beyond what only tech aficionados can understand and actually enter the realm of things and events that are pretty ordinary.

Here is a list of some of those things:

Google’s DeepMind AI computer was presented with 10 classic Atari games, which it went on to master beyond belief just from playing. This video highlights the learning process for the game Breakout. At first, the computer is actually pretty terrible, but after an hour of training (about 200 games), it’s performing measurably better with a 30 to 40 percent success rate. After only one more hour of practice, the software never misses the ball and is playing better than any human could. After even more training, the software sort of outsmarts the game, playing more offensively than defensively by strategically hitting the ball in ways that will help it win more efficiently and with less risk of missing.

2. Learn to play poker and even bluff

In April, Claudico competed in a high-stakes Texas Hold’ em tournament, sans the worry of maintaining a poker face. In fact, Claudico had no face at all; it was an AI bot taking on some of the world’s best players. Months prior, it was given the rules, and it taught itself the game by playing more hands against itself than any professional has ever played in his life. The bot was designed to calculate of among the vast combinations of cards and bets was most likely to win the most chips. He even learned to bluff. In the end, Claudico didn’t beat out the professionals and win the tournament, but he did give them a run for their money. (h/t LA Times)

3. Change how we find music

AI is changing everything behind the scenes at Spotify, the company’s head of deep learning, Nicola Montecchio, told the Observer. They’re introducing new technology that will enable the company to curate music for users more successfully.

“You’ll be able to search by the content of the music instead of just text information associated with it,” Mr. Montecchio, a music information retrieval scientist, said. “This means you can search for truly similar sounding music by actually searching the sound itself instead of doing what we currently do—search a title, image or artist.” 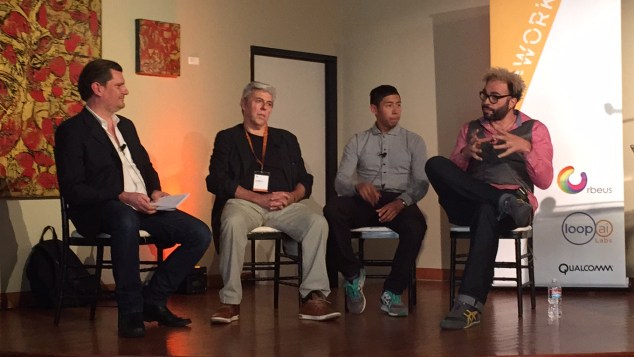 Have you ever bitten into what you thought was a chocolate chip cookie, expecting molten chocolatey goodness only to find dry oats and some raisins? Everyone has. The two varieties look alike. It really is a simple mistake, and when faced with a cookie platter, who stops to look that closely?

There’s now a computer that can distinguish the nearly identical baked treats from each other every time. After seeing only six photos identified as oatmeal raisin cookies and six identified as chocolate chip, the computer learned to spot the difference better than a human can.

What’s the point of this? Well, identifying cookies like a pro isn’t all this machine can do; this was only a simple, concrete example Richard Socher, co-founder of the new AI lab MetaMind, gave of what’s happening in AI when he presented earlier this year at the 2015 Deep Learning Summit in San Francisco.

5. Solve a 120-year-old biological mystery about a worm

A computer programmed by computer scientists and biologists at Tufts University reportedly developed a new scientific theory using its own artificial intelligence with no help from humans. For more than a century, scientists have been puzzled by a flatworm called a planarian and the process by which it regenerates its body parts. The computer analyzed data from pervious studies using trial and error, and after three days, discovered that the regeneration process required three known molecules and two proteins that were previously unknown.

6. Outperform humans on an IQ test

Researchers from Microsoft and the University of Science and Technology of China built a deep learning machine that outperforms the average human on the types of problems that have always been toughest for computers—specifically questions dealing with analogies, classifications, synonyms and antonyms, which fall into the “verbal reasoning” category on the IQ test. These types of questions have always been problematic for machines because they deal with the many meanings words have, but this new program is able to consider the multiple ways a word can be used. When the computer’s performance was compared with the performance of the 200 humans in a sample study, it was found that the computer outperformed the average human and actually reached the intelligence level between people with bachelor degrees and people with master degrees. 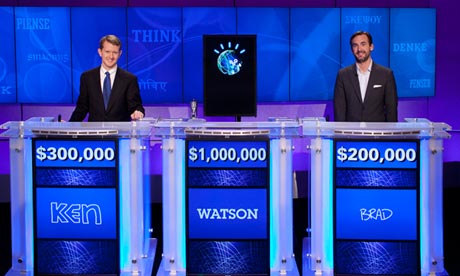 This iconic image from 2011 was a lot of people’s first introduction to the field of artificial intelligence. The AI computer known as Watson was developed by IBM specifically to answer questions on the show, and to do so using natural language. With access to 200 million pages of structured and unstructured content (but no Internet access during the show), the system consistently outperformed its human opponents, only struggling with short clues containing only a few words. Watson won the $1,000,000 prize. (Source: Wikipedia)

Just yesterday, it was reported that an AI computer called MarI/O mastered Super Mario World from scratch in only 24 hours. The system was presented with the game and figured out how to beat it just by playing and using trial and error. The system finishes fast and without dying once, but does skip out on some potential points. Check out the video of Marl/O playing on SlashGear.

This certainly isn’t frivolous, but it is too important not to include. Last year, we reported on the Neural Turing Machine, a computer being developed by Google’s DeepMind Technologies that will combine the way ordinary computers work with the way the human brain learns, enabling it to actually program itself. Neural networks—which will enable the computer to invent programs for situations it has not seen before—will make up half of the computer’s architecture. Experts at the firm hope this will equip the machine with the means to create like a human but with the number-crunching power of a computer. In tests, the computer learned faster and produced longer blocks of data with fewer errors, and the methods were found to be very similar to the code a human programmer would’ve written to make the computer complete such a task.