As the GOP prepares to enter the 2016 presidential primary season with a veritable army of declared and prospective candidates signaling their interest and vying for limited spots in debates, political commentary continues to rage with discussions of establishmentarians versus Tea Partiers, moderates versus true conservatives, and plenty of the usual party infighting on display and set to continue.

For as much as the volume being turned up to eleven on an array of issues may suggest deep party divides on major areas of policy, the reality is that today’s GOP—irrespective of region—is more homogenously fiscally conservative than its decade-prior iteration. The party—for the time being, anyway— has moved and stayed right on economic policy. That’s a good thing for taxpayers, and for Republicans who want the party to stand for something unifying. But it’s most of all a great thing for Republicans who genuinely are fiscally conservative and socially moderate, many of whom inhabit the Northeastern US and have tired of being dubbed “liberal Republicans” over the last ten-to-twenty years because of the public face of the regional party.

Back in 2006, as the GOP was crumbling, a debate was playing out among right-of-center political pundits. Could moderate Republicans, so dominant in the Northeast, really be fiscally conservative, or did their social moderation indicate a thinly-veiled proclivity for fiscal liberalism? Was it possible to be a Northeastern “conservative” without being a barely closeted Rockefeller Republican? Could an anti-tax, anti-spending guy get himself elected and govern or vote in a true-to-himself manner anywhere along the Northern half of the Atlantic seaboard?

Figures like Mitt Romney, George Pataki and Bob Ehrlich made it hard to argue that social moderation was not indicative of fiscal squishiness. The legacy of George H.W. Bush (a Texan who still seems more associated with Connecticut than the Lone Star State in many Republican minds) also factored into this.

Romney, far from being the “severely conservative” governor that he purported to be while running for President, was Exhibit A for the prosecution in this matter. Romney, who served just one term, managed two mediocre “C” grades from the arch-economic conservative, libertarian Cato Institute for his handling of fiscal policy.

Ehrlich, like Romney, served just one term as Maryland governor. Like Romney, he earned mediocre grades from Cato for his fiscal stewardship: A “C” in 2004, and another “C” in 2006. Better than many Democrats? Sure. Conservative? Probably not, at least as judged by the standards of your average Republican voter, both then and now.

The perception endures today: Vote for an “R” anywhere between the Canadian border and Virginia, and you’re voting for someone who will probably raise your taxes if even minor pressure is placed upon him or her.

But that perception is also gravely out-of-date, at least if we are judging by the records to-date of a trio of Northeasterners from the “M” states: Maine, Massachusetts and Maryland.

To be fair to him, Maine’s Paul LePage isn’t a guy you’d instinctively compare philosophically to the 2012 GOP presidential nominee; he has always cut a more conservative profile and been of more organic interest to self-described Tea Partiers than Romney ever was. But govern Maine, a state also until recently represented in the US Senate by two uber-moderate Republicans, Susan Collins and Olympia Snowe, he does. Cato gave LePage an “A” grade in its 2012 and 2014 fiscal policy report cards, evidencing his anti-tax stance. In each of those years, he was one of just four governors nationwide to earn such a grade. Meanwhile, this session, LePage has been trying to slash the income tax and eliminate estate tax by 2019, a move that will further establish these credentials.

Charlie Baker, the Republican governor of Massachusetts, was only elected in 2014, so he is only beginning to build his record as governor. Yet thus far, he seems to be off to a running start where conservative tax policy is concerned. Baker stated he wanted no new taxes pursued this year; the Massachusetts House of Representatives, controlled by Democrats, assented.

Meanwhile, in Maryland, the Republican who along with Baker most shocked political observers around the country with his 2014 win also held the line on taxes this session. Larry Hogan, who Cato Institute Senior Fellow, Marylander, writer and—it must be disclaimed—Hogan volunteer Walter Olson has pointed to as a model for how Republicans can win office in the Northeast, was presented with legislation that, if allowed to become law, would have amounted to a new tax. He held the line and vetoed it—a very good start, at the very least.

The volume of data to go on here is admittedly a little slim. Baker and Hogan have not yet reached the point where they can be assigned grades. Another economic downturn could come, and that could play havoc with the fiscal plans of every governor, nationwide. But at this stage of 2015, the GOP looks different—nationally and in the Northeast, which back in 2006 looked like the hoofed and hocked left back leg of the Republican elephant.

If the tendencies already on display persist, the meme about supposed “conservatives” from East of the Ohio River and North of the Potomac being Democrats-In-Disguise who stand for nothing, and believe in still less can finally die a death. 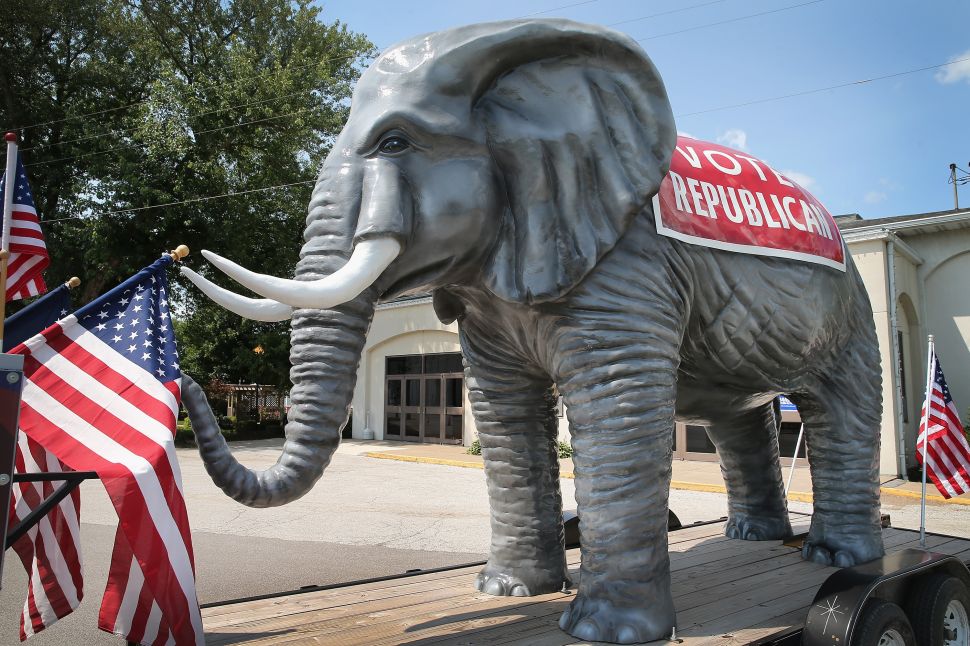