NYCHA General Manager Michael Kelly and Vice President for Development Bill Crawley testified that the “land lease” portion of the plan, intended to monetize vacant tracts of authority property by opening them up for low- and mixed-income development, may involve outright sale of at least two to four as-yet unspecified parcels. Their comments were in response to requests from Bronx Councilman Ritchie Torres, chairman of the Committee on Public Housing, for assurances that the housing authority leaders would not sell property—which former Mayor Michael Bloomberg had proposed as a fix for NYCHA’s ballooning operating deficits and $17 billion backlog in repairs.

“No, we cannot assure the committee that. We’re looking at each deal being [handled] differently,” said Mr. Kelly, quickly adding that the city would retain control of the development process and make sure that any new construction would protect existing residents and new tenants. “What we can assure the committee, though, that we will be driven by sort of the three major principles of ensuring affordability, making sure that we’re looking at NYCHA’s dire financial situation, what it takes to stabilize that and ensuring that we’re in the driver’s seat in the actual construction of the agreements, that we will ensure affordability, that we will ensure rights for our public housing residents.”

Mr. Torres noted that leasing land for development would guarantee consistent future revenues, while an outright sale would mean a single quick pay-off, and inquired why NYCHA would opt for the latter. Mr. Kelly explained that it would depend on location and potential government subsidies available, and emphasized NYCHA had not yet decided which lots it would be putting on the market.

“We have been looking at each deal and looking at that question as a starting point,” Mr. Kelly said. “We are still working out a lot of details.”

Mr. Torres was somewhat incredulous that the authority had no information as to where it might sell its land, noting that the Bloomberg administration studied the possibility for years.

“This is not uncharted territory,” the councilman said. “I imagine the development department has a treasure trove of data.”

Mr. Crawley said the authority would furnish the Council with details on “the first” two to four parcels it was considering selling for housing, 50 percent of which would be affordable and 50 percent at market rates. He added that NYCHA was currently consulting with the city Department of Housing Preservation and Development and Housing Development Corporation about which sites to select.

“As we work within, and with our partners, we’ll come up with an overall plan that will reflect our goals that the general manager just expressed,” he said.

Richard Crouch, NYCHA’s Chief Financial Officer, testified that the entire land-lease program could rake in $300 to $600 million a year, allowing the authority to go from hundred-million dollar operating deficits to an annual profit by 2017—and permitting it to pay for more than a quarter of needed infrastructure repairs within a decade.

Mr. de Blasio’s team projected the “infill” proposal, so named because it would fill vacant land with apartments, will generate roughly 10,000 low-cost apartments—all affordable to a family of four earning $46,000 a year or less—toward the mayor’s overall goal of constructing and persevering 200,000 below-market units citywide. 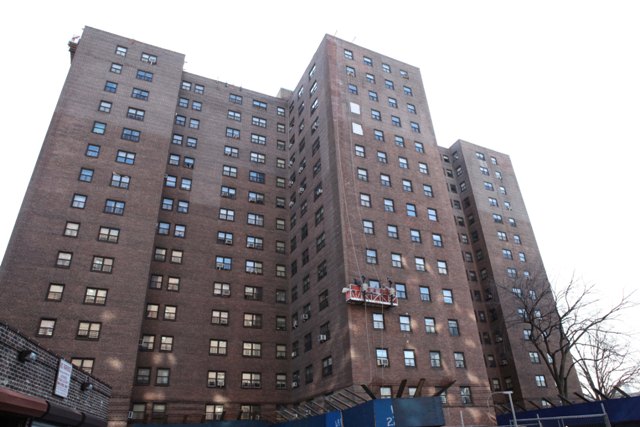