For all the complaints about Barack Obama’s leadership of the free world—that he’s too hesitant, too risk-averse, too passive in the face of danger—he has not been wrong on China. Along with his “reset” of relations with Russia and a military disengagement from the Middle East, the “pivot to Asia” has been the centerpiece of his Administration’s foreign policy.

The basic thinking behind the pivot (I hope) was that the main threat to American world hegemony could only come from China, and thus the focus of American power should be shifted from the zero-win-set Middle East to the Pacific Rim.

Though there were still bad guys galore in the desert, neither terrorism nor Assad could pose a systemic threat to the United States. Even at its most virulent, Al-Qaeda would not jeopardize the basic structures of global democratic governance. The whole alphabet soup of sops to our diplomatic vanity—OSCE, IMF, EMU, UNHCR, OECD, and all the Councils of Europe could survive 9/11. Could it survive a Chinese hegemon? At the very least, some of the acronyms would probably have to be rearranged.

The reset and the disengagement may have disasters—Putin interpreted the Administration’s transactionalism as weakness and the Iranians interpreted its disengagement as, well, disengagement—but Obama was essentially right about China. Whether America’s liberal international order survives into the next century largely depends on its integration of China, and whether China adapts to the rules of the game or builds a new order around itself.

To support that order, the Administration sent 2,500 Marines to Australia, based Littoral Combat ships in Singapore, and began negotiations for a Trans-Pacific Partnership which would solidify America’s economic (and thus political) ties to critical Pacific Rim nations. China’s economic power is its strongest asset in peeling off US allies. If the US has an interest in keeping its friends close, it only makes sense to give them something in return.

As China grows more powerful, though, it was always going to grow more assertive and challenge the limits of the current international order. The current dust-up over China’s island-building around reefs in the South China Sea is nothing that really could have been avoided. When push comes to shove, there’s no reason Malaysia’s claim to Spratly Islands will count as much as China’s. China is bigger. Bigger, better armed, and now sitting on its own fait accompli of strategically placed military installations and landing strips. And there’s not much Malaysia or America can do about it. Ashton Carter is quite right to say, as he did on Saturday, that air and naval operations around surgically enhanced reefs will continue. Unfortunately, those landing strips aren’t going anywhere.

So, strategically, Obama had Asia mostly right. The current dispute is precisely what his pivot was meant to prevent. It was meant to reassure all parties that America was committed to regional stability, the use of force was counterproductive, and that problems could only be talked out at group therapy during ASEAN conferences.

But the irony is that it doesn’t really matter. Unfortunately, the President’s handling of other challenges to the American order has made it abundantly clear to China that when push came to shove, his commitment to stability was empty. Obama’s diffident reaction to Russia’s aggression in Ukraine did not reassure American allies. Nor did the Administration’s Incredible Shrinking Slow-roll of support to moderate Syrian rebels, even after it had expressly committed itself to removing Assad.

And the Iran deal—oh, the Iran deal. Aside from all the nuclear minutiae, as Henry Kissinger and others have pointed out, any deal which de-links a regional settlement from economic sanctions is self-evidently a disaster. We’re giving away all of our leverage (the sanctions) for only one of our policy objective (the nuclear program). What about the others? How do we push back on Iran’s activities in Yemen or Lebanon? Beats me. That rattled our Gulf allies also.

None of these mistakes individually affected China’s behavior in the South China Sea or the East China Sea. Taken together, however, they clearly pointed to an American unwillingness to enforce the current international facts of life. No matter how many Marines it has in Australia, if the White House doesn’t mean what is says about Assad, why should it about the Spratlys? That’s the trouble with credibility: once lost, it is nearly impossible to regain. And it sets up a dangerous situation where every international shoplifter is now tempted to grab as mush as he can before the bonanza ends in January 2016. 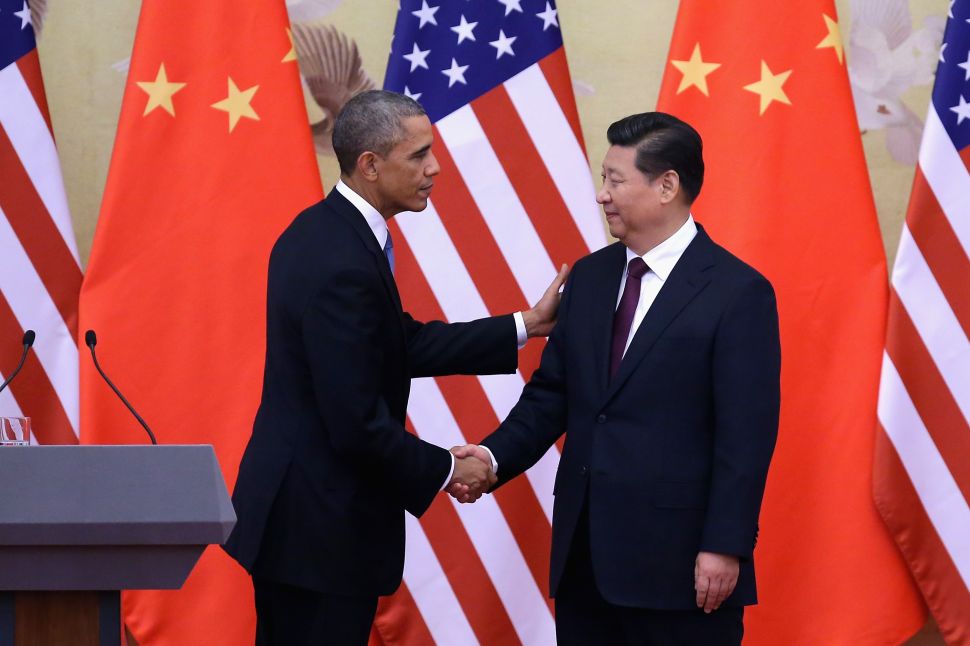