President Obama is fond of saying that he avoids doing what he calls “stupid stuff.” Speaking this week at a meeting of the Group of Seven in Europe the president did something that qualifies as seriously stupid stuff—for the second time in the last year—when he said he has no plan to defeat and destroy ISIS.

When an evil and barbaric enemy such as ISIS is actively and aggressively working to attack America on American soil while it expands the territory it controls in the Middle East, it is the height of folly for any president to publicly announce he does not have a plan to prevent that threat and destroy that danger. That is what President Obama said this week; that is what he said a year ago. It was equally stupid then and now— and stupid is the proper word because no president should ever keep announcing his indecision to address such a dangerous threat to our security and safety.

For more than a year I have been warning in every form of media a columnist can reach, from print and the internet to interviews on radio and television, that ISIS is an evil and brilliant enemy that is waging war against us and using an obvious strategy of social media to attract and recruit Americans and Europeans to launch homegrown lone wolf and small cell attacks on American and European soil.

As of today the most likely outcome of current policy is that at a minimum there will be multiple terror attacks in the coming weeks, months or years against America and Europe that will be similar to the Boston bombing and the Fort Hood shootings. In my opinion the probability of this happening is approximately 97%.

The only thing worse than a president announcing he has no plan is this: if the purpose is to destroy ISIS there is, in fact, no plan that can accomplish this mission.

What is the current policy of the United States, NATO, and Arab League members today to “defeat and destroy” ISIS? The current policy is to engage in large-scale bombing with a grossly inadequate number of ground troops whose mission is limited to insufficiently helping to chose bombing targets while training an Iraqi army that America’s Secretary of Defense says often lacks the will to fight, while training a tiny number of more friendly insurgents on an inadequately long and absurdly inadequate schedule.

This is not a policy; it is a delusion.

If the purpose is to truly defeat and destroy ISIS President Obama has no policy. Congress has no policy. Virtually none of the Democratic or Republican candidates for president, who mostly offer stentorian platitudes rather than coherent strategies or plans, have no policy. NATO has no policy. Great Britain, whose prime minister offers eloquent denunciations of terrorists every time the British people are threatened while he proceeds to withdraw Britain from a leadership role in Europe and the world, has no policy. The Arab League and regimes across the Middle East have no policy.

Another large Mideast ground invasion would be unwise and disastrous but we cannot and will not win the war that ISIS has declared and is aggressively waging against us without some effective component of “boots on the ground” to supplement the air power we are employing, and to the degree we employ air power it should include a no-fly zone over Syria and Iraq.

To believe we can win a war without ground troops defies every lesson of military history, strategic doctrine and common sense from the moment of Creation until today. It cannot be done. Period. End of discussion. This delusion must die the death it deserves before more Americans and Europeans die the death that awaits from the terrorism that is coming if we do not act.

I strongly disagreed then and now with Sen. John McCain (R-Ariz.) and Sen. Lindsey Graham (R-S.C.) when they championed the Iraq war initiated by President George W. Bush. But when they talk in terms today about needing at least 10,000 ground troops to defeat and destroy ISIS they are in my opinion restrained, rational and militarily correct.

The American military is overextended and the world community should be effectively engaged in defeating the most barbaric and evil threat in the history of terrorism.

Here is the plan I propose:

President Obama, our democratic allies around the world and all nations that are determined to defeat and destroy the terrorist threat should go to the United Nations to create a multinational force as the free world united against communist aggression in Korea in the days of presidents Truman and Eisenhower.

They should go to the United Nations Security Council as President Kennedy did during the Cuban Missile Crisis and present the world on international television and mass media with the facts, truths and pictures of the mass murders, atrocities, and genocidal homicides of ISIS and similar terror groups.

With the conscience of the world community rallied to a common cause against a common enemy we should put to a vote of the Security Council the question of creating a multinational force to destroy the terrorist threat that menaces us all.

If the Russians or Chinese veto this force in the Security Council—as one or both of them probably will—we should go to the U.N. General Assembly, as President Truman did under the United for Peace resolution, when the U.N. established the military force that ultimately went to Korea.

A U.N. force would mobilize and rally the world community against the most evil and threatening terrorists the world has ever known, would have the added benefit of setting the stage for a resolution in Syria that secures a period of stability and peace for that besieged land after the mass-murdering butcher Bashar Assad is ultimately removed.

The ISIS terrorists are not ten feet tall. If they are confronted by a world community that is determined to destroy them they will lose their territorial base and be forced into the mountains and caves and will ultimately suffer the fate that befell Osama bin Laden.

As for President Obama the world needs a leader against terrorism offering a Churchillian warning and call to action, not a president who sniffles about his indecision and announces his lack of a plan to win the war that ISIS is waging against us. 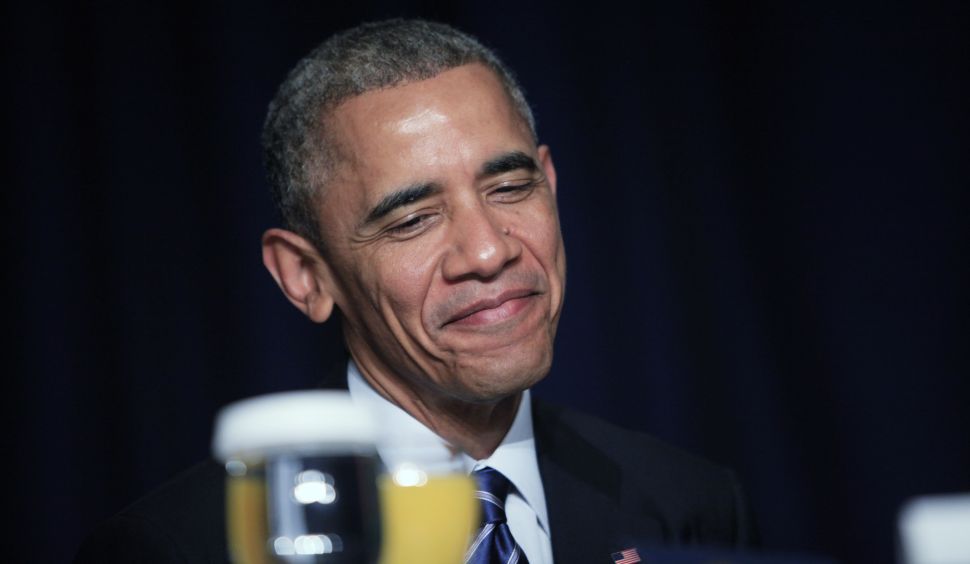