“If everything that can happen happens, then you can never really do the wrong thing,” Will Graham’s hallucination of Abigail told him in the Italian cathedral where her former captor had mutilated a body into the shape of a human heart. “You’re just doing what you’re supposed to.” Will Graham ends up agreeing with himself and dispenses with the Abigail vision all together, which makes sense in the kitchen-sink-style of pop psychology Bryan Fuller’s flawed masterpiece of a show, Hannibal, loves to traffic in. Now in it’s third season, the show is more beautiful, more chimerical, more heteroclitic than anything you’ll find anywhere else on television. Visually it was far more impressive in its baroque grotesquerie than True Detective, a show with the same level of pseudo-intellectualism but way more prestigious buzz surrounding it. And yes, I know that I was part of the problem. Don’t think I’m not manifesting my own Abigail Hobbs out of guilt for even indirectly having to do with its fate now dangling in the air like a fish-hooked angel corpse.

Not that Hannibal was lacking for praise elsewhere: last year Vulture named it their favorite drama of 2014, and gave it a Best Episode award for its Season 2 finale, “Mizumono.”

I have to think NBC was working under the advice of their own Abigail hallucination when they announced, via Buzzfeed last night, that they’d be canceling Hannibal, the critically beloved series, which had hit a pretty significant ratings slump in the third season, “only” catching 1.7 million viewers and earning a .5 in the demo for last week’s episode. For comparison, the show debuted to 4.36 million viewers, the second season started at 3.27, and the third dipped in its premiere episode to 2.57 million.

Maybe NBC,which hasn’t been exactly visionary in quite awhile, thought it was helping the show to move it out of its “death slot” on Fridays at 10 p.m. for the third season, essentially putting it where their Thursday night comedy block used to go. As originators of the term “graveyard slot” (to refer to Star Trek‘s move to the Friday 10 p.m. hour in 1968), Hannibal has never found a death metaphor it didn’t find exquisitely delicious, so NBC’s well-meaning move might have cosmically doomed the series.

But just because Hannibal won’t be dining out on NBC’s bill doesn’t mean that the meat will be left to spoil. Can we just drop the pretense and strip away our artifices of a one-sided clock that is also a stag that sometimes morphs into a snail? Hannibal isn’t over. Hannibal will be picked up, either on a better-suited network, like FX or AMC, or it will go the route of The Mindy Project and Arrested Development get itself a streaming content deal. Because what NBC didn’t take into consideration was that while their coveted demo seemed to be shrinking, the cult fandom behind the series was growing hungrier by the day. Fans of the show—which came out of the box crafted for the age of Tumblr with its stunning visuals, homoerotic undertones just begging for slash fiction action, and GIF-able moments—have already taken to Twitter with their #SaveHannibal campaign, supported by the show’s producers. “Fannibals” were assured by Mr. Fuller that the show’s panel would still be presenting at San Diego’s Comic-Con with new footage from its Red Dragon storyline. (Sadly, my favorite character, Mason Verger as portrayed as Michael Pitt in the second season, has already been replaced by Joe Anderson, so we’ll need a really BIG new Big Bad.)

Hannibal won’t die, because everything that can happen, happens. Hannibal was canceled and it will be uncanceled. If not, I’ll start the damn Kickstarter for the project myself. After all, for all my minor quibbles with the show, I still spent last summer planning my wedding to have a “Hannibal-meets-Carcosa” theme. From a purely aesthetic standpoint, watching Hannibal is always an experience that leaves me feeling like one of the oft-quoted tags of the story: This is my design. And soon, a network will be smart enough to make it theirs as well. 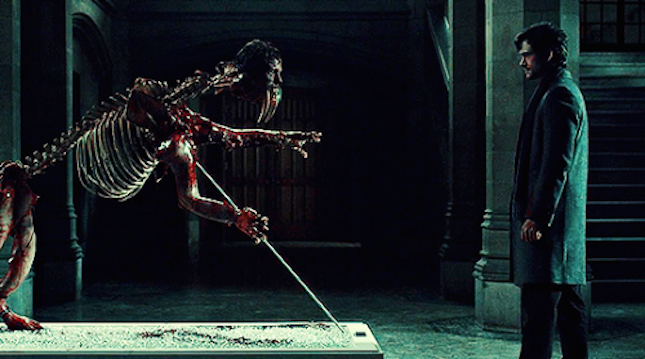