Ban the box is the new black.

A slew of elected officials and activists, along with the author of the best-selling memoir Orange is the New Black, celebrated the expected passage of legislation today that would bar private sector employers from asking whether applicants have been convicted of crimes before they are offered jobs.

“I was in the Council for 12 years. We passed a lot of bills. Some don’t mean anything, some mean a lot–you know what, this means a lot,” said Manhattan Borough President Gale Brewer, a sponsor of the Fair Chance Act when she served in the City Council. “This will ensure that all New Yorkers are considered for jobs solely on their qualifications.”

Known colloquially as “ban the box,” the proposal is already law for New York City agencies and human service contractors. Applicants for most city jobs must be offered employment before they are questioned about their criminal history. (Law enforcement positions are exempt.)

Advocates said on the steps of City Hall that the bill would end discrimination against people with low-level arrests, particularly blacks and Latinos, and open up new avenues for those who have served time in prison and want to reform themselves. 17 states have similar laws.

Joining Council members Jumaane Williams, Corey Johnson, Andy King and Vanessa Gibson was Piper Kerman, the author of a popular memoir about the 13 months she spent in prison on money-laundering charges. The book was turned into a hit comedy-drama of the same name.

“Saddling people with a permanent barrier to employment only adds to existing inequality,” Ms. Kerman said. “Getting a job is the single most important expectation we have for a person returning home from prison and yet there are a host of policies and also prejudices that put that brass ring out of reach for way too many people.”

“This all amounts to a never-ending punishment for people who have frankly paid their debt to society,” she added.

“We want to make sure in this city we fix the structures that are keeping and preventing people from being productive members of this society,” he said.

While similar “ban the box” laws are on the books in 17 states and advocates today said New York City business organizations supports their bill, at least one influential business group reaffirmed their opposition to the Fair Chance Act. The Partnership for New York City blasted the bill, declaring that it put “ideology” over “practicality.”

“There are many positions where employers must consider the background and criminal record of an applicant before offering a job,” said Kathryn Wylde, the president of the Partnership. “A bill like this discourages employers and ends up resulting in fewer, not more, job opportunities for the people the City Council wants to help.” 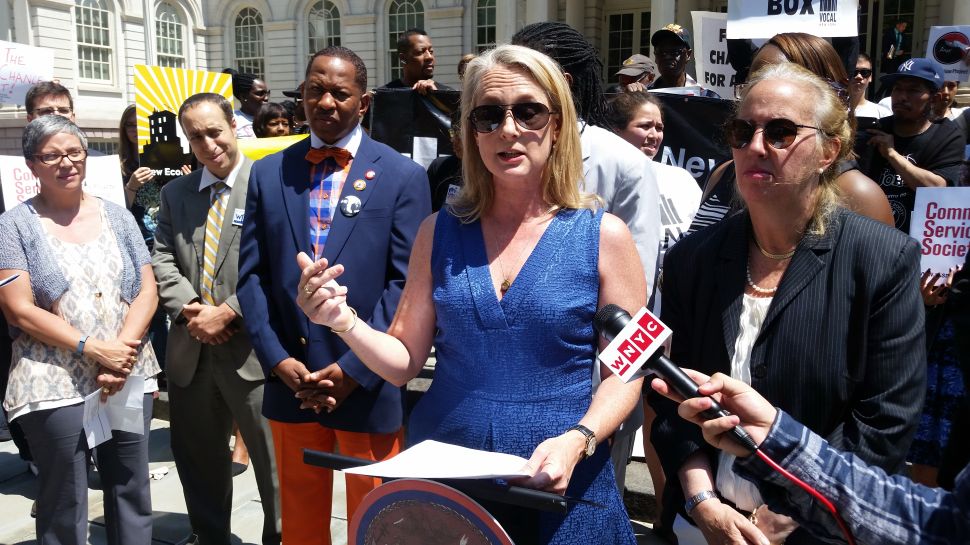