The van’s leaving from Litchfield, but Morello isn’t driving. Instead it’s Pensatucky, looking calmer than we’ve ever seen her, joking with her guards while driving a newly replaced van. Completely unlike the murderous zealot we’ve come to know, Pensatucky appears to actively try bettering herself. After exclaiming that her boyfriend didn’t smoke crack because “cracks for coloreds,” she hastily rectifies her faux pas, exclaiming firmly, “African Americans! Crack is for African Americans.” At least she’s trying.

Pensatucky isn’t the only one who seems at peace. By the resolution of Orange is the New Black’s second season everything seemed, well, resolved. Vee, season two’s primary antagonist, escaped from prison, only to be killed by Miss Rosa and her stolen van (in what remains one of the most satisfying season conclusions, ever). Figueroa was ousted by Caputo, who triumphantly assumed the role of deputy warden after a long history of disrespect from his dismissive senior staff.

So, with almost every loose end resolved (or struck down by a van), Orange is the New Black didn’t have any plotlines season three desperately needed to address—which made for no obligations in the season opener.

The first episode of season three is set on Mother’s Day, which provokes a welcome discussion about parenting in prison. OITNB shines when examining the human condition: who people are, how they’ve come to be, and how they’re not always what they seem. Naturally, a show so focused on the lives of women often explores motherhood—Piper’s strained relationship with her mother, Taystee’s lack of a maternal figure and her resulting idolization of Vee, and Daya and Aleida’s rocky mother–daughter interactions in prison, to name a few.

This episode’s mother–centric theme is OITNB at its absolute best: it was warm, heartfelt, funny as hell, and ended with a harsh, ruthless call back to the reality of prison life. More than that, it was reminiscent of season one—the episode was not necessarily plot driven, but rather propelled by sheer emotion.

This emotion stems from the brief flashbacks of Pensatucky, Nicky, Poussey, Sophia, and Healy. Some are sweet (Poussey gazing adoringly at her mom while they read together, and Sophia pre–transition sings to her unborn son), some are disconcerting (Pensatucky’s mother forces her to guzzle down Mountain Dew so the child acts mentally challenged in order to garner more welfare money, Nicky’s mother coldly ignores her childish attempts to celebrate Mother’s Day). But it is Healy’s memories of his mother that are the most difficult to watch—his mother is deranged, smearing the walls with lipstick and hurling trays of food at her son. He watches on, pathetically hopeless; it’s no wonder Healy grew up with crippling fears and obsessions with women.

Between flashbacks, we see some season two plot lines coming to fruition: Red, after her merciless beating from Vee, returns and cements her tunnel shut (writing “RIP” in the drying cement as a twisted tribute to Vee, no less). Alex returns to Litchfield, completely absent of her flashing eyes and snarky confidence, instead relying on Piper as an almost maternal figure—of course, Piper blames Alex’s return to jail on the system rather than her prompted call to Alex’s probation officer, in typical selfish Piper fashion.

The Mother’s Day pseudo–carnival is a perfect example of OITNB’s masterful juxtaposition of everyday life and prison existence. Children attempt to hit a piñata with their bare fists, as they’re not allowed a stick within prison confines, and use a sanitary pad as a blindfold. Eventually, a guard beats it with a nightstick. One mother happily cradles her infant, but leaves her on the muddy grass outside a portable restroom to do the cocaine snuck in through the child’s diaper. Big Boo’s clown is hilariously demonic, and Pensatucky makes mini grave stone crosses out of popsicle sticks and christens her aborted children with bottle caps of Mountain Dew.

However, after one of Aleida’s children goes temporarily missing, the prison goes on lockdown. The inmates are forced to lie down on the yard, helpless, as their children surround them in confusion, some in tears. It is this lockdown that brings the viewers back. These women are in prison. Some of them are mothers. Some of them are dangerous. Some are both.

Season one of Orange is the New Black was fairly dark (think Pensatucky unflinchingly slicing her palm and rubbing blood on a quivering Piper in an abandoned bathroom). However, season two was all the more grim. Rather than concentrate on a brewing fight between Pensatucky and Piper, season two instead focused on a full–fledged war between Vee, her gang, and essentially all other prisoners.

Season one was comparatively more lighthearted; it felt slightly comic and focused largely on Piper, giving the show a narrow and sometimes grating perspective. Season two, however, did an exceptional job of neutralizing complicated prison politics with sharp comedic writing. The second season further departed from season one’s formula by delving much further into the lives of other inmates, effectively forsaking Piper as the protagonist by providing viewers with newer—and frankly more likable—favorites.

And however different the two seasons are, their finales are more dissimilar still. Season one ended with the complete unravelling of Piper, blood splattering on snow as she viciously beat Pensatucky—viewers are left to wonder whether Piper’s relentless threat was left for dead. Season two leaves no cliffhangers, no suspense. Vee is dead, Miss Rosa is free—the only unanswered question remaining is the fate of Alex, who pulls a gun on her probation officer (however, it’s easy to assume she’ll return to prison).

This opening is an astute answer to season two’s finale. It did little to further any sort of plot formation (besides Alex’s return to prison, which I’m sure will be addresses at length in future episodes), but it achieves what it does best: it’s a bittersweet reminder of life behind bars. Here’s to the return of life at Litchfield.

Stand Out One Liners: 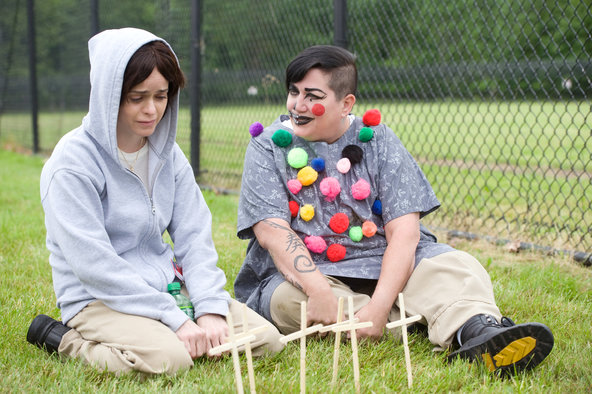