Everyone sure was throwing the word ‘naïve’ around a lot in this episode. Primarily in reference to Crystal Godrich, our (yay!) brand new clone. Crystal, you see, is a “naïve clone”: unlike the members of clone club, who are “self-aware,” she doesn’t know she’s a clone (and everyone wants to keep it that way).

But this is all just misdirection. Because it turns out that when compared with Rachel Duncan, everyone on this show is just as naïve as Crystal. They may think they’re self-aware, but they’re just flailing around in the darkness of their own existences.

There is something truly breathtaking about watching Rachel pull the wool over everyone’s eyes so thoroughly. By the reveal at the end of the episode, you’re almost rooting for her, even though it means our beloved protagonists are going to suffer as a result. She has played all three sides against each other so skillfully, surgically, fooling everyone up to and including: lifelong con artists Sarah and Felix, certified genius Cosima, calculating bosslady Delphine, and ruthless revolutionary Mrs. S.

The plan is monstrous, and Gordian in its complexity. Let’s try to unravel it by working backward. Rachel wants to get out of Dyad, and out of the country. She also wants to retrieve “her” book, the copy of Doctor Moreau with her father’s secret formulae in it, which he bequeathed upon Kira and is now in Scott’s possession. But she’s brain-damaged, aphasic, and wheelchair-bound. And she has only a few scant pieces of leverage: She knows about the book, and knows that nobody else besides Cosima and Scott know about it. And she knows how to read it, which nobody else does.

Her plan involves strategically deploying those small bits of knowledge to every advantage that she can. First, she tells Scott that she’ll only translate the book for Sarah, and only if she agrees to help get her out of the country. She demands that they con naïve clone Crystal out of her ID and relevant info, so that Mrs. S can create a forged identity for Rachel in Crystal’s name.

So Sarah and Felix make the long drive to the manicure salon where Crystal works, where Felix—passing as both straight and Canadian—charms dippy Crystal out of her wallet.

Notice how Crystal’s valley girl routine (or the Canadian version thereof) throws the show’s ongoing nature/nurture debate into an interesting light. All of Sarah’s clones that we’ve met so far have been very smart (though of course what they choose to do with that intelligence varies pretty widely). But Crystal initially reads as quite stupid. It seems like it must therefore be these genetically identical women’s upbringing that made one grow up a neuroscientist and the other a manicurist—suggesting that there isn’t really a genetic component to intelligence here. As the scene goes on, however, we realize that Crystal may only have been socialized to be and act stupid, because there is definitely a sharp mind hiding under that dim exterior. She knows there is something up with the rotation of her boyfriends (who are clearly her Dyad monitors), for example. And she feels intuitively that Rudy’s attempted abduction of her was more than just a random act of violence. Orphan Black continues to complicate the question of where our personalities and qualities come from, finding clever new ways to refuse to come down on one side or the other.

In any case, while Felix and Sarah are off on their con job, Scott figures out how to sneak Rachel out of Dyad and to Mrs. S’s house, where she’ll translate the book before they spirit her out of the country. But again, this is misdirection. Rachel actually wants this escape plan to fail, because she’s made different arrangements of her own to get out of the country without anyone knowing she’s actually gone. Because if Topside knows she’s escaped, they’ll just end up chasing her down and eliminating her.

So, while cutting a deal with clone club, she also cuts the same deal with Project Castor: the translated book in exchange for safe passage out of the country. And to sweeten the pot, a prosthetic eye on the other end. Rachel tells Castor exactly where and when they can find the Doctor Moreau in question, and while Sarah and Felix are off meeting another sister, Rudy drops in on Scott and threatens his poor asthmatic kitty until he gives up the book.

Scott runs right to mommy Delphine, who is understandably pissed that they have been keeping the book’s existence from her the whole time. Not that she has given them any reason to trust her, of course. Which is why Cosima continues to lie, denying that they made another copy of the book, hoping that they can get the plan back on track, sneak Rachel out and get her to translate the copy.

And this is where it gets really tricky. Rachel, banking on the fact that Cosima would both make a copy and lie about it, and that Delphine would be suspicious, tells Delphine about the (first) escape plan, and convinces her that the best way to get Dyad’s hands on the copy of the book is just to let them go through with it. That way, Dyad can surprise them at Mrs. S’s house, retrieve both Rachel and the book, and that will be the end of that.

But of course she’s lying to Delphine too. When Dyad rushes the house on Delphine’s orders, Rachel fakes a seizure and gets put under the care of Dr. Nealon, who is secretly Rachel’s compatriot. In the meantime, Dr. Nealon has gone back to the manicure salon and abducted Crystal. He puts her a medically induced coma, leaves her in Rachel’s place, and hands Rachel over to Castor to spirit her away.

So now Dyad thinks Rachel is unconscious in their facility, while she is in fact thousands of miles away. One copy of the book is now with Castor, who has presumably gotten Rachel to translate it for them. And the other copy is at Dyad, but is useless with nobody to translate it.

A brilliant, perfect plan. It almost makes you feel good for Rachel. Almost.

As fallout, both Scott and Cosima are now out of a job, having thoroughly sacrificed all of Delphine’s trust. But not before Delphine kisses Cosima, and mentions to her that she’s fairly certain her new girlfriend Shay is a spy.

Meanwhile Rachel managed to translate only one page of the book for Sarah and co. before fake-seizing. It’s some kind of nursery rhyme that seems to say that the “Castor original”—the person on whose DNA theirs is based—is in London. So now they’re back off across the pond.

Also, Helena has gone to live with the Hendrixes, still with her secret container of embryos in tow, which may or may not also be the DNA of the Castor original. She dresses up in Alison’s prim clothes, tries to act reasonably suburban, lazily hits on Donnie, and has a tender moment with Gracie, who is now living with Mrs. S and working the register at Alison’s soap store.

And Donnie, consumed with jealousy over Jason kissing Alison, confronts the drug dealer, resulting primarily in Donnie getting the living crap beat out of him. 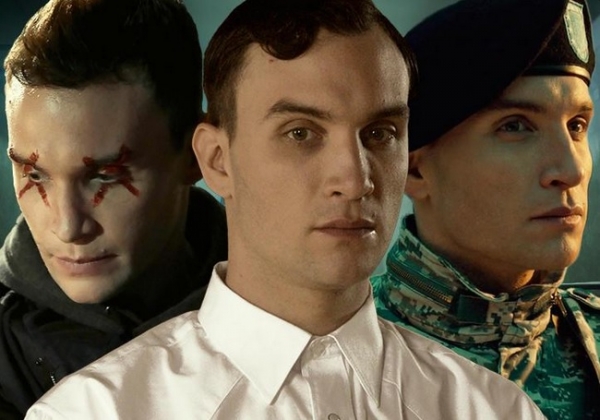