Donnie Hendrix, baby-ox-like though he may be, is not what you’d call a smart man.

After deciding to start a slap fight with a drug dealer in last week’s episode, and obviously getting the living shit kicked out of him, this week he has decided that he can somehow just hide his massive facial injuries from his wife. How long does he expect to pull that off for? Especially now that said dealer is going to withdraw the voucher he gave Team Alison with scary Portuguese drug lord Pouchy, and they’re out of the pill-pushing business, as of immediately.

So while Donnie skulks around so he doesn’t have to admit all of this to Ali, he’s spied by Helena, who interrupts her daily session of making soap, dancing like a lunatic and singing along extremely poorly to ’60s bubblegum pop to confront him about his swollen face. (“I was jogging. I bumped into a post.” “A post made of fists I think.”)

While she tends to his injuries with Ukrainian folk remedies, he admits that his drug-dealing days are done, and he has to return the pills to Pouchy under pain of pain. Oh and, Helena, by the way, as insurance, Pouchy’s goon took a weird refrigerated canister from the storeroom, an object that has absolutely significance to me. So it’s weird that I’m mentioning it to you, Helena, because obviously you have no idea what it is either, right? Right?!

Bad move, Pouchy’s goon. You definitely do not want to come between Helena and her “bebes”—even if those babies are really frozen embryos that may or may not have anything biological to do with Helena. So now Helena is coming along for the ride as Donnie returns the pills. She waits out in the car as oh-so-brilliant Donnie tries to reason with the guy who likes to cut people’s extremities off for sport. Since we’ve returned the merchandise, we really deserve a full refund, right? Right?!

Just as Pouchy is laughing his face off, Helena shows up in a very unconvincing Alison disguise. (Thank god at least one of the sisters isn’t miraculously a master of disguise and fake accents. It was getting harder and harder to believe each time one of the clones pulled off yet another switcheroo, and the biggest challenge was “I can’t see without my glasses,” not “I have no idea how to mimic your British accent.”) Embryos in hand, Donnie and Helena are about to get the hell out of there, obviously sans refund, when Pouchy’s niece decides to go one step further and threaten Donnie and Alison’s kids.

If we know two things about Helena, she’s protective of family, and fiercely devoted to children. (“Did you threaten bebes? You should not threaten bebes.”) And so she closes the door on Donnie, emerging minutes later in a full-on River Tam-style reveal, except with the blood dripping off the blade from a paper guillotine instead of an axe, and the body count belonging to Portuguese drug dealers instead of mindless space zombies. But otherwise pretty much the same scene. Because let’s not forget that Helena is terrifying.

She also has a sack of cash, obviously containing much more than Pouchy owed them. So now the Hendrixes are filthy rich, and they conveniently already have a money-laundering scheme all ready to go.

Almost as scary as Helena in this episode is Delphine, who comes very close to torturing and murdering Shay before being called off by Cosima at the last second. See, Delphine suggested last week to Cosima that it was Shay who gave up Doctor Moreau to Castor. And once the idea was planted in Cos’s head, it has started to seem extremely plausible. So she runs back to Delphine, who, head full of jealous rage, is only too willing to help.

But it wasn’t Shay who betrayed them at all. Nor was it Rachel, as I theorized last week—it turns out Rachel is less a chessmaster-level schemer and more of an extremely clever opportunist, who watched the shifting sands and did what was necessary to effect her own escape.

No, the mole was little Gracie Johanssen, who took Castor’s bait, an offer to be reunited with Mark, and told the military everything they wanted to know. Little pitchers, and all that. Cosima figures it all out just in time to stop Delphine from starting to cut into Shay with a razor blade. But clearly enough damage has been done to kill that fledgling relationship.

And rounding out a trio of terrifying Europeans in this episode is our old friend Ferdinand, who shows up to leave a trail of bodies in his wake as he trails Mrs. S, Sarah and Felix around London. How he and/or Topside found out about their trip is anyone’s guess at this point. But he follows them as they track down the owner of the original Castor DNA, killing all of the people who try to help them.

With a short detour to sing a song in a bar—I’ve been waiting three seasons, ever since recognizing Maria Doyle Kennedy from The Commitments, to hear her sing, and the performance did not disappoint, juxtaposed though it was with scenes of Ferdinand and his silent henchman disposing of one of her friends—they eventually find the Castor original. Turns out, the Castor DNA belongs to Mrs. S’s mother, who is not only the Castor original but the Leda one as well. See, she has two distinct cell lines in her body, having absorbed a male twin in the womb. Doctor Duncan exploited this rare quirk of biology to create his viable clones.

Much like Helena and her right-side heart, Orphan Black once again teases us with the weirdness that already exists in human genetics. You don’t need sci-fi, you don’t need clones, to get your dose of the very strange. Once you peek under the surface, human development is a universe of mystery.

Another mystery: How in the hell did one of the clones created from Mrs. S’s mom’s genes happen to end up in Mrs. S’s care? Surely this can’t be just a coincidence. And yet the show has always maintained Sarah was spirited away from Leda and hidden by Mrs. S. Was Duncan somehow pulling her strings the whole time?

All that and more—including with why hippie faith healer Shay is in a photo an army uniform, and whether Helena and Donnie are really going to get away with killing a drug kingpin—to be revealed in next week’s season finale. 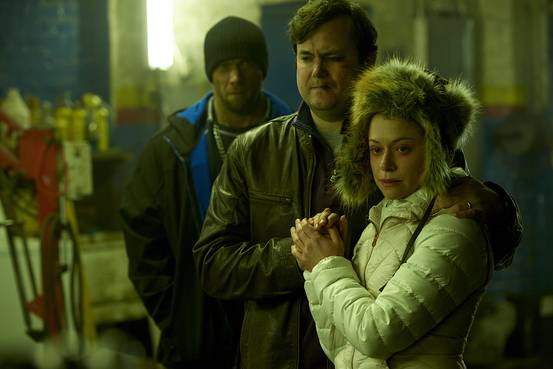