Infuriated and “fighting mad” at a press conference in the statehouse following a Supreme Court ruling this afternoon that sided with Gov. Chris Christie’s administration and against public sector unions over a slated contribution to the state’s already beleaguered pension and benefit system, labor leaders joined Senate President Steve Sweeney (D-3) to tear into the high court’s decision, calling it a “travesty” and a “setback” for public workers and the state’s economy as a whole. Seething, they vowed to continue fight for fully-funded pension payments in spite of the decision.

“We’re here to say that were outraged that the NJ supreme court ruled against 800,000 current and retired members of the New Jersey public pension system by overturning a Superior Court decision that Gov. Christie violated his own law when he withheld state pension payments,” said Charles Wowkanech, president of the New Jersey State AFL-CIO, one of the unions that brought the case against the governor’s administration. “This ruling is disheartening for current and retired employees who have gone to work, lived by the rules and faithfully paid into the system.”

The group convened just hours after the state’s Supreme Court, in a long-awaited judgement handed down this morning, ruled 5-2 to reverse a lower court decision that found Christie in violation of his signature 2011 pension law when he slashed some $1.6 billion from a slated pension contribution for fiscal year 2015. The ruling is seen to have strengthened Christie’s negotiating power in the midst of what is expected to be a hard-fought budget season, as well as bolstered his position ahead of an impending presidential announcement later this month. The Republican is in New Hampshire today, where he called the decision an “important victory” for taxpayers and “limited, constitutional government.”

But at home, the ruling only served, according to union leaders and Sweeney today, to fuel frustrations and a determination among public sector workers to continue challenge the governor on upholding the 2011 law, which saw those workers agreeing to increased contributions in exchange for a promise by the state to make yearly, actuarially-scheduled payments. Earlier today, the head of the state’s largest police union called for a repeal of that law, while other labor leaders have said they would appeal to the U.S. Supreme Court on the case.

Those present in the presser this afternoon called on legislative leaders in Trenton to approve a constitutional amendment requiring the state make scheduled pension payments, and, in a series of particularly harsh critiques, condemned the court’s ruling as a “slap in the face of every public employee in New Jersey.”

“We’re not sad. We’re not scared. We’re fighting mad,” said Wendall Steinhauer, president of the New Jersey Education Association. “Forget about the court. It’s ducked its responsibility. Forget the Governor. He’s an abject failure. Our state is a fiscal basket case. And that’s because of his failed leadership. He’s proved over and over that he doesn’t care a bit about New Jersey. He will do anything and say anything to bolster his pathetic presidential campaign.”

“But here’s one thing he’ll never do: he’ll never get to dictate what happens to our pensions,” he added.

The ruling is likely to be most felt in Trenton this month, as lawmakers work to come up with a spending plan for the coming fiscal year before a looming June 30 deadline. Democrats have vowed to put up a budget that includes a full pension payment likely paid for by a millionaires tax, while Republicans have largely side with Christie in opting for cuts to the system. Political observers note the court ruling gives the latter party an edge in that debate, but Sweeney today said he would still push for a balanced budget that meets the state’s pension obligation.

Meanwhile, Christie has called on all interested parties to “come back to the table” and partner with his administration in further reforming the system.

“We will pass a budget this year again that fully funds the pensions. Because we can. There are choices that are being made here. The governor has made a choice. He doesn’t want to do this. The deal got too tough. He didn’t want to go along with it, because it’s hard work. But we made a commitment. My word mattered to me,” Sweeney said.

Sweeney, who all but sacrificed his relationship with public labor in partnering with Christie on the 2011 pension reforms, said he would confer with the rest of the Democratic leadership on putting forth a constitutional amendment to require the state to make the payments. But he dinged the high court, which he suggested contradicted itself in supporting a contractual obligation between the stater and public workers while ultimately giving Christie a pass on paying into the system.

“Basically what I heard the courts say today is you’re on your own. It’s wrong, it’s not fair, and it makes no sense,” Sweeney said. “We did what they said. We came up with a contract. How does anyone do any business with New Jersey if we don’t keep our word? What do we say, we can pay our contract because we can’t? Because budget language over rides everything?”

“Listen, this is wrong. A contract is a contract. We agreed. And when the governor talks about reform, this was the reform we talked about. This is what he was running around the country saying, look what we did. There. We can get it done. We can do it. Hold me up, and look what Democrats and Republicans do. Well, look what they’ve done,” Sweeney added. 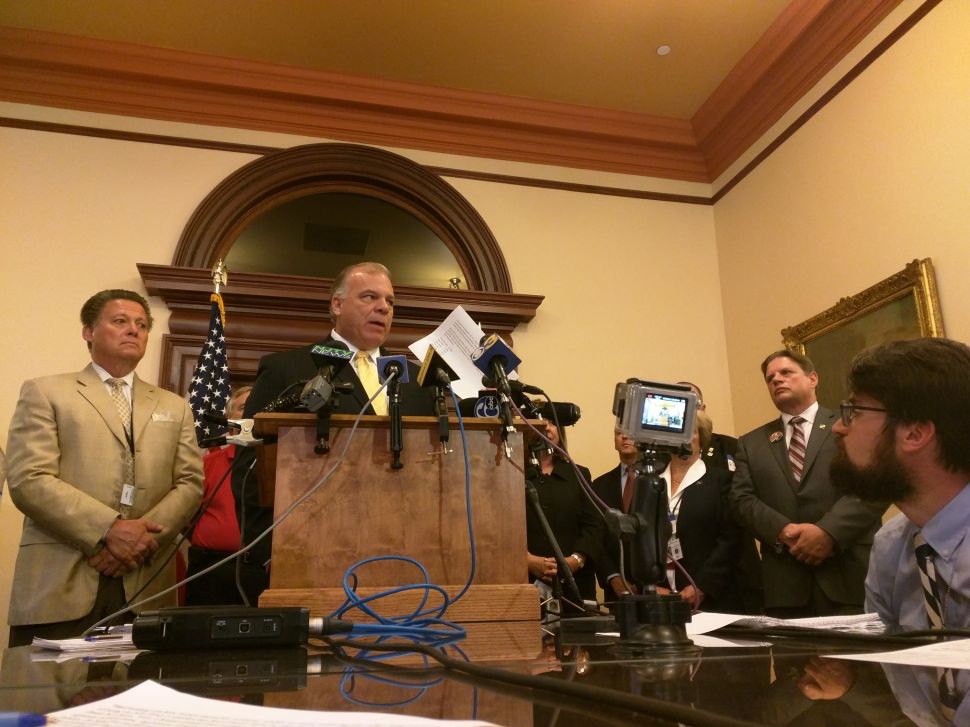