Today Pope Francis issued a powerful, sweeping and historic encyclical of love and faith in defense of Mother Earth. He seeks to inspire citizens to demand from governments actions to save God’s Creation from the ravages of man-made pollution that are largely driven by forces of greed that damage the planet, punish the poor, and worsen economic inequality around the world.

The pope’s passionate defense of the earth will be honored for centuries to come and read from pulpits and megaphoned through all media across America and every corner of the world. His vision will advance the work of environmentalists seeking urgent action from the United Nations summit on climate convening in Paris in December. His visit to the U.S. in September when he addresses a joint session of Congress will have a powerful impact on our presidential and congressional elections in 2016.

When the high court of history renders its final verdicts long after all of us are gone, one of the most faithful friends of Francis in the great cause he champions today will be Al Gore

The papal encyclical released today offers powerful validation and support to the lifetime body of work to protect the environment and combat the dangers of global warming from leading Democrats such as President Barack Obama, former Secretary of State Hillary Clinton, current Secretary of State John Kerry and former vice president and Nobel Laureate Al Gore.

By contrast the papal encyclical and a long list of other causes championed by Francis and previous popes has created a major “pope” problem for many leading Republicans who oppose many of the pope’s most important teachings because they are under the political grip of politically right wing factions, large ultraconservative political mega-donors, and scientifically discredited climate change deniers.

President Obama has made the quest for saving the earth from the dangers of climate change a defining purpose of his presidency from the moment he was first inaugurated in January 2009. When Francis champions the cause of combatting environmental degradation and the man-made dangers to the earth that pollution causes he has a friend in President Obama whose legacy will include his persistent efforts on behalf of the earth.

President Obama’s two secretaries of State, Hillary Clinton and John Kerry, have both been devout believers in the cause of protecting the earth from pollution throughout their long careers in public service that continue today, and for the great cause championed in the papal encyclical today they are faithful friends of Francis, too.

When the high court of history renders its final verdicts long after all of us are gone, one of the most faithful friends of Francis in the great cause he champions today will be Al Gore, who was a generation ahead of his time in defending the earth and has spent a career protecting God’s Creation of Mother Earth from the ravages of pollution promoted by forces of greed that would destroy her.

For the Clintons the cause that Francis champions today has been a family affair as Bill, Hillary and Chelsea Clinton have performed magnificent work of lasting importance through the Clinton Foundation. This foundation deserves far more commendation than it receives from a news-cycle consumed media for its good works in defending the earth and other great causes that will better the world for young people today and future generations.

Those who want to evaluate the potential of a Hillary Clinton presidency and the good works that the Clinton Foundation does for humanity should begin by googling the phrase “Clinton Climate Initiative.” This lasting and landmark work is living testimony about how individual citizens, supporters and donors can serve the cause that Francis summons us to support today. And I would add some high praise for a man that most who are not political insiders may not know. His name is John Podesta and his work as White House chief of staff under President Clinton, White House aide under President Obama, and now Chairman of the Hillary Clinton for president campaign is testimony to what one person who thinks big and cares deeply can do for the cause that Francis teaches about today.

The GOP’s “pope problem” is dramatized by the fact that Republican presidential candidates have already begun to attack the papal encyclical on climate change and criticize positions championed by Francis on a long and growing list of issues such as financial reform, economic equality, equal pay for women, humane treatment of immigrants, and greater food and subsistence assistance to the poorest among us.

It was strange and sad to see one of the GOP frontrunners, whose identity crisis is so severe that his campaign materials now include the word “Jeb” and omit the word “Bush”, feels he must be so subservient to right wing factions that he demeans the papal encyclical and suggests that action against climate change—which he opposes—should be decided by a political process that Bush, while he pockets campaign money from donors whose business pollutes the earth, believes Francis should be excluded from.

It is amazing to watch most Republican candidates for president become so hostage to rightist factions that they deny the very existence of the crisis that Francis warns us to address, and oppose the very actions that Francis summons us to join him in advocating.

When Francis visits the United States his trip will be a defining moment in our presidential and Congressional elections because the message of Francis is so powerful while the messenger of Francis is so credible, admired and respected.

According to a major study from the Pew Research Center in March the pope is viewed favorably by 90 percent of American Catholics and 70 percent of the nation as a whole. There will be a week of national acclaim for Francis and saturation media coverage of his message that will reverberate across the nation before, during and after his visit to America.

Francis has released an encyclical today that will reverberate across the borders of nations and the boundaries of time.

Today Pope Francis summons the world to stake a claim for the future of the earth, to take political action that can move our governments and shape our future, and to take personal action in our lives that can make the world a better and more sustainable place.

No political party, and none of us as individuals, can be so perfect that we meet the highest standards of the greatest faith but we can try. What we do can make a difference, and every so often what we do—individually and collectively—can change the world.

Francis has released an encyclical today that will reverberate across the borders of nations and the boundaries of time.

When you read the morning papers tomorrow you might well see the words of friends of Francis and defenders of the earth such as Barack Obama, Hillary Clinton, John Kerry and Al Gore whose spirit towards Francis in defense of the earth is this: we are with you.

You will also read words from many Republicans who deny climate change and oppose the action to defend the earth that Francis prays for. What many of them will be saying, in effect, to paraphrase the words that once bannered the front page of another newspaper at another time, is this: right wing Republicans to the pope, shut up.

As America approaches Father’s Day while Francis stands up for Mother Earth, this is what elections are all about. The historic encyclical issued by one of the greatest figures in modern world history invites each of us to do our part and make a difference to save our earth, and I stand with him. Do you? 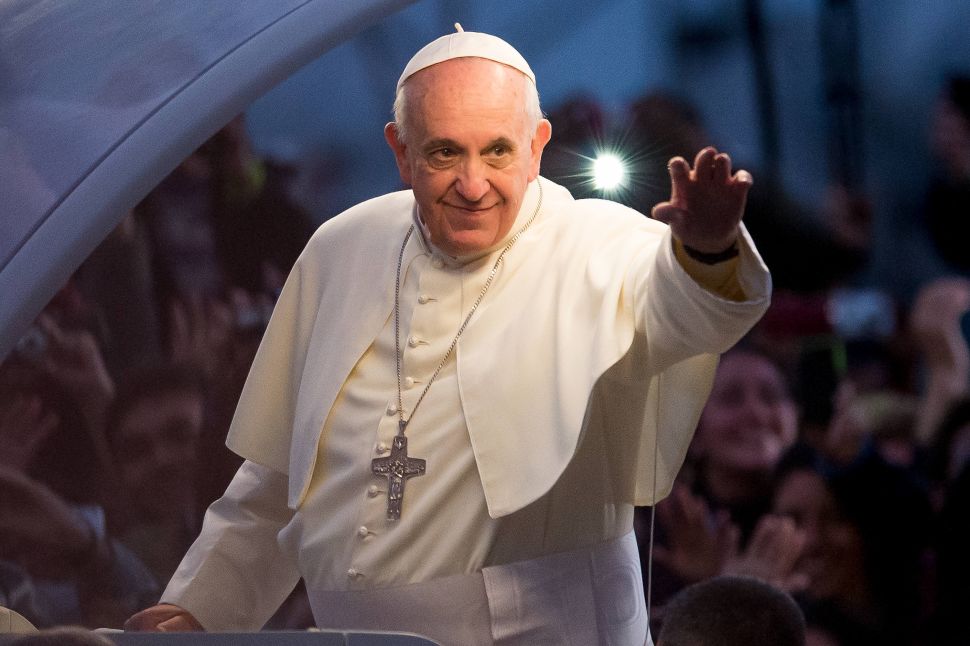