President Obama recently spoke at Adas Israel in Washington, a historic synagogue. His topic: the condemnation of anti-Semitism. In an organized effort, just as the president spoke at this place of Jewish worship, other leaders from all around the world spoke out, simultaneously, against Anti-Semitism. The endeavor was sponsored by Tom Lantos’ Foundation for Human Rights.

Standing at the podium of the synagogue last month, President Obama also spoke about his love for Israel and for Jews, calling himself an honorary “member of the tribe.”

The day before his synagogue appearance, the Atlantic published an interview with the president conducted by Jeffery Goldberg.

The essence of the interview: that Barack Obama is aware of the gravity and the danger of the Iranian threat. The president realizes, that, should Iran get a nuclear weapon—it will be his fault. His exact quote to Goldberg: “It would be on me.”

This is powerful. Presidential ownership and responsibility has not been the norm in this White House. Normal procedure has been to pass the buck. But yet, as powerful as it is to take responsibility for a future Iranian bomb—it is not very comforting. So Barack Obama owns the mistake—but in the end, his ownership does not make Israel or the region or the world any safer.

What struck me most about the interview was not the insight Goldberg gave us into the Obama Iranian genuflection. Nor, how it so beautifully married with the Adas Israel speech.

I was struck by the fact that there even was an interview. That Barack Obama sat down with Jeffrey Goldberg was for me an “aha” moment.

It was Jeffrey Goldberg, in the Atlantic, who gave the White House a huge black eye last October on the subject of tensions between Washington and Jerusalem. It was Goldberg who quoted a senior White House official saying, “The thing about Bibi is, he’s a chickensh*t.”

We were told at the time that this was a huge embarrassment for the White House. Told that heads would roll because of the statement. How could a senior White House official use that kind of terminology to refer to America’s stalwart ally. Some people guessed that the entire storyline was planted. They suggested that the White House wanted to send a clear message to Netanyahu and they chose Goldberg to serve as the conduit who would get their message across.

One thing we know is that the Obama administration exacts discipline. They expect loyalty and they punish those who stray.

So by all Washington rules, the White House and the president should have left Goldberg and the Atlantic out in the cold. Embarrassing the president, humiliating a friend and publishing an ad hominem attack using language that is far below the standard of diplomacy should have been considered treasonous. Goldberg should have been persona non grata.

Instead, just months later, presidential ego prevails and the ugly truth emerges. Those who always believed that the “chickensh*t” statement was intentionally made and printed were right on the money.

Which leaves me wondering, what’s the president’s real agenda behind his very public appearance at Adas Israel.

I know Jeffrey Goldberg. I have known him for years. Jeffrey is honorable and honest to a fault. You might disagree with him—but he would neither bend nor deviate from the truth. And Jeffrey Goldberg would never be party to a deliberate exploitation.

I also understand Washington and the culture of power. Honor does not often enter into their calculations.

This entire escapade smacks of a high level manipulation designed to embarrass Israeli Prime Minister Netanyahu.  And the recent Atlantic interview looks like a reward for Mr. Goldberg.

When the interview in the Atlantic and the Adas Israel speech are married together (as I am now convinced they were intended to be) we are given rare insight into this presidency. It shows Barack Obama’s dedication to fighting injustice and hatred and even shows a love for Israel. 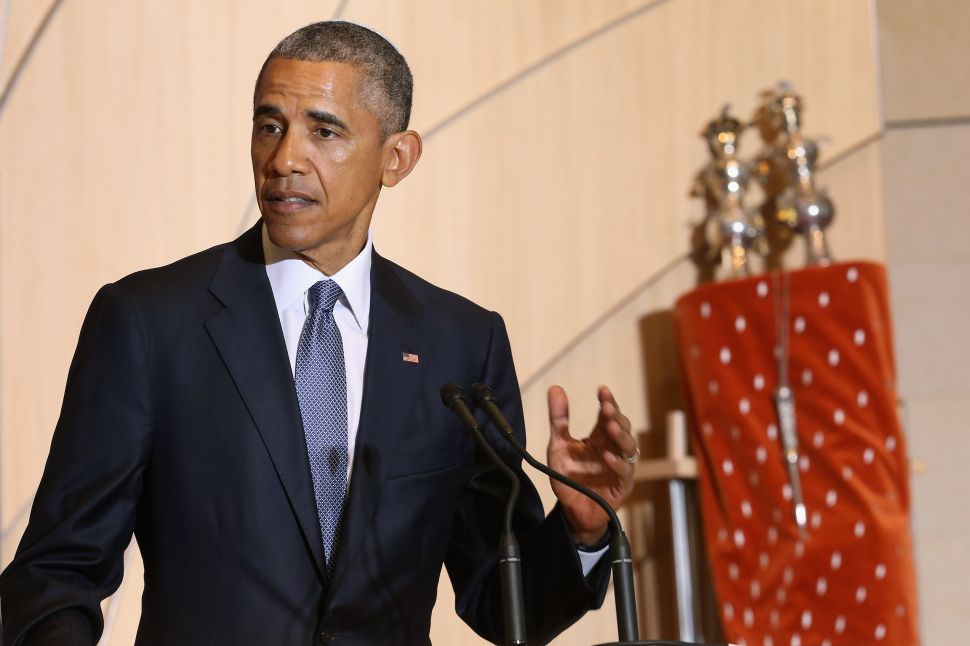