One of the most important debates about liberty and legislation in decades was begun last Sunday night when Sen. Rand Paul (R-Ky.) brought the United States Senate to a halt, delayed passage of the bill to reauthorize massive eavesdropping by the federal government under the Patriot Act, and ignited a serious national discussion about the destruction of privacy by big government and big business across every facet of American life.

With Mr. Paul making his battle against Big Brother a defining issue in his presidential campaign, final enactment of the legislation to renew and slightly limit the authority of the NSA to continue large-scale eavesdropping will mark the beginning, not the end, of the Big Brother debate.

Make no mistake: it is important to continue effective eavesdropping against those who pose a genuine threat to the security of America. We live in a dangerous world. ISIS, Al Qaeda or another terror group could well execute terror attacks against New York, Washington, or communities anywhere in America. Russian strongman Vladimir Putin continues his warlike aggression against Ukraine and poses a significant threat to world security. An increasingly aggressive China, smaller nations from North Korea to Iran, and terror groups pose an immediate danger of cyberwar attacks against America that could do far more damage than our people understand.

The issue before the nation, which Senator Paul correctly and passionately raises, is that the massive bulk collection of data on individuals who do not pose a threat to our security can make the world more dangerous, not more safe.

I have been involved many facets of intelligence policies and practices for many years and wish I could share with you everything I know from my experience with classified secrets of state. Obviously, I cannot, but what is clear from my experience and known from public sources is this:
Too much data, too much information, and too many secrets from spying can clog and overwhelm the system. Spymasters, counter-intelligence leaders, law enforcement and policymakers can become so inundated with information they cannot distinguish between the forest and the trees. While they are overwhelmed in the forest of mega-data Americans are killed by one of the terrorist trees who slips between the cracks created by the huge morass of information and data—which was one of the major mistakes made prior to the terror attacks of September 11, 2001.

While I do not agree with Rand Paul on many matters of national security, he is performing an invaluable service by escalating the issue of massive eavesdropping to the front pages of newspapers, the cutting edge of television news, and the forefront of the presidential campaign.
It is impossible to predict whether Rand Paul’s stand will prove to be good politics, or bad politics, for his presidential campaign. It will elevate him to greater prominence in an overcrowded GOP field and greatly motivate his supporters to advance his cause, which will be a plus, but will also alienate more hardline wings of the GOP, which will be a negative.
It is wrong to criticize Mr. Paul for raising these issues during his presidential campaign. Isn’t this the kind of issue that should be discussed in presidential campaigns? You bet it is! If individuals want to donate money to his campaign because of his stand, or volunteer to work for his campaign, that is great. If others want to donate money or work for his opponents because of their stand disagreeing with Mr. Paul, that is equally great. Isn’t this the American way?

Because Mr. Paul came to Washington and initiated a huge debate about the dangers of Big Brother, it will now be discussed on the campaign trail and during the campaign debates by all candidates in both parties.

The political reporting of the mainstream media, which is too often dominated by moronic discussion about campaign tactics and insider minutiae of the petty cash of politics, will now be forced to cover the stands of Mr. Paul and his opponents about Big Brother and the destruction of personal privacy in all facets of American life.

This is a debate the nation needs to have, and in large measure because of Mr. Paul, America will now have it.

It provides some solace, but not much, that the bill first passed in the House of Representatives transfers some of the authority for initially holding the bulk data obtained through surveillance from the federal government (big government) to the telephone companies (big business). While it provides some benefit to divide power in the world of espionage, there is real danger as well in collusion between big government and big business in the invasion of our personal privacy.
Between government and business Big Brother wants to know what we write in emails, what we discuss on the telephone, where we travel, what books we read, what kind of sex we like, what kind of food we eat, and the brand of paper we prefer when we answer the call of nature, among many other things.

Here’s a little story that illustrates the degree of invasion of privacy from the private sector:
Several months ago I was treated to dinner by a wonderful—and frugal—lady. When we arrived at the restaurant she realized she had forgotten her cell phone, and borrowed my system to retrieve a coupon for a half-priced dinner.

My personal sources of internet access began to think that I was my lady friend, and deluged me with ads not only for women but for this particular woman, after which I knew many of her major shopping secrets. While Big Brother was watching me, Big Sister was telling me (among others) her secrets!

For you guys and gals out there, be careful whose system you use to log onto sites, and for all Americans, be careful of protecting your privacy that is under attack from all sources.
In his battle against Big Brother Rand Paul stands in the tradition of his father, former Republican Congressman and presidential candidate Ron Paul, one of the most principled libertarians of our generation.

These issues create a potentially powerful opportunity for new political alliances between those who might be called conservative libertarians and those who might be called liberal civil libertarians. I would commend to your attention the Ron Paul channel, which is now found at voicesofliberty.com. While I certainly do not agree with every view expressed, there are fascinating and important discussions bringing together Ron Paul, Ralph Nader, Michael Moore and others who are shortchanged by the mainstream media which illustrate the potential for cross-ideological alliances on key issues.

The great decisions about massive eavesdropping under the Patriot Act have largely been made by secret litigation in a secret court, considering secret evidence in secret trials hearing secret testimony, with the court often making secret decisions.

To some degree secrecy and eavesdropping against legitimate terror threats are needed. What is equally needed, and what Rand Paul has begun, is a far-reaching debate about the proper balance between protecting our security and protecting our privacy. America must not act like a nation of sheep who casually tolerate these abuses of privacy, or a nation governed under a cult of secrecy where we are not informed about these matters or debate them as the people of a free nation should.

Yes, there is a grave terrorist threat. Yes, there are evil doers in the world such as ISIS and Al Qaeda and dangers to world peace and security from strongmen such as Vladimir Putin.

But we must be wary of those who counsel that we must surrender our liberty to protect our security, because if we do, we may end up with neither.

By bringing these matters to the forefront of national debate Mr. Paul has performed a great national service. 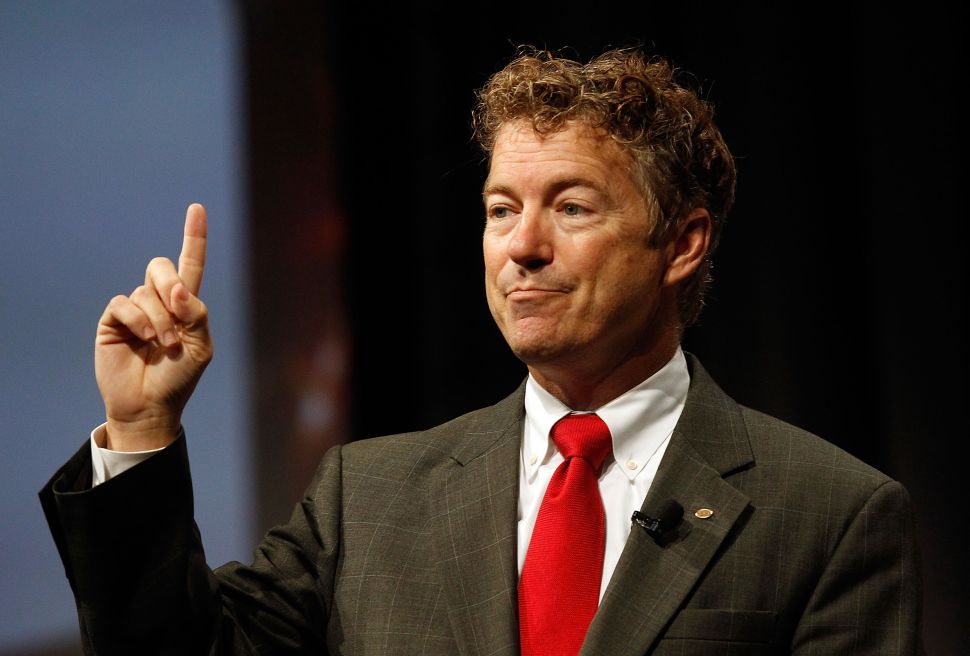