Sex to save the family. (Showtime)

How far Mickey has fallen. He went from living on the beach in Mexico to working his parole job washing dishes and peeling carrots in a sweaty Mexican restaurant kitchen. This Mexican place uses a lot of carrots. Who doesn’t love a fresh order of Carrots Mexicana? Mickey tries to get tough and refuses to peel anymore but he’s told to shut up and gets back to it. Poor Mick’s spirit is breaking.

Bridgette wants to go to private school because she’s wicked smaat. She’s so smart that her guidance counselor called in Ray and Abby to tell them she needs to get out of dumb public school. Their daughter belongs at Bel-Air Academy like such distinguished alumni as The Fresh Prince and Carlton. Too bad big time movie producer, Stu Feldman, has blocked Bridgette from all the private schools in LA back in the series premiere when Stu thought his girlfriend slept with Ray. Looks like smarty pants Bridgette is stuck with the mouth breathing public school dopes. While Bridgette gets praise for her test scores she receives a text from her old boyfriend, superstar rapper, Marvin Gaye Washington. “Where u at shawty?” The kid has a way with words. After the meeting, Ray promises to Abby that he’ll straighten out Stu.

Oh great, that troublemaker reporter, Kate McPherson, is asking questions about Sully Sullivan over at the FBI. It is apparently very easy to get a one-on-one meeting with Director Cochran. Kate starts bringing up Mickey’s name but Cochran plays dumb. Kate’s on to him. You can’t fool that reporter’s instinct with the shuffle around papers trick, Cochran. And what about Sully’s girlfriend? Cochran didn’t even know about her. After he gets Kate to leave, Cochran calls Ray and demands he come to the office. Ray says he’s busy but Cochran threatens to have Ray and his family arrested. An illegal u-turn later, Ray is on his way.

Ray threatens to kill Cochran if he threatens his family again. Seems a little hypocritical but Cochran doesn’t even acknowledge it. Cochran needs the info on Sully’s GF. Oh, her. She’s buried in the desert. Sully killed her. Don’t worry about it. Nobody will ever find her, Ray explains. That sounds like somebody is going to find her. Better get this reporter under control. Ray calls Avi to ask him to find info on Kate and keep her away from Mickey.

Mickey is still peeling carrots. Parole Officer Keith stops by to put an ankle bracelet on Mick to make sure he’s always at work or at home. It’s a bad day for Mickey until he gets a call from Claudette, the love of his life. She needs to meet with him so he sets up a date right after work at Musso & Frank’s. Not so fast. Keith reminds Mickey that he’s only allowed to be at work and at home. Claudette will have to meet Mickey at the gross room that Keith has him living in.

While looking at the new house with Deb, Abby meets a neighbor. Abby can’t seem to understand how this stranger would know that she’s from Boston. Could it that Abby sounds exactly like the movie The Fighter? How rude of that snob to point out Abby’s Cliff-Clavin-from-Cheers-level accent. Abby lays into the neighbor lady about her stupid California accent with her proper pronunciation of the letter A. What a nerd.

Another Marvin text to Bridgette. “Tell me you don’t miss me.” Bridgette texts back that she doesn’t miss him. Minor setback for Marvin but persistence is important. Keep texting, Marvin.

Kate McPherson goes to Fite Club looking for Mickey. Avi’s been following her so he tips off Ray. Kate’s first move is to flatter Terry with the fact that her father followed his boxing career. “My father followed anyone who was white and went more than five rounds.” Karen’s racist dad gets Terry all flattered but he walks away once she asks about Sully and Mickey.

Mickey makes a new friend in his building. An ex-con a few doors down named Shorty. He helps Mick remove his ankle bracelet so he can meet Claudette at Musso & Frank’s. Suck it, Keith. Mick is on the move.

No, he’s not. Keith shows up right away looking for the ankle bracket and puts it back on Mickey. While Keith fastens it on, Mickey notices the very expensive watch he’s wearing. You know who else has an expensive watch? Ray! There’s only one way this guy got a nice watch and that’s from Ray Donovan as a bribe. Mickey asks Keith where he got it and how much it was. Keith answers quickly but won’t say how much he paid. Mickey tells Keith he paid for that watch with his soul. Keith is so busted. Don’t wear your bribery watch on the job, silly. Everyone knows that.

Ray goes to the gym to see what’s up with the reporter. Kate presses Ray for info on Mickey by flirting with him. I guess that’s what standing too close to Ray is. Ray out-charms her and sends Kate away with nothing. He doesn’t even admit that Mickey and Sully knew each other. Looks like that reporter problem is taken care of.

Stu’s plan to have sex with Lexi Steel is to pay her money, present himself as a porn actor named Rod and film the sex. Lexi and her producer/husband meet Stu on one of his big Hollywood sound stages while there’s no crew working. The set looks like it’s for a post-apocalyptic movie. When the producer asks about the camera man Stu pulls out a camera and says he shooting it POV. Everybody seems happy with the arrangement. Lexi and Stu are having sex until he decides to drop the camera. Lexi calls out, “Ricky! Camera down!” This must happen a lot. Lexi’s husband jumps up and punches Stu right across the jaw. Stu thinks revealing he’s a powerful movie producer will get Ricky to back off. Ricky responds by stomping on Stu’s face.

Abby visits the shrink, Dr. Finkel, by herself. Even though Ray is doing everything for the family she’s asked for, she is still unhappy. The doc asks if they’ve talked about Ray’s sexual abuse. Come on. He’s buying the house, getting Bridgette into private school, and you want him to talk about getting molested too? Dr. Finkel tells Abby that Ray is bribing her.

Lexi and Ricky have kidnapped Stu and make him call Ray. Ricky wants $200k to let Stu go. Stu promises Ray that Bridgette will get into Bel-Air if he gets him out of this.

Kate is watching a Sean Walker movie, Black Mass, with her friend whom she is staying with in LA. Luckily Kate reads all of the credits of movies that she watches on TV and sees that Mickey Donovan was a consultant on the killer priest action movie. Hmmm, “consultant. That’s got to mean something. Kate calls the parole office claiming to be from a coffee shop, saying  Mickey applied for a job there and forgot to write down his address. Kate gets the info because the LA parole office is open after 10pm and gives out home addresses to anybody who asks.

Ray and Lena show up at Ricky’s with the money. As soon as he steps through the door Ray punches Ricky in the nose for kidnapping his client. While Ricky counts the money Ray convinces him that he doesn’t want the money because it’ll make him a kidnapper and Lexi a whore. Besides that, there’s something that would be even more useful than $200k to Ricky. Ray leaves with the money and tells Lena to take Stu back to the studio.

Keith calls Ray to tell him that somebody called for Mickey’s address and got it. Ray says, “Get him out of there as fast as you can.”

Another text from Marvin to Bridget. He’s outside her house. Now he’s ringing the doorbell. Bridget answers the door. Marvin tells her that he misses her. She tries to get rid of him because she’s afraid Ray will freak but she seems happy Marvin is there.

Kate arrives at Mickey’s apartment but she finds Ray waiting for her and no Mickey. She asks Ray what he’s so afraid of. There seems to be some sexual tension. Ray asks, “You want to go get a drink?”

So what did Ricky want more than that bag of money? We see Lexi is in Stu’s big budget apocalypse movie. I guess she’s going to be non-porn actress now. That wraps up that storyline.

Ray and Kate are having that drink. Kate is convinced that something is up because she’s blocked from talking to Agent Frank Barnes and Mickey. The two are seeming very friendly.

Mickey gets to meet Claudette at Musso & Frank’s since Keith had to get him out of his apartment. Claudette is worried because the cops keep asking her about Sean Walker. Mickey used her as an alibi because he was there when Sean was killed. Claudette she loves Mick but she’s scared. Don’t worry, Claudette. Stick to the story and everybody is cool.

A few drinks later Ray tells Kate about his wife and kids. Kate loosens up more. Ray finds out that she knows the FBI is lying about Sully being in LA for six months, that Sully’s girlfriend is either being hidden or dead, and that Ray is hiding something too. Ray says Sully would have called Kate a “real pissah.” What is Ray going to about Kate? It looks like he might have sex with her to throw her off the story. That man will do anything for his family. 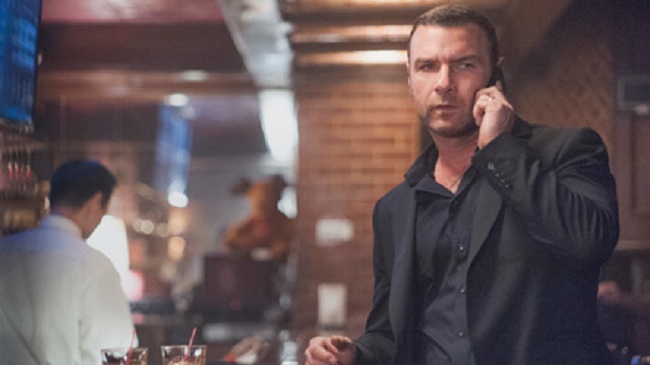