Telling reporters that they were “royally screwed,” tenant activists and a Democratic city councilman blasted Gov. Andrew Cuomo today for failing to bolster rent regulations as much as they had hoped.

Gathered outside Mr. Cuomo’s Midtown office, the activists from left-leaning groups including Make the Road New York, New York Communities for Change and Crown Heights Tenant Union called the Democratic governor a Republican, said he had done the equivalent of urinating on them, and even claimed he would be arrested before he sought re-election in 2018.

“The deal that is about to be voted on is worse than the deal in 2011. They have done absolutely nothing to help tenants in New York City,” said Councilman Jumaane Williams, a Brooklyn Democrat and chair of the Council’s housing and buildings committee. “They might as well have passed a straight extender a few weeks ago and saved people the energy in believing they would do something to help us.”

“They have coming on us,” he added, “that looks yellow and they are just calling it regular .”

Mr. Cuomo said that the agreement will raise the threshold at which a landlord may remove apartments from the rent control program. That threshold would rise in the future based on increases in regulated rents approved by the Rent Guidelines Board.

He also said that the new regulations would raise the level at which a property owner may pass the costs of major capital improvements, or MCIs, to buildings along to tenants.

“It was almost unimaginable to have this kind of change this year. We have two new leaders. Both leaders stepped up and performed,” Mr. Cuomo said yesterday. “It is an unprecedented package to protect tenants.”

But tenant activists felt just the opposite. Though Senate Republicans are closely aligned with the real estate industry and helped thwart any significant strengthening of the rent laws, activists and some liberal politicians are blaming Mr. Cuomo for not using his leverage to help tenants–and implicitly propping up the Republican majority. (They also did not blame Mr. Heastie for accepting what they thought was a bad deal.)

Tenant groups wanted the repeal of vacancy decontrol, a policy that allows landlords to remove rent-regulated apartments from the program if they become unoccupied. At the press conference today, they estimated as many as 100,000 apartments would leave the system in four years under the new agreement.

“We’re going to lose 80 percent of the apartments that we would have lost under the current system,” said Tom Waters, a housing policy analyst at the Community Service Society. “This is not anywhere near an adequate response to the erosion of affordable housing.”

Esteban Giron, an organizer with the Crown Heights Tenant Union, alluded to the federal government’s investigation of Mr. Cuomo’s shuttering of an anti-corruption commission. He said Mr. Cuomo would be “arrested” before activists even had a chance to vote him out of office.

“With my religious background and as a brother in Christ, I have to say, you need to get yourself to a confessional booth and take care of that,” Mr. Giron said. “I’m not gonna threaten to vote you out of office in three years because I think you’re going to be arrested by then.”

Mr. Williams told the Observer he regretted not speaking out against Mr. Cuomo when the governor sought re-election in 2014.

“I think a lot of Democrats are regretting supporting him,” Mr. Williams said. “I stayed out of the race. I regret staying out. I should have supported someone against him.

Mr. Cuomo’s office did not return a request for comment. 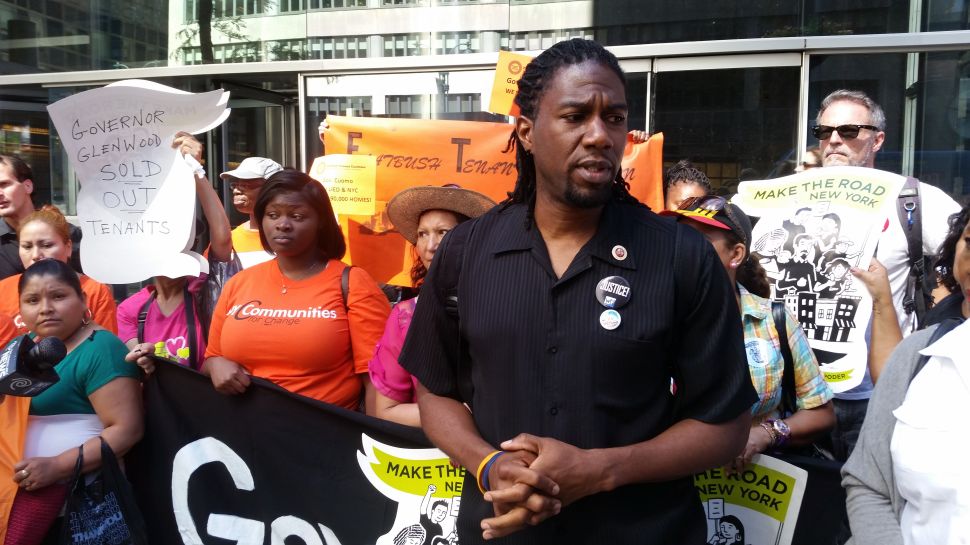