Russian oligarchs made their fortunes during the lawless 1990s via state asset grabs, corruption and just plain theft. At some point, these newly made men acquired a taste to send their children to the most prestigious private schools abroad, like Eton College in England, so at least their descendants could have a chance to become all-bleached respectable gentlemen. But today, they don’t know what to do with their rebellious grandchildren who refuse to follow the script and just want to have fun.

Well, in their own way.

Igor Nekludov, whose total assets, according to unofficial estimates, are about 150 billion rubles ($2.8 billion), is the founder of about ten large companies in the city of Khabarovsk, which is on Russia’s Far East and is as close to Tokyo or Beijing as to the nearest big city in Russia itself. Among Mr. Nekludov’s holdings include the largest office buildings in the city, a local television station, a network of movie theaters, the largest tourist complex in the region and some lesser trifles like chains of fitness-clubs and saunas.

The 68-year-old billionaire most likely wants the world to forget how he built his empire in the bloody 1990s.

Close friendship with former all-powerful Regional Representative of the Russian President and at the same time former Governor of Khabarovsk Region Victor Ishaev helped him receive the best and biggest chunks of property in the center of Khabarovsk for his development company.

Back then and now, his main rule – “always stay in the shadows” – helped him avoid conflicts with the law-enforcement agencies fighting organized crime. Today, the members of his clan are helping him to run the empire.

His daughter, Larissa Mamourina, owns the development company Dalreo and the Khabarovsk chain of ‘World Class’ fitness-clubs. Her husband, Konstantin Mamourin, former karate fighter, works under his father-in-law and owns a construction company in Moscow.

Mr. Neklyudov Sr. has had good reasons to stay in the shadows – in 2010, his 18-year-old granddaughter Anna-Maria Mamourina was kidnapped and, according to the rumors, returned to the relatives only after 50 million rubles ($1.5 million) ransom was paid to the kidnappers. Upon her release from captivity, she was immediately sent to London never to return.

Mr. Neklyudov is so secretive that the newspaper Svezhie Novosti states that there is only one picture of him available on the Internet.

That sense of discretion means Mr. Neklyudov must be furious lately. Last May, his 16-year-old grandson Gregory Goldsheid, who lives in Moscow, broke a family taboo against publicity by starting his own YouTube program, scandalously titled “Money Solves Everything.”

The golden boy’s channel created uproar in Russia and a major headache for the oligarch granddad.

And not without reason.

On his first video (more than 2.3 million views), Gregory was filmed in the center of Moscow in the company of his foxy girlfriend inside a white Mercedes CLS550. “Today we came to Gorky Park,” he declares, “to find out what kind of humiliations people are ready to suffer for money.”

He gets out of the car and the fun begins. First, he approaches a group of girls passing by on the promenade and offers them to drink his urine in exchange for money –“10,000-15,000 rubles.”

“For how much money would you drink my urine?” he asks another two girls. It’s a “no” again. Another two girls and again – “no.” Eventually, by the pond, our handsome young hero finds a male park visitor who agrees to drink a glass of the golden boy’s urine for 10,000 rubles ($185), and takes him to the back alley, then urinates into a glass jar (judged by the video, his bladder was full to its limits).

After the urine is downed and the victim of this ‘performance’ walks away with the money, Gregory’s comments, directed to his audience and full of curses, are: “What a real garbage this guy is! Urine was even running down his mustache!”

Inspired by the success of the enterprise, the golden teenager sets about looking for the next candidate for the ugly act. But the one he finds sitting on a bench sends him into a flight over the bench with a powerful right hook.

No longer in the mood for the urine experiment, oligarch’s grandson starts a new one – having approached the teen-aged girls (judging by the sound of their voices and their vocabulary) he asks them if they would undress for him right here and now for 5,000-10,000 rubles. One “no” after another… but then – success! For 15,000 rubles ($280) the 16-year-old finally finds a young woman who agrees to take off her clothes and walk topless in the middle of a busy promenade.

Next the budding YouTube sensation cooked up a “Let’s Feed the Homeless” project. Here Gregory buys 2 cans of caviar in a nearby store ($46 each) and feeds them to the homeless alcoholics on a Moscow street. In return, the lucky winos call on Gregory’s viewers-to-be to subscribe to his channel and to add ‘likes’ to his videos.

Having fed the homeless, the oligarch’s grandson reveals his next great idea. On the 4th of July he is going to throw around a huge sum of money – the place and time to be announced shortly.

The golden boy has other videos on YouTube, all featuring high production values and professional graphics.

On the latest one, which has more than 1,7 million views, he pays stranger girls to kiss them (1,000 rubles), to show their breasts (2,000-5,000 rubles—“It’s easy money, you just pull up your T-shirt and show me your breasts for two seconds”) and to eat money – 1,000 ruble banknote eaten for 5,000 rubles reward. “Shall I just swallow it?” asks the Gorky park female visitor. “Whatever, you can chew it up first, if you want, I have never seen money being eaten, you know” is the answer of the oligarch’s grandson.

The videos didn’t go unnoticed. TV channels and newspapers in Russia devoted time and space to golden boy’s life, ideas and plans for the future. The major topic was the oligarch grandson’s belief in the power of his granddad’s money and the disdain and disrespect demonstrated by a 16-year-old for his less fortunate countrymen. Public outrage was mostly focused on the issue of a teenager having so much of his oligarch grandfather’s money to spend on these strange fads, rather than the possible criminal character of his public actions.

All the uproar toward what he calls his “social experiments” pleased Gregory a lot – in the beginning. One could arrange an interview with Gregory only through his press secretary.

As the scandal grew, however, his parents, who first declared they did not want to interfere with whatever undertaking their son was engaged in, began to worry. There were telephone threats to the reporters and at least once the golden boy’s mother personally called one of the TV networks trying to direct the coverage of the news story. Family lawyers got involved. Gregory had to apologize and even said that some of his “experiments” were staged.

As is clear from the interviews he has given, Gregory has big dreams and big plans. After high school he wants to study at the prestigious MGIMO college in Moscow—Russia’s Yale—a school that prepares country’s diplomats.

Thus far, his high school achievements do not look very impressive. For example, he could not answer a reporter’s simple questions like “What sea does the Volga River flow into?” or “What books did Dostoevsky write?” Nevertheless, he’s confident that in the end he’ll be be accepted!

If not, one assumes there’s always Eton College in England. 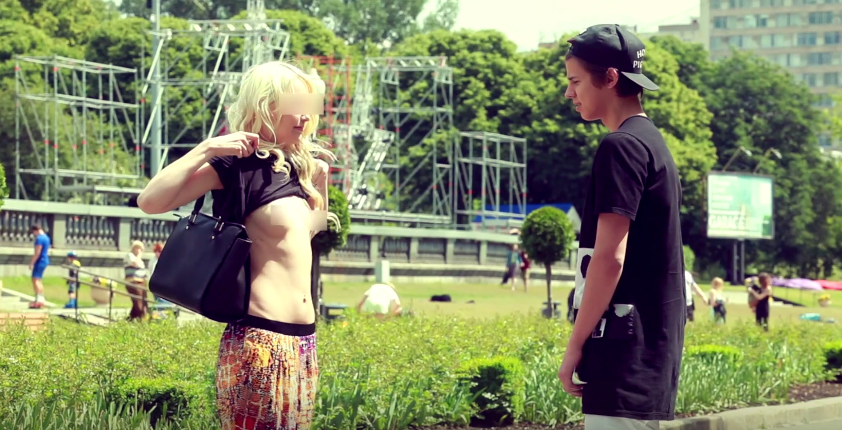