In one of the stranger developments in the conflict between Russia and Ukraine, Ukrainian President Petro Poroschenko recently appointed former Georgian President Mikheil Saakashvili as governor of the Odessa region. Mr. Saakasvhili, who had served as his country’s President between 2004-2013, had been spending his days since leaving office alternating between being one the world’s most outspoken supporters of Ukraine’s struggle against Russia, and enjoying a hipster lifestyle of semi-retirement in Brooklyn. Meanwhile, the Georgian government has indicted Saakashvili on charges related to the violent dispersal of protests and other malfeasance.

At first glance, this seems like a very strange move by the Ukrainian President, not least because Mr. Saakashvili is not even Ukrainian. However, since taking the appointment, Mr. Saakashvili, who had been a member of Mr. Poroschenko’s Council of International Advisors, has given up his Georgian citizen to become a citizen of Ukraine. The appointment seems to indicate a belief, on the part of Mr. Poroschenko, that in a country of well over 40 million people, there is not one person who is sufficiently smart, incorruptible, loyal to the President and visionary enough to serve as governor of this key region. Additionally, in recent years, many critics of Vladimir Putin, including Ukraine’s current Prime Minister, have argued the Russian President is seeking to reconstitute the Soviet Union. Yet, now it is Ukraine’s President who is behaving as if he is not exactly clear that Georgia and Ukraine are separate countries. Saakashvili, after all, is only one of several Georgians, all previously part of his government, who are serving in very high level positions.

Georgia’s new Defense Minister, Tina Khidasheli, a staunchly pro-west figure in Georgia, summed up the feelings of many, although not certainly not all, Georgians towards Saakashvili and this appointment. “Georgia’s former President simply committed yet another act of treason. With this step it became very obvious how loyal he is towards his homeland. The citizenship of our country, which is so precious for all, is worth nothing for him.”

There are, however, reasons why the appointment of Mr. Saakashvili to head the Odessa region, a place of great import in Ukraine’s struggle against Russia, that is considered by many to be the most corrupt part of Ukraine, could make sense. Mr. Saakashvili, who came to power in 2003-4 amidst peaceful protests followed by a huge electoral victory in what came to be known as Georgia’s Rose Revolution, did extraordinary work in reducing low level corruption in Georgia. He may be best known for firing all of the police in the capital, Tbilisi, and replacing them with new police officers who were not corrupt, but President Saakashvili also dramatically reduced corruption in areas such as education, local government, customs and infrastructure. President Poroschenko is betting that Mr. Saakashvili can now bring some of that anti-corruption magic to Odessa.

It is hoped that the dynamic Mr. Saakashvili will push through reforms and excite citizens around ideas. For example, the Georgian people’s broad support for Europe and NATO is, at least in part, a result of Mr. Saakashvili’s vision and leadership. If Mr. Saakashvili can channel that energy and charisma to build a consensus in Odessa, where opinion about Moscow and Kyiv is currently divided, against Putin and corruption and in favor of democracy and the new Ukraine, both he and President Poroschenko will look smart.

Brian Mefford an American business and political consultant based in Kyiv characterized Mr. Poroschenko’s gamble on Saakashvili as,

”Ukraine needs results from reforms, not comfy government posts for Georgian politicians in exile. Either the reforms Saakashvili did in Georgia are transferable to Ukraine, with Odesa being the test case, or not. Saakashvili is like that player who talks a lot of smack off the field and now the coach is telling him to ‘put up or shut up’ and ‘let’s see if your fastball still has it.’”

Unfortunately, recent evidence suggests Mr. Saakashvili may have lost bit off his fastball. There is another side of Mr. Saakashvili’s Presidency in Georgia, one that was characterized by limited freedoms of media and assembly and tarring all opponents as pro-Russian in what one Georgian friend used to call “McCarthyashvilism.” Although, Mr. Saakashvili’s anti-Russian bluster has always been impressive, his judgment has not always been. An EU report, for example, placed much of the blame for Georgia’s disastrous 2008 war with Russia at the feet of Mr. Saakashvili. His tenure was also characterized by violently dispersing several demonstrations, stubbornly high unemployment and widespread abuse of prisoners. This last issue was particularly significant because under Saakashvili Georgia had one of the world’s highest rates of incarceration.

More significantly, almost all of Mr. Saakashvili’s major accomplishments as President occurred between 2004-2007, so he is almost a decade removed from his impressive corruption fighting work. Thus, Mr. Poroschenko is betting that his new governor of the critical Odessa region can capture the magic from eight years and one country ago. I loved Bernie Williams too, but on the off chance the Yankees make it to the World Series, I am pretty sure I don’t want him batting cleanup, but Poroschenko has done the political equivalent.

There is an international political dynamic to this appointment that is significant as well. Mr. Saakashvili has for many years been part of the global neoconservative movement. His biggest international supporters remain the European People’s Party and Republican hawks such as Senator John McCain (R-AZ), who have willfully ignored the excesses and failure of Mr. Saakashvili. In the last years of his presidency, no trip to the US was complete without visiting a conservative Washington think tank and appearing on Fox. His appointment by Mr. Poroschenko indicates that the Ukrainian President is, wittingly or not, moving the Ukrainian cause in that direction.

Conservatives, such as Senator McCain, have, indeed, been among the most passionate supporters of the new Ukraine in the West, and should be recognized as such. However, Ukraine is too important to become a political project. Support for Ukraine, and opposition to Mr. Putin’s aggression there, should cross ideological and party lines, as it has in the U.S thus far.

Alexander Cooley, the incoming director of Columbia University’s Harriman Institute (who has written a few articles with me), expressed a similar concern, “Rather than getting on with the difficult internal process of reforming Ukrainian institutions, this move sends geopolitical signals that the Ukrainian government is thinking more about ideology, image and positioning in the eyes of certain western actors, rather than governance.” Mr. Cooley also cautioned, “Its the equivalent of waving a red cape to a Russian bull that’s about to start charging again.”

Mr. Saakashvili’s appointment will undoubtedly make his supporters in the West happy, but if those supporters really want what is best for Ukraine, they need to be honest about whether they think Odessa is best served by a governor from another country who was an effective fighter against corruption almost a decade ago, but who also limited freedoms, tolerated little dissent and made many significant mistakes of judgment during his presidency.

Lincoln MItchell is national political correspondent at the Observer. He has written extensively on Georgia and served as an informal advisor to the Georgian Dream coalition in 2012. Follow him on Twitter @LincolnMitchell. 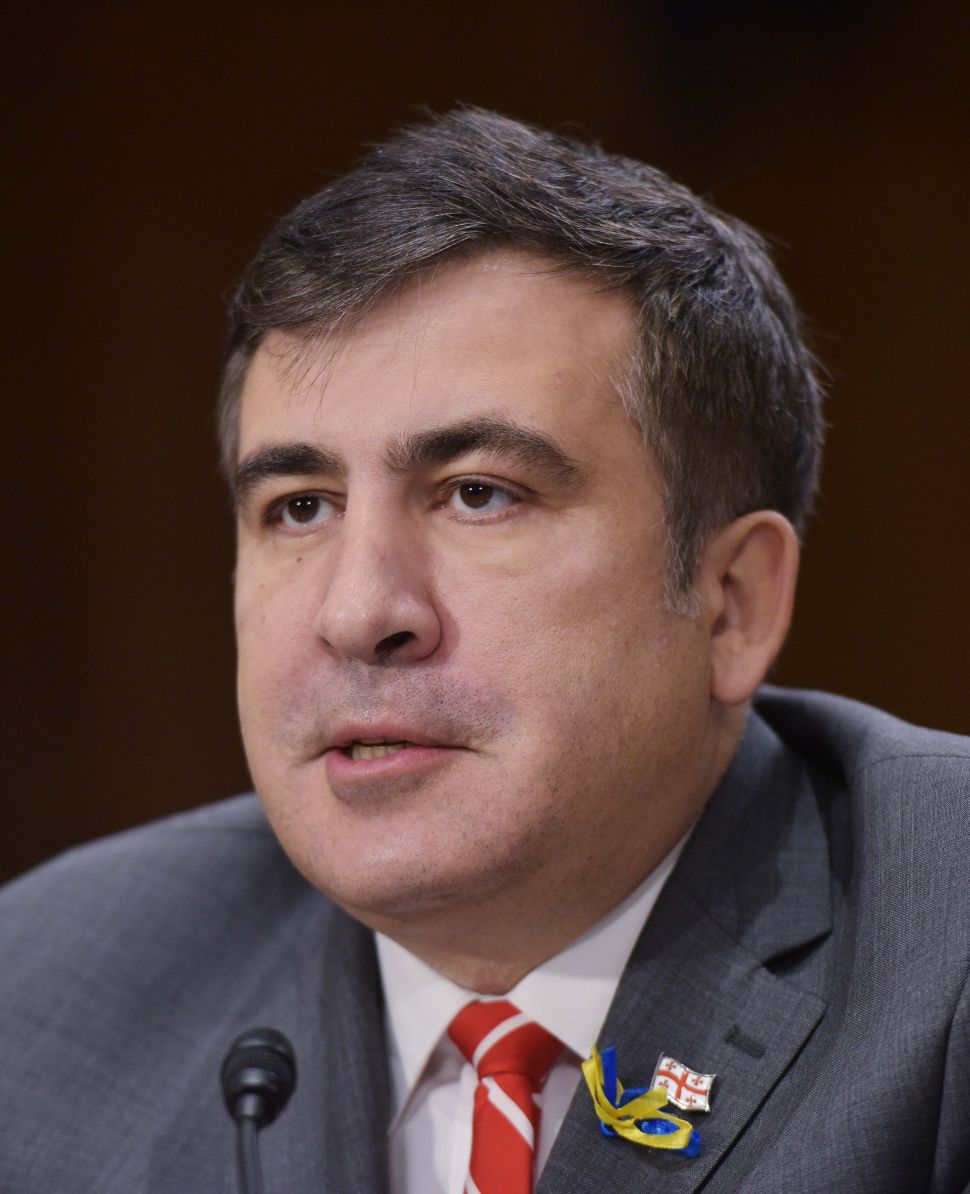