Attorney General Eric Schneiderman today attacked the final legislative package to come out of the state capital before the end of the 2015 session for not including any of the recommendations from his panoramic package of ethics reform proposals—and predicted improbably that there would be a special session of the State Legislature to deal with corruption.

Speaking after an unrelated press conference in his lower Manhattan headquarters, Mr. Schneiderman told the Observer he was in disbelief that Albany failed to take up any of the ideas outlined in his ambitious “End New York Corruption Now Act.” Despite a legislative session that saw Assembly Speaker Sheldon Silver and State Senate Majority Leader Dean Skelos step down from their perches amid federal charges of self-dealing and extortion, the last-minute bundle of new laws Mr. Cuomo finalized with their successors yesterday contained no new ethics legislation.

“I’m disappointed and, frankly, find it incomprehensible, that there were not further measures taken to reform the procedures in our state government an in our campaigns,” Mr. Schneiderman said. “There were no reform provisions to get money out of government and politics as a part of this package.”

The attorney general said that he assumed that a special session would be held to address corruption in the legislative off-season before next January.

“It’s clear the legislature and the governor will have to get back to work very soon to deal with these issues,” he said. “And that should certainly be on the table when they return for what I anticipate will be a special session in the near future.”

Mr. Schneiderman, himself a former state senator from Manhattan, toured the state last month pushing his bill, which would end outside income for lawmakers, end per diem compensations given to politicians to pay for accommodations in the capital, drastically lower campaign contribution limits for individuals and lobbyists, control the amount of cash limited liability corporations can donate to candidates and abolish the virtually unregulated party “housekeeping” accounts.

It would also expand the powers of the attorney general’s office to prosecute public corruption, create new criminal categories for undisclosed self-dealing and bribery, and change the pension forfeiture rule passed earlier this year to prevent state funds being used even to provide for a convicted official’s spouse or children.

In return, the proposal calls for altering the state constitution to extend terms from two years to four, establishing public financing of campaigns reminiscent of New York City’s matching funds system and increasing politician’s salaries to as much as $174,000 a year.

Mr. Cuomo accused Mr. Schneiderman last month of coming “late in the day” with his proposals, even though a number of the measures had long had the support of the Assembly and the State Senate Democratic minority. 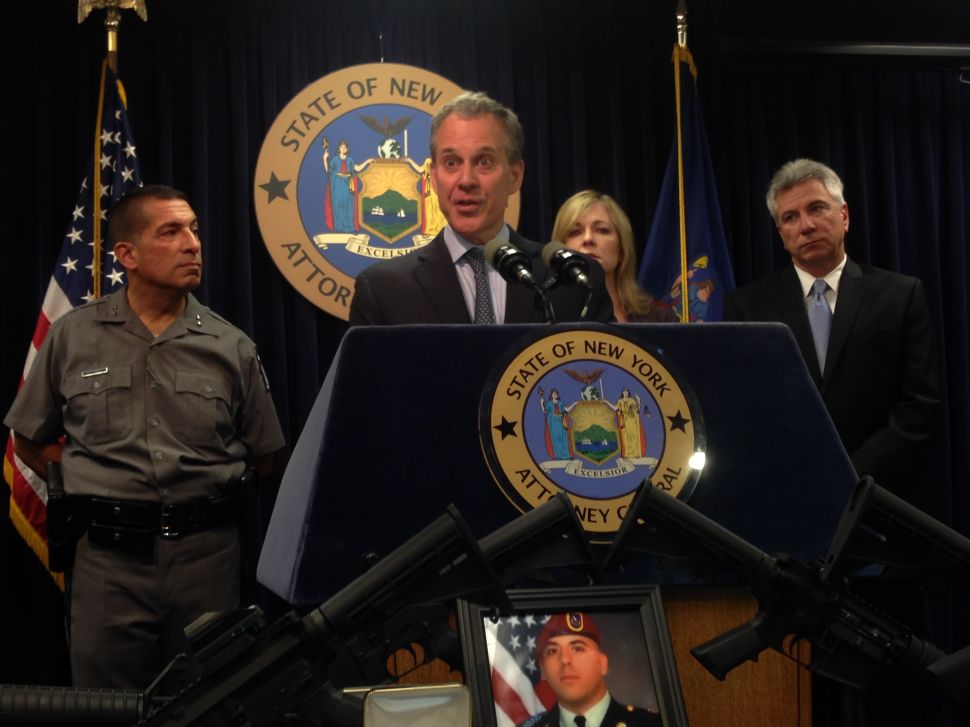