(Slight spoilers for MTV’s Scream. And also I guess the 1996 movie but come on don’t be that person)

MTV’s Scream, which makes its debut tonight at 10 p.m., feels like American Horror Story, if it was filmed on Glee’s set. Make no mistake, Scream aims to capitalize both on its namesake and the recent influx of horror television shows—it’s a soapy MTV teen drama masked (pun intended) as an homage to its scary predecessor.

Scream is marketed towards an audience born the year the 1996 movie was released, and not original fans of the film. Luckily, these kids grew up wearing Scream masks every Halloween, so both the image and name are familiar. However, the film itself probably feels far away and dated, something the writers appear to be painfully aware of. In a desperate attempt to make the show appeal to the ever–tricky millennial crowd, the pilot is chock–full of modern gadgets and ideas (viral Youtube videos! texting!), all of which distances the show from the movies, to the show’s detriment.

The pilot kicks off with the brutal murder of Nina (Bella Thorne). It may be the scariest scene, as well as the funniest—Nina can’t quite navigate her iPhone with fingers dripping from the jacuzzi, and Siri can’t quite get her 911 request right.

Before her death, Nina posts a video of Audrey (Bex Taylor–Klaus) making out with a girl in a car. The video instantly racks up hundreds of views on Youtube.

Once Nina is dead and the video goes viral, it becomes clear that the rest of the cast needs some serious help. The kids at Nina’s high school are either very, very poorly written, or just sociopaths. Nina’s closest friends (who were also present during the filming of Audrey’s make out session) really and truly do not care that she is dead. Brooke (Carlson Young), Will (Connor Weil), even Will’s perennially sweet and super boring girlfriend Emma (Willa Fitzgerlad) appear fairly indifferent to Nina’s demise.

The high schoolers on the show are just nasty, they all feel like shadows of people. When Audrey enters Brooke’s party (which is supposed to be a wake for Nina, but is really just a drunken blowout—I’m telling you, these kids are terrible), the room falls silent. Realistically, the most attention Audrey would have received is a drunken fellow party–goer approaching her, clapping her on the back, slurring, “#Lovewins man,” and then leaving.

I also have a quick bone to pick with the casting of these high schoolers. I graduated high school about a year ago, and get really excited when I pass for anything more mature than a 15 year old. The kids who attended my high school didn’t have broad shoulders or finely trimmed facial hair or crows feet. They had scrawny shoulders and a single whisker and skin as red and irritated as my face after watching this show. Ghostface, I’m with you. Everyone in this town is way too good looking, and someone needed to do something about it. I’m not saying murder was the only route to take, but it was certainly a viable option.

Everyone is fairly insufferable, except for Noah (John Karna), the fast talking cinema nerd with a penchant for slasher theories. Noah is fairly likable; Mr. Karna delivers the typical self–reflexive Scream monologues with a sarcastic drawl. He’s also on the shortlist to intern for Elon Musk. That wasn’t an elaborate typo, and I didn’t just have a stroke on my keyboard. This high schooler is on the shortlist to intern for Elon Musk. MTV, I know you are making what you think is a clever television show, but your viewers do not know who Elon Musk is. Also, Noah is in high school. If all you have to do to get an Elon Musk internship is analyze horror theories, then me and everyone at tvDownload—and basically everyone on the internet—will wait patiently for our jobs.

You know what, I’m going to admit it. I got pretty scared watching this. I’m also going to admit that I had nightmares for two weeks after reading the Babadook Wikipedia description. Not seeing the movie. Just reading the plot summary.

But this show does what it is designed to do. It gives you cheap thrills, introduces some very attractive characters, and makes you wonder who exactly is killing all of these nice (read: really, really mean) teenagers. Is it Noah? Maybe it’s Audrey. Or perhaps its Kieran (Amadeus Serafini), the new kid with impeccable facial hair and a troubled past. After Emma discovers Will’s affair with Nina (he uses the excuse “we were on a break!” which I’m sure he got from watching that Friends episode live because he is actually 34 years old), she disregards both Kieran’s facial hair and troubled past to engage in an obligatory MTV make out session in the greenhouse. (It’s like they’re trying to get killed, this sounds like something right out of the board game “Clue:” Kieran stabs Emma to death with his perfectly groomed whiskers in the greenhouse!)

And, to be fair, there are slivers of hope in the pilot. It’s not boring, and the writers make a genuine attempt at remaining true to Scream’s self–deprecating humor. And from a logistical standpoint, a television show is a smart medium. We wonder who the killer is for a season, maybe even for two. If you catch him, no problem! People have proved they’re nothing if not willing to step in Ghostface’s shoes.

So take a peek, watch the pilot, and pray with me that Elon Musk makes a cameo. 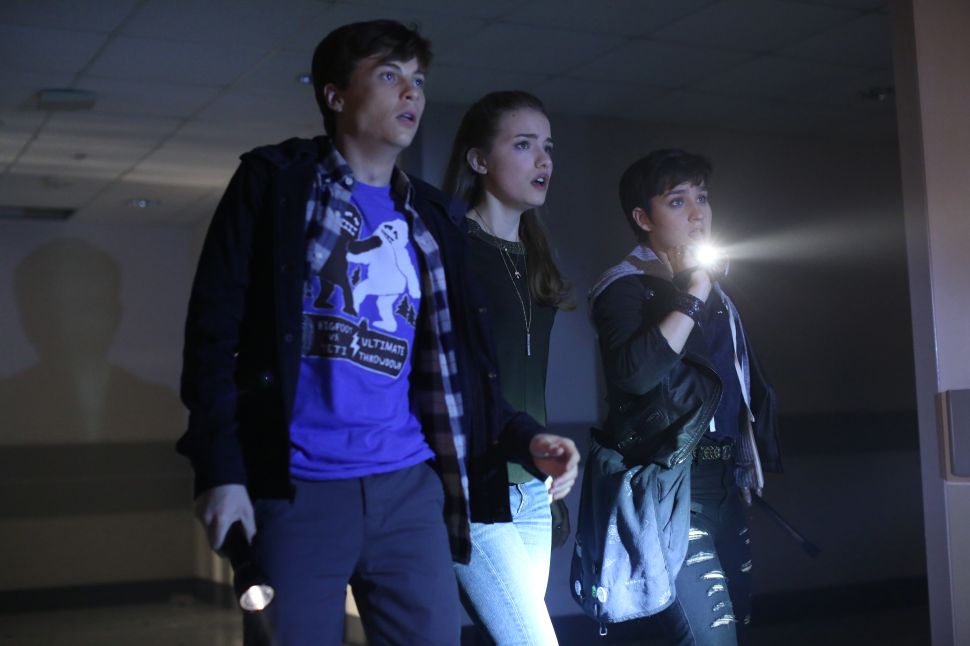