As a member of multiple noise bands out of Providence, I’m often asked why the music that comes out of the city is so “fucked up” (their term, not mine). I usually laugh it off and make an awkward joke. But after hearing this question hundreds of times in my 20 years of touring it has forced me to contemplate the matter. What does drive the bands of Providence?

‘Imagine swimming mindlessly in the late afternoon sun when out of nowhere a huge, horrifying creature, roughly 15 feet long, rocks your world.’

I don’t pretend to have an answer, nor do I even have the right to explain the artistic inclination of Providence artists. But I would like to offer a peek into the local culture that has inspired my work. Our point of entry: A local news story featuring a couple from Fall River, Mass., who claimed to have been attacked by a sea creature at a Rhode Island beach. The segment, which appeared on Channel 12’s Eyewitness News, begins with newscaster Sean Daly addressing the public: “Imagine swimming mindlessly in the late afternoon sun when out of nowhere a huge, horrifying creature, roughly 15 feet long, rocks your world.”

The piece continues with an emotional interview with the couple who is sobbing and painfully recalling the horrid details of the encounter. Even a few days or weeks after the initial attack, Rachel Carney, who stars as “the swimmer,” is still distraught. It is mentioned in the interview that she is seeking counseling.

The journalist then turns to Dennis Vasconcellos, Rachel’s fiancé, who ultimately rescues her from the unknown threat. He details his heroics: “It’s gonna’ get her—I grabbed her by the ass … or … rear end and I grabbed her like that and whipped her in over her head…” Vasconcellos, without fear for his own life, rips Rachel out from the jaws of the sea creature and describes it in great detail: “It’s gigantic, O.K. It has scales on it and stuff … it’s big head comes up … it’s like a basketball, it’s like this big, O.K. … it’s got these fangs like my fingers, this many at the bottom and about two or three at the top plus layers inside, O.K.”

Why was there a sea creature in the ocean off the coast of Rhode Island? Well, the journalist provides a plausible explanation: “The group thinks the creature was attracted to blood from a nasty injury to Joey Mailloux’s leg.” Joey is a friend of Rachel and Dennis’ who can be seen in the segment rubbing the gross cut in the ocean. 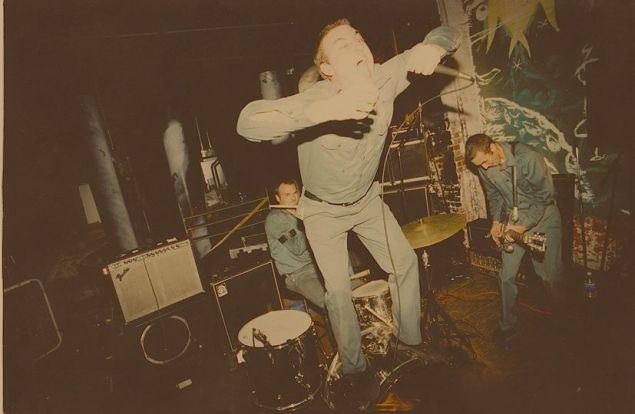 I’ve often thought of playing this news segment to people when asked about the uniqueness of Providence bands. I think it eloquently demystifies the environment where the art is created. The news piece is a perfect snapshot of a very distinct culture. The cigarette dangling out of Dennis’ mouth, his creepy moustache, earing in only one ear and Roman Catholic-looking cross around his neck and Rachel’s similarly raspy non-rhotic accent and gold jewelry make the heroes of this news story basically interchangeable with any of my own aunts and uncles.

I grew up in an atmosphere of hard drinking, hard cigarette smoking and hard working New Englanders. My family and their friends were all angry, anxious and beautiful. They struggled with money, depression and substance abuse but none of it was recognized as a problem—it was just living. Now, I don’t know for a fact that Dennis, Rachel and Joey struggle with any of these issues, but I do know that I felt like my 5-year-old self at a clam bake when I watched this video.

Although I may have felt confused and frightened—it always felt like home.

I remember the adults were always blackout drunk, overeating, playing horseshoes or volley ball and arguing. In fact, most summertime gatherings in my family ended in fistfights. There was a recklessness to the adults who were meant to care for me and although I may have felt confused and frightened—it always felt like home. The music I’ve helped to create is very similar—at its root it is angry, careless and chaotic but the end product always made perfect sense considering where it began.

The other members of the bands I’ve played in have all recounted very similar childhood experiences. We all share this New England way of being and we refuse to be anything but. Like most New Englanders we are stubborn. Despite the fact that in the past 20 years new industries have moved in to Rhode Island, the economy still relies heavily on manufacturing jewelry, electrical equipment and silverware—industries that have been largely forgotten in most American cities.

For me, there is a timeless quality to where we live. There are certain fashions, pastimes and technologies that never disappear. The state offices still use typewriters and dot matrix printers and every year at the East Providence Heritage Festival cover bands like Almost Queen, Riders On The Storm and Kisstory rock out by the heavily polluted Narragansett Bay. I adore it. I am deeply inspired by this odd sense of arrested development. Rachel, Dennis and Joey are in some ways the human form of any given Arab On Radar song.

Another intriguing angle to this story is the pure showmanship demonstrated by Rachel and Dennis. Whether or not there was even a sea creature or anything at all beyond the “danger” sign, when the cameras began rolling the two of them turned it on. Personally, I’ve always tried to bring more to the stage than just the songs I’ve helped write. I’ve always embraced the idea that the performance is more important than the execution of the material. I could only dream of being as captivating as Dennis in his retelling of the struggle with the sea creature. After watching this piece over and over—I began to consider that maybe Rachel and Dennis are making fun of us? Perhaps I’m not the one who should be laughing. Maybe this is this their version of a group of bored 20-somethings faking a lawsuit to get on Judge Judy. Or maybe the both of them truly believe the attack occurred. Either way, their theatrics are brilliant.

Their showmanship brings to mind another similarly odd and daring performance that took place on July 27, 1997, at The Met Café by Dan St. Jacques, the wild lead singer of the band Landed. Like Arab On Radar, Lightning Bolt and Black Dice they were a band to emerge from the Fort Thunder scene. Fort Thunder—a DIY space at the center of Providence’s flourishing art and music scene in the late ’90s—suffered a similar fate as so many cultural epicenters when its building was purchased by a shitty corporation and demolished in 2001, damaging an important art and music scene.

Among all the ways that Landed was unique, I always enjoyed most that their lineup was constantly changing around the founding members: St. Jacques, Joel Kyack and Shawn Greenlee. Some of the more notable musicians to join them were: J. Ryan and Rick Pelletier (Six Finger Satellite), John Dwyer (Pink and Brown, Coachwhips, and Thee Oh Sees), and occasionally Steve Mattos (Arab On Radar and Doomsday Student).

As much as I love those early Landed albums and fondly reminisce about their outrageous live shows, it is Dan’s impact on the Providence music scene that I admire the most.

I am deeply inspired by this odd sense of arrested development.

On this night, Landed were playing with Drop Dead, Men’s Recovery Project and Forcefield. In preparation for his performance, Dan soaked his shirt in rubbing alcohol, put it on, lit it on fire and walked out to perform. The stunt was even rehearsed the night before without incident. He had initially thought the flames would burn out as the alcohol dissipated and he would continue with the set. His aim was to have one of the wildest stage entrances in Providence history. However, on the night of the show, Dan added too much alcohol and within seconds he was engulfed in flames, running around the audience. He ended up having to be brought to the hospital and experienced third-degree burns on most of his upper body. There is an engaging interview with Landed conducted by Matt Korvette over at Yellow Green Red that recalls the incident more detail.

I recently asked Dan about this event: “I was definitely thinking about the visual impact and performance aspect of a person of fire … something I would have liked to have seen if I was a member of an audience.” Similar to the sea creature news segment, Dan later sold the footage of the event to a television show called Real TV. He claimed the performance was part of a Satanic ceremony. “We got like $8,000 for it!” he laughs. I asked him if he regrets the performance, he responded with a steadfast “I did not regret it then and still don’t today.”

Now for a moment let’s forget about the stars of the Rhode Island Sea Creature news segment and their outlandish story and consider the news station Channel 12. Think about all the steps they had to go through to air this segment. The story would first have to be pitched, discussed and approved in a production meeting. Copy for the segment would have to be written and all the footage would have to be shot and edited. The whole process may taken hours. To have this story taken seriously enough to make it to television at all might be the most inspirational aspect of the whole event. Like Providence. A history written in the moment, swimming with monsters, walking in the fire, just for the hell of it.

Eric Paul is a writer, artist and vocalist who has performed with groups like Arab on Radar, and The Chinese Stars, he currently sings in the noise band Doomsday Student. You can find more of his work on his website: Iofferedmyselfasthesea.com 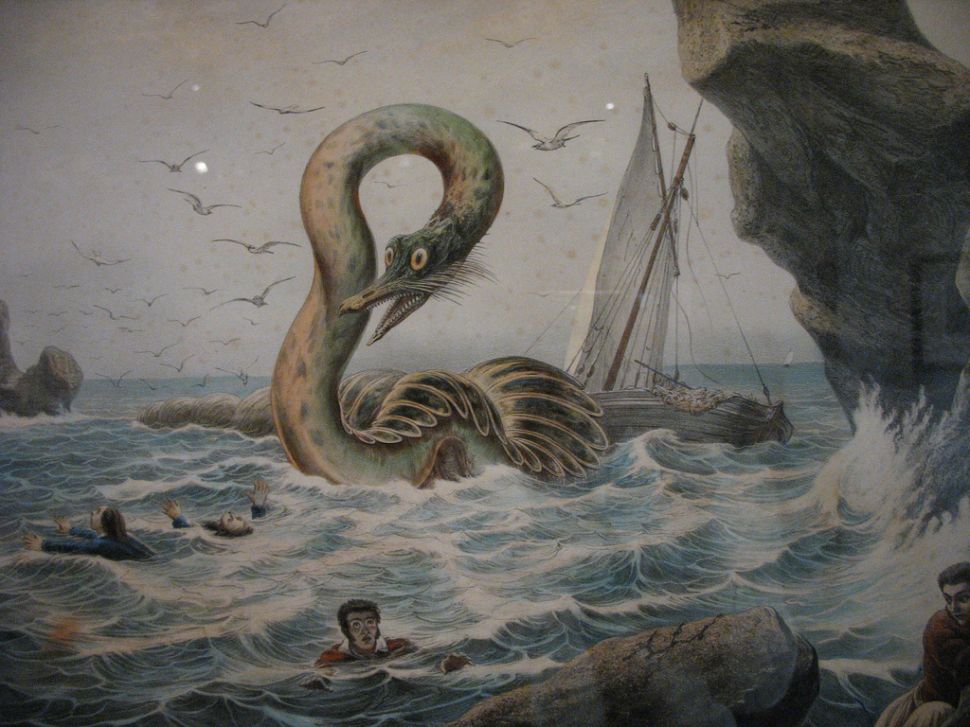