It would be futile to try to recap the first episode of Sense8, the science fiction mind-blower from Andrew and Lana Wachowski and Babylon 5 creator J. Michael Straczynski. All twelve episodes of the series are currently streaming on Netflix, but my assignment is to write about the pilot, and since it’s impossible to know what the hell is going on after just one short hour of this thing, I will simply say this: Sense8 is exactly the show you’d expect to be written and directed by a group of philosophical space wizards.

The terrible title refers to a group of eight strangers around the globe who suddenly form a powerful mental link. There’s a Mexican telenovela actor, a Korean businesswoman, a Kenyan entrepreneur trying to run a bus service, and a trans activist in San Francisco, just to name fifty percent of them. Riley the club DJ, a German safecracker and an Indian bride-to-be round out the gang, along with a Chicago police officer named Will, who, because this show is directed by the Wachowskis, can’t even wash his face without it being accompanied by a pounding techno beat. None of these people have ever met, but they experience sensations and hallucinations from each other’s lives, and in some cases, are able to communicate directly with one another. Why these people are linked and why some Bad Dudes might be after them, however…well, those are questions better left for the show’s remaining eleven hours.

Before we meet these mental weirdos, we’re first introduced to Angelica, who writhes in pain on a dirty mattress amidst the rubble of an abandoned church. She’s visited by a vision of Jonas, played by Naveen Andrews, best known as Sayid from Lost. But rather than pull the woman’s fingernails out with pliers, the way a good Iraqi Republican Guard member might, Jonas bravely joins her on that disgusting mattress as Angelica projects herself into the lives of the aforementioned eight strangers. They all react predictably to the sudden appearance of a sweaty, backlit Daryl Hannah; namely, by staring dumbfoundedly into space. (Frankly, I was a little disappointed nobody blurted out “BOCCE BALLS!” like the tour guide from Splash.) Jonas vows to protect this oddball octet, Angelica puts a gun in her mouth, and I hope that satisfies you in terms of story because that’s all we’re going to get in this first hour.

The rest of the pilot is spent pinballing around the globe, meeting each of the…well, I guess we’re calling them “sensates.” I wish I could tell you more about what’s going on here, but there’s not a whole lot to sink one’s teeth into. With so much ground to cover, it’s inevitable that a few of the characters wind up feeling flat, or worse, clichéd. (Anybody want to guess if the young Mumbai woman with the university degree actually loves the man her family has promised her to?) We don’t really know anything about anyone yet, and again, because this is the Wachowskis, a lot of that potential expository time is taken up with characters rhapsodizing about “the language of pure emotion” or the thematic intentions of their Pride Day performance art piece.

Which is not to say that this is boring at all. Slow and dense, maybe, but it’s definitely fascinating. The show looks awesome, and each far-flung location is gorgeous and distinct. These characters could not further away from each other both physically and culturally, and the ways in which their wires cross make for some of the pilot’s most compelling moments. A chicken received in payment by the African bus driver suddenly flutters on to a desk in a Seoul office. The Berlin thief is distracted mid-heist by the wailing of a police siren in Chicago. A face appears reflected in a car window thousands of miles away. The episode ends with Will and Riley finding themselves face to face in the Church of the Filthy Mattress, as they discover their mutual connection to Angelica.

The pilot doesn’t end on a cliffhanger so much as it just ends, right after the characters have barely been introduced. Sense8 could be as weird and cool and infuriating and exciting as fans are hoping for, but it’s gonna take time. This is a show for people who thought Cloud Atlas was a little too zippy. 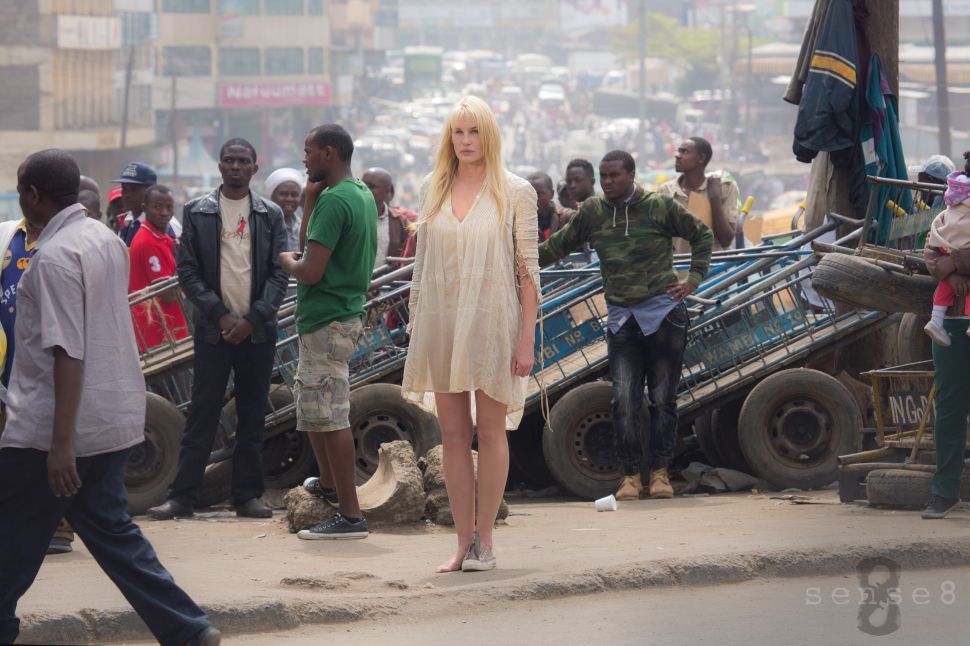