Man, I was really digging this show until they decided to drop in a 10-minute-long montage set to “What’s Up?” by 4 Non Blondes.

Okay, so it was redeemed somewhat by having a character comment (in a narratively appropriate context, I might add) that the song is the “perfect soundtrack for a lobotomy.” It’s just unfortunate that the montage arrives in the final moments of episode 4—too-cutely entitled “What’s Going On?”—putting a bit of a sour note on what has otherwise been a gorgeous, strange and compelling series in the early going.

The Wachowskis have always been interested in gender and identity, so it’s no surprise that trans activist Nomi is front and center in these episodes. Whooping it up on the back of a motorcycle during San Francisco’s Pride Parade, Nomi spots Jonas in the crowd and faints, landing her in the hospital. Oh, Nomi, I love that you are living out and proud, but that doesn’t mean you don’t have to wear a helmet. Stuck in a hospital bed, Nomi is tended to by her cartoonishly transphobic mother. (Terrible parents are another primary theme of Sense8. Everyone seems to have been irrevocably damaged by mom or dad in some way.) Brain scans show that the two hemispheres of Nomi’s brain are knitting themselves together, and Evil Mom and Evil Doctor #1 are conspiring to slice her gray matter to pieces against her will. Almost immediately, Nomi is strapped to a gurney and being prepped for invasive brain surgery while under heavy security. Sure, it’s terrifying, but hey, some people wait for hours in the emergency room before a doctor will even look at them, so at least be glad someone is paying attention to you. Thanks, Obamacare.

Meanwhile, the Department of Homeland Security has identified Jonas as a terrorist, so it’s a bit of a shock when he sneaks up behind Will in the energy drink section of a local 7-11. Why Jonas needs to be physically present in Chicago when he can apparently bop around between consciousnesses is unclear, but it does lead to an awesome bit in which Jonas teleports himself and Will between their two cars while in the middle of a high-speed chase. Nomi’s in trouble, he says, and Will is the only one who can help bust her out of the hospital. Hey, Jonas, no offense, but maybe Nomi wouldn’t be in the hospital if you hadn’t SCARED THE BEJEEZUS OUT OF HER WHILE SHE WAS RIDING A MOTORCYCLE.

Will and Nomi have the most direct mental link so far, but intrigue is brewing around the globe for our other little freaks. Marginalized by her father for having ladyparts, Sun discovers her brother has been embezzling from the family business. She rats him out, but suggests that if she takes the fall for her brother’s crimes, it would spare her father the dishonor of having put a juvenile fuckup in charge of the company. It’s not clear what Sun’s long game is yet, only that she’s breaking out of her role as the obedient daughter. Until now, that’s something she’s only been able to do during her nightly routine of beating the crap out of guys at an underground fight club. Sun’s bloodlust works out for Capheus when he ill-advisedly chases down some thugs who have ripped off the AIDS drugs he purchased for his mother. Lucky for him, Sun is mid-match at the moment, and Capheus is able to channel her skills to become a one-man ass-kicking machine. It’s a stunning set piece. Sun blinks between both fights as the camera rapidly cuts between the soft earth tones of a Kenyan village and the Wachowski-riffic, neon-soaked kickboxing arena. Is Capheus hallucinating? Is Sun somehow in two places at once? It doesn’t matter – the sensates operate as a Borg-like combo platter of personalities. “You are no longer just you,” Jonas tells Will later, blowing his mind while ignoring the larger implications for masturbation.

Not all the sensates’ storylines are quite so interesting. Turns out Lito, the Mexican soap opera star, has been spurning the advances of his hot female co-stars because he is actually living with his hot gourmet chef boyfriend. Eventually, his hot, publicist-arranged beard catches wise, but instead of getting angry, she moves in with them as a way to both avoid her gangster ex-boyfriend and fulfill her weird sexual fantasies. The whole farce turns into a gay comedy of manners that feels tonally out of place. (In fact, other than the aforementioned montage, I can’t think of an single instance of Lito “sharing” with his cohorts, so perhaps there are other things in store for him?) DJ Riley has also been relegated to the background these past few episodes, which is a bit odd considering the pilot ends with her caught in the middle of a drug-fueled murder scene, but I guess DJs are just chill like that.

When Sense8 works, though, it really works. Initially, I thought the hallucinations and consciousness swapping might feel like a gimmick with diminishing returns, but the mental crossovers are thrilling every single time. The Capheus/Sun kickboxing moment is one of the more elaborate sequences, but even the smaller moments are pretty damn cool. Will’s stroll through a prison hallway is matched with Sun as she stalks her brother in a Korean hostess club. Kala’s sleep is repeatedly disturbed by Wolfgang having noisy sex, until the two come face-to-face (while thousands of miles away, of course) at a Berlin karaoke bar. In the fourth episode’s climax, Will dozes on his couch while Nomi is being prepped for surgery. He looks down to see her restraints on his wrists, and then suddenly Will is Nomi, unlocking his/her handcuffs and making his/her way out of the hospital with the combined power of a cop’s instincts and a scared woman’s determination to survive.

Scattered throughout the individual storylines are hints of something larger afoot. Homeland Security’s interest in Jonas is part of some kind of government conspiracy, natch. And Nomi’s neurosurgeon is obviously interested in her as more than just another patient—he might as well be wringing his hands and cackling like a mad scientist. Jonas tells Will he’s part of a “cluster” of sensates who were “reborn” through the now-dead Angelica, but any information about why they were chosen and who is trying to stop them remains maddeningly out of reach.

And then there’s that “What’s Up?” montage. Boy, is it silly. But it’s also the first experience that all eight of our sensates have shared. The characters worlds’ collide as they invade each other’s personal space, but this time the hallucinations aren’t scary and confusing. Instead, the sensates all sing to each other with a joy that not even an awful, awful song can temper. So, fine, Sense8. You are really cool so far, and I will give you a pass on this one. I’m fine with believing in a group of mind-swapping empaths who are all wrapped up in a global conspiracy involving multiple governments and billion-dollar multinational corporations. It just seems less plausible there are eight people out there who actually like that song. 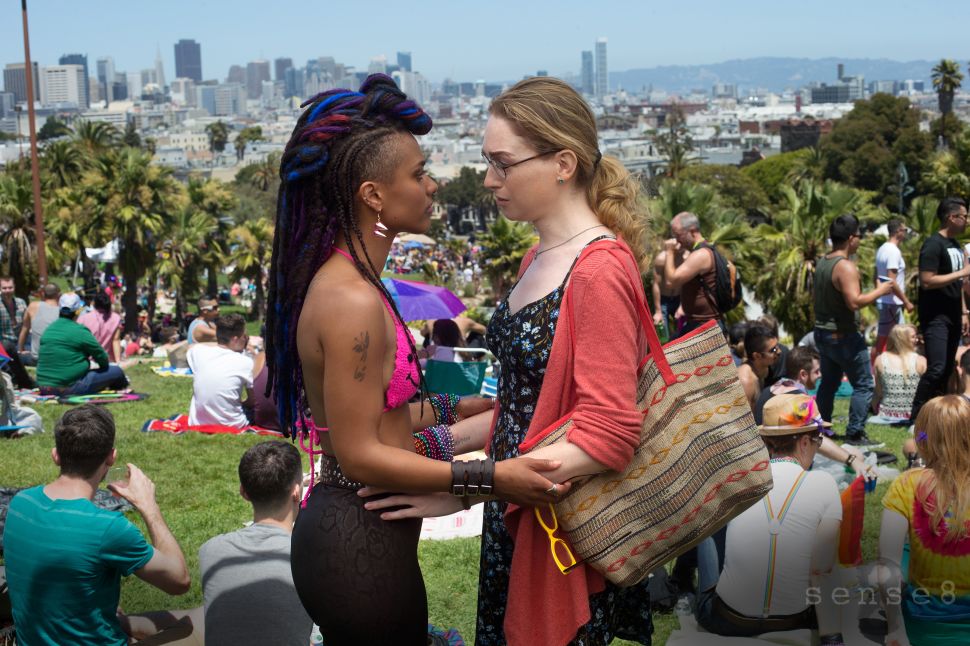