In case you thought Sense8 was thematically subtle, this trio of episodes ends with an installment called “What Is Human?” It’s the question Jonas puts to Will during a mid-episode info dump that digs a little deeper into the show’s mythology. According to Jonas, the sensates are a different species of human that represent an evolutionary branch off their non-mind-melding brethren. (I say “according to,” because it’s still not quite clear which side Jonas is on.) To Jonas, normals like you and me are disconnected from each other and the world around us, and that lack of empathy is what allowed us — or rather, “them” as Jonas sees it — to become a race of psychopathic warmongers. “Killing is easy when you feel nothing,” he tells Will.

Naturally, “they” are scared of a few superior brains, which is why the sensates are being hunted to extinction. The bad guys work under the banner of the Biologic Preservation Organization, and what little we know about them is thanks to Will and Nomi, whose combined cop/hacker powers make them a sort of transexual, schizophrenic Chloe O’Brian. Just as they’re cracking the case, they’re interrupted mid-visitation by the arrival of the shady Dr. Matheson, who just happens to be in the neighborhood of Amanita’s adoptive mother’s house, where Nomi and Amanita are hiding out. Matheson is also known as “Whispers,” which makes him sound less like a Big Bad and more like my sister’s cat. With the BPO closing in, Sense8 turns even the most familiar of suspense setups (“You go! I’ll cause a distraction!”) into authentic character moments, with Amanita staging a tampon emergency so Nomi can slip away.

The rest of the cluster (and every time I write that word it makes me think of boxed candy purchased from Walgreens) isn’t yet aware that they’re being hunted down, but that doesn’t mean they don’t have their own problems to deal with. Lito’s story in particular proves that Sense8 has always been one step ahead of us. What started out as an silly menage a trois romantic comedy takes a dark turn when Daniella returns to the abusive Joaquin in order to protect Lito from blackmail. Hernando, disappointed that Lito seems cool with this arrangement, breaks up with him on set (cold, bro!), sending Lito into a depressive tailspin during which he leaves endless messages on Hernando’s voicemail and drinks entire pitchers of margaritas directly out of the blender. This leads to one of Sense8’s most entertaining and unexpected sharing sequences yet: the unlikely pairing of Wolfgang and Lito. Wolfie, caught at gunpoint in a double-cross gone wrong, is visited by Lito, who analyzes the situation with an actor’s eye, literally stepping into Wolfgang’s place like an understudy to play out the scene. Even in a tense, action-movie moment like this, the Wachowskis’ focus on gender and sexuality remain front and center; the story Lito concocts to buy Wolfgang some time involves Felix playing gay to seduce another man into giving up the combination to his safe. Newly inspired and back in his own body, Lito charges over to Joaquin’s in full telenovela mode to demand Dani’s return. But while Lito may be a talented actor, he’s not that talented a fighter, and he nearly gets killed by Joaquin, who in addition to being a terrible person is also apparently a Thai martial arts master. Luckily, Wolfgang steps into Lito’s shoes to beat the crap out of Joaquin, and Lito, Hernando and Dani all meet up in a tearful reunion of apologies, declarations of love and promises of future weird sexual shenanigans.

It’s a totally satisfying arc for Lito, whose sensate powers have thus far been underused. I’m excited to see how the cluster will incorporate this new energy as the show ramps up to the finale, considering the other sensates are also at major turning points in the home stretch: Kala, who’s still got Wolfie’s impressive third leg on her mind, is torn between going through with her wedding or honoring her late father-in-law-to-be’s last wish, which is that she stay as far away from his son as possible. Sun is shocked to learn that her father is willing to come clean about her family’s dirty dealings, which would spring her from prison but leave her brother locked up for several thousand life sentences. And Capheus, who we last left in an impossible position between two powerful crime lords, is chilling on the couch, boosting his courage with a Jean-Claude Van Damme film festival.

Servicing eight different storylines while exploring the central conceit of the show and unpacking the larger conspiracy is a monumental task, but it’s easy to overlook the stop-and-go plotting when the quieter character moments are so beautifully rendered. Will and Riley have started dropping in on each other just to say hi, leading to a lovely scene in which Riley shows Will around her childhood home. The tour culminates in a kiss, and it’s amazing how intimate it is considering these characters have rarely shared the screen and have never actually been in the same location.

But nothing compares to the sequence that ends “What Is Human?”, not even the super-hot, multi-orgasmic orgy scene from a few episodes ago. Riley attends a concert performance given by her pianist father, which of course is attended by all the other sensates, and the music so moves them that they all simultaneously experience their own births (which, according to the show, all happened at exactly the same time). It’s a gorgeous sequence, cutting from the sensates in the concert hall to slow-motion flashbacks of the moment each of them entered this world. Will is delivered into his father’s hands in the back of a squad car. Lito’s family is gathered around a telenovela, barely paying attention to the bellowing woman birthing a child in the middle of the room. It’s stunning and funny and touching and not a little bit graphic, happy to depict newborn babies crowning or being removed from C-sections without being the slightest bit grotesque or winking about it. I dunno, you guys, I am not often so deeply moved by a manipulative montage, but the Wachowskis are doing a pretty good job of pushing my buttons. If Sense8 is about what it’s like to have the feels all the time, this show has me convinced I’m a pretty advanced human being. 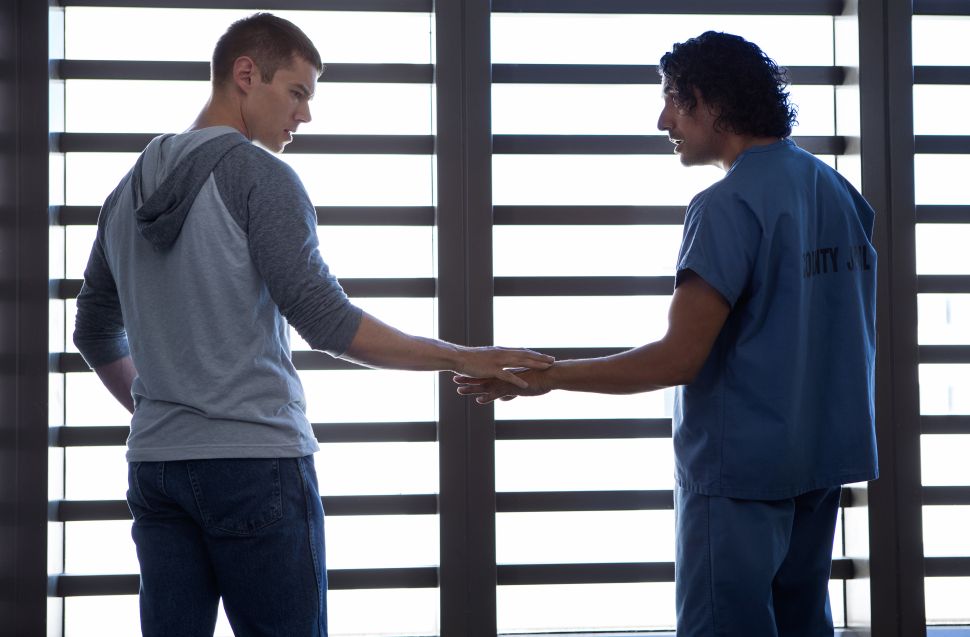