As national debate rages about the Confederate flag, a peculiar installation of that controversial banner may be hiding in plain sight – inside the cushion of Abraham Lincoln’s rocking chair, a replica that rests in a balcony box in the re-built Ford’s Theatre in Washington, D.C.

The theatre—a functioning play space and a museum—reopened in 1968, 103 years after President Lincoln died by gunfire in April of 1865 at the end of the Civil War while he watched a play there.

The builder of the replica chair—a now-deceased craftsman named Carlton McLendon—lived in Montgomery, Ala. and felt bitter toward the Union because two of his Confederate ancestors died in the four-year conflict.

Ford’s Theatre – a popular and compelling tourist attraction run by the National Park Service – is not aware of the legend of the Confederate flag in Lincoln’s chair.

Initially, McLendon resisted several requests by the Department of the Interior to build the chair but eventually relented and added a sly bit of unofficial interior decorating.

He included the Confederate flag, the very same banner that is currently under figurative fire since a white racist massacred nine black churchgoers with a gun two weeks ago in Charlston, S.C.

The Charleston killer – Dylann Storm Roof – posted internet photographs showing him gripping the Confederate flag and burning the American flag. Since the mass killing, governments of several former Confederate states have removed the symbol from some state property.

However, South Carolina – the flash point of the Civil War — is merely considering its removal from state capitol grounds. A black woman pulled it down from its flag pole Saturday before authorities apprehended her and hoisted it back up. Other Confederate flags were burned in public over the weekend in New Orleans and Chicago.

Defenders of the banner – technically the battle flag of General Robert E. Lee’s Army of Northern Virginia – say it represents Dixo-American cultural heritage and pride and that it honors the memory of the valiant rebel warriors who bravely fought and died to secede from the United States from 1861 through 1865 while protecting their “states’ rights” to own slaves.

Critics say the red, white and blue flag with a bold “X” cross is the American swastika and represents both human slavery of African-Americans until the mid-19th Century and murderous opposition to the Civil Rights movement of the mid-20th Century.

The furniture craftsman – McLendon, who died in 2004 at age 92 – told employee Richard Kuehndorf and others privately that he put the Confederate flag in Lincoln’s chair as “the last shot of the Civil War.”

“He definitely did it,” Mr. Kuehndorf said by telephone from Atlanta last week. “He was definitely proud of his Southern heritage.”

Although McLendon discussed his sly flag planting frequently with those he trusted, he never would confirm it in public to people he didn’t know, Mr. Kuehndorf said.

If McLendon was so proud of his flag, why not go public?

Ford’s Theatre – a popular and compelling tourist attraction run by the National Park Service – is not aware of the legend of the Confederate flag in Lincoln’s chair.

In an email, Public Affairs Officer Mike Litterst wrote: “While the National Park Service can confirm that the reproduction of the chair Abraham Lincoln was assassinated in at Ford’s Theatre was produced by Carlton McLendon, we are unaware of the claim that a Confederate flag was sewn into the seat cushion at the time of its manufacture and have no evidence to suggest this is true.”

“Our curator checked the files on the Lincoln rocking chair this morning and found no reference to a Confederate flag having been discovered within, despite our belief that it has been reupholstered at least once since 1967.”

The real Lincoln death chair sits at the Henry Ford Museum in Dearborn, Mich., just west of Detroit. Auto pioneer Henry Ford bought it (through an agent) at auction in New York in 1929 for his new museum.

Although there is a deep, dark stain in the upholstery at the top of the chair, it is not the blood of Lincoln, as was once thought. Rather, it is an accumulated residue of hair tonic left by ushers who used the chair to take breaks during plays before that infamous Good Friday night.

Coincidentally, Lincoln’s real death chair rests near the Lincoln Continental limousine of President John F. Kennedy, who was shot to death in Dallas on Nov. 22, 1963. Curiously, the Kennedy car was ordered rebuilt and dismantled less than a month after his murder and was brought back into Presidential service in 1964. Jimmy Carter was the last Chief Executive to ride in the limo.

Thus, while Lincoln’s chair looks essentially as it did since the night he died, Kennedy’s car only vaguely resembles the vehicle in which he died. The Ford Motor Company, technically the limo’s owner, donated it to the museum after it was taken out of government service.

There is no family or business relationship between Ford’s Theatre and the Henry Ford museum or the auto company pertaining to the Lincoln chairs, although both are made of walnut.

As the theatre was being restored in the mid-1960s in D.C., the Henry Ford museum in Dearborn refused to let the government measure or otherwise use the original chair to build a replica.

So McLendon worked off photographs taken right after the assassination by Mathew Brady, who is celebrated for his haunting battlefield images from that war.

When the rebuilt theatre reopened in 1968—shortly before the assassination of Dr. Martin Luther King—McLendon told Nancy Barnhouse of the Cleveland Plain Dealer that he also found a chair just like Lincoln’s among family furniture pieces and that he used it as a model.

“At first, I had a feeling I was commemorating a murder,” McLendon told the Plain Dealer in 1968. “I had an eerie, gruesome feeling about it.”

But he said his feelings changed when he saw the chair in the context of the theatre where Lincoln sat above the stage on the right side as actor and Confederate sympathizer John Wilkes Booth took aim with a derringer.

“It is just as pretty as anything I’ve ever seen,” McLendon said of the restored theatre.

Of course, it is impossible to know if the McLendon/Confederate flag legend is true without an X-Ray of the Lincoln chair replica or maybe a temporary deconstruction of part of it. And, a skeptic should point out, it all could turn out to be like another look at Al Capone’s vault, a legendary Geraldo Rivera TV special that revealed nothing.

But the legend of the Confederate flag in the Lincoln chair has circulated among Civil War buffs, who are legion.

On the web site “Civil War Talk,” the story appeared in September of 2012 under the headline “Some people just got to get the last jab in.”

The posting drew several comments including one from “unionblue” who wrote: “What’s that line in the movie, ‘Cowboys,’ with John Wayne? ‘If it ain’t true, it oughta be.”

Joe Lapointe worked for 20 years as a sports reporter for the New York Times. He and co-producer Scott Newell are working on a video documentary called Lincoln’s Chair and Kennedy’s Car. 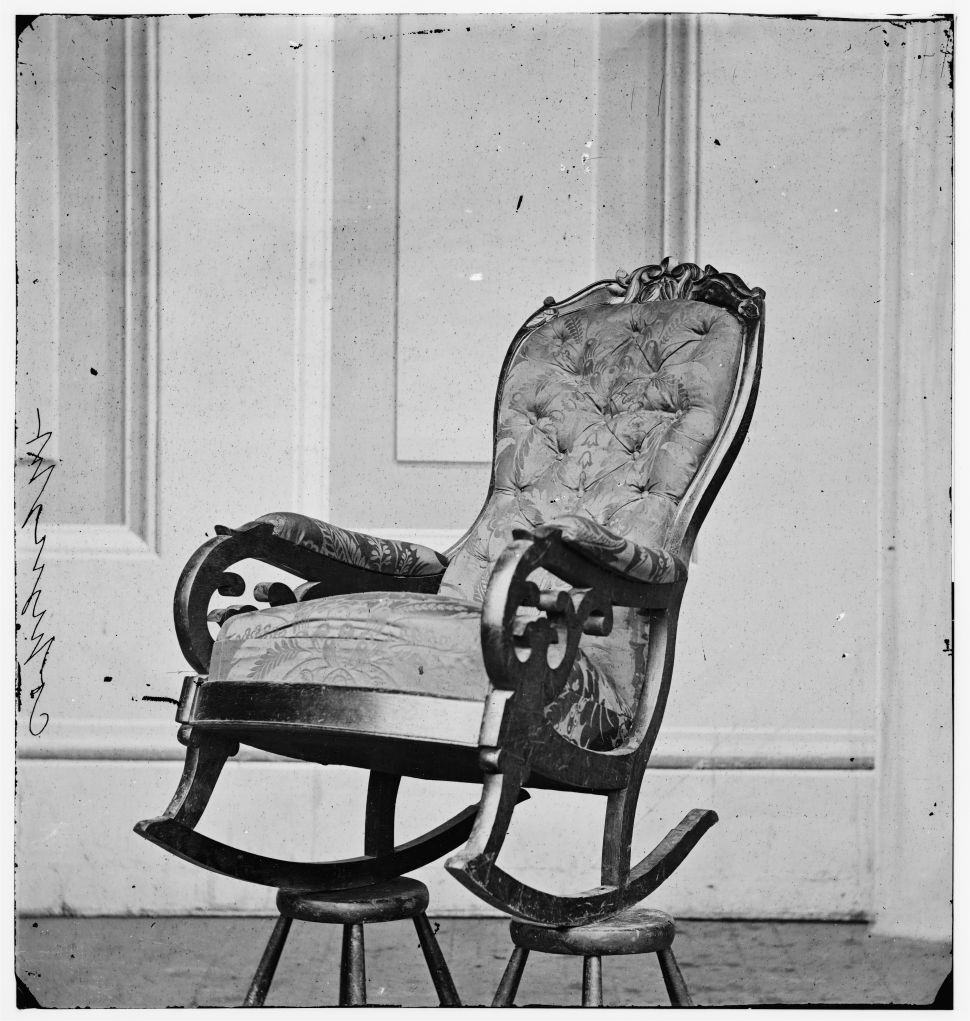