The release of new emails from Mr. Blumenthal marked a milestone for the committee, characterized committee chairman, Republican Rep. Trey Gowdy of South Carolina, as “noteworthy,” because no Congressional committee that “has previously looked into Benghazi or Libya has uncovered these memos.”

Yet there was no explanation as to how these emails contained any new insights or information about the September 11, 2012 attack on the U.S. diplomatic compound and CIA base in Benghazi, Libya that resulted in the murders of Ambassador Chris Stevens, Foreign Service Officer Sean Smith, and CIA contractors Tyrone Woods and Glen Doherty.

Mr. Blumenthal himself noted “my testimony has shed no light on the events of Benghazi—nor could it—because I have no firsthand knowledge.”

This has been a consistent theme of the House’s investigation—a frenzy of media fireworks, with little substantive progress made in pursuit of the committee’s actual mandate. (The majority staff of the Benghazi Select Committee did not respond to requests for comment).

Led by a an 18-member Republican staff, whose full time employees are paid an average of $128,750 per year, the Benghazi Select Committee has proceeded at a plodding pace. Thus far, it has held only three hearings and by the end of this week will have interviewed just 29 witnesses. In comparison the Congressional investigation into the Iran Contra scandal lasted 10.5 months, during which time investigators conducted 500 interviews along with 40 days of public hearings.

The lack of progress is especially striking considering seven Congressional committees and a State Department Accountability Review Board already conducted inquires into the attack. Most recently the findings of the Republican led House Intelligence Committee found no evidence for many of the accusations hurled at President Barack Obama, Hillary Clinton and other government officials.

Over 13 months the Benghazi Select Committee has spent more than $3,500,000, exceeding the budget of the entire House Intelligence Committee. This figure does not include significant expenditures made by the State Department and Defense Department to find and declassify material requested by the committee or the expense of witness travel for those who work for the government.

While exact dollar amounts spent by federal agencies are unavailable, details released about other declassification processes shed light on these costs. In March 2014 the Defense Department informed Democratic Rep. Adam Smith, they had spent “millions of dollars” and “thousands of man-hours to responding to numerous and often repetitive Congressional requests regarding Benghazi.” Currently the State Department has 12 full-time staff members paid between $63,700 and $150,000 reviewing Hillary Clinton’s emails “a process that could cost more than $1 million” according to the National Journal. The total cost for these document queries could run well into the eight figures. For example, the IRS spent $14 million responding to Congressional investigations into accusations it politicized the tax-exemption application process.

The Benghazi Select Committee has little to show for the significant expenditure—aside from a trail of unfulfilled promises by its Chairman. “We will have hearings in January, February and March,” Rep. Gowdy (R-SC) announced in December.

The committee held a single hearing in January, focused on berating State Department legislative liaison Joel Rubin about the production of documents. CIA representative Neil Higgins escaped with a mild talking to.

Two days after his December announcement, Rep. Gowdy told Fox News’ Greta Van Susteren the committee would hold a hearing in January to explore why the State Department was in Benghazi. That hearing never occurred.

In February, Rep. Gowdy sent a letter to the committee’s ranking Democratic member Elijah Cummings (D-Md) informing him that “beginning as early as April I intend to start interviewing” a list of twenty prominent members of the Obama administration including Chairman of the Joint Chiefs of Staff Martin Dempsey, former White House Press Secretary Jay Carney, Clinton State Department Chief of Staff Cheryl Mills among others.

According to a Democrat committee staff member, “The committee has yet to interview a single person on Gowdy’s list.”

A Democratic committee, who requested anonymity, aide told the Observer, “The Select Committee has never done four interviews a week.”

Rep. Gowdy now states the committee will continue its work into 2016 raising its cost to taxpayers to more than $6,000,000, casting his inaction as the result of the Obama administration’s slow pace at producing requested documents, a questionable premise. Rep. Gowdy began receiving documents in August. The committee did not make its first request to the State Department until mid-November, six months after beginning its work. His document request to the Department of Defense was only delivered in early April of this year.

Rep. Gowdy has proceeded in a similar vein while attempting to schedule Hillary Clinton’s appearance before the committee. In early September Stop Hillary PAC, which was “created for one reason only—to ensure Hillary Clinton never becomes President of the United States,” delivered a petition with 264,000 signatures demanding Gowdy call the Secretary of State to testify.

The next day, he asked Rep. Cummings to reach out to Ms. Clinton on his “behalf to determine whether she would testify.” On a November 12 phone call with majority and minority committee staff, Clinton’s team confirmed she would be willing to testify before the committee in December. Rep. Gowdy recently moved the goal posts, asking she appear for a private transcribed interview, as opposed to a public hearing.

Recently, the committee has shifted some of its focus from investigating the actual attack in Benghazi, to reviewing policy decisions made by Hillary Clinton regarding Libya more than nineteen months prior to the attack. Rep. Gowdy, confirmed this to Politico, which reported that “broader problems with the Obama administration’s Libya policy—could prove to be an ugly albatross weighing on the Clinton campaign.”

Rep. Cummings believes these efforts are part of “a fishing expedition for anything they can use against Secretary Clinton in her presidential campaign.” He continued, “After a full year, it now seems obvious that this investigation is being dragged out in order to attack Secretary Clinton and her campaign for president—squandering millions of taxpayer dollars in the process.”

In May of 2014 it was reported that Republicans worried that if they created a Benghazi Select Committee it would fail to produce tangible results. “Investigate and find nothing new, and the committee looks like a bunch of tin-hatted obsessives,” wrote Eli Lake. One House member told Lake, “This could be a rabbit hole.”

It has turned out to be an extremely deep one. 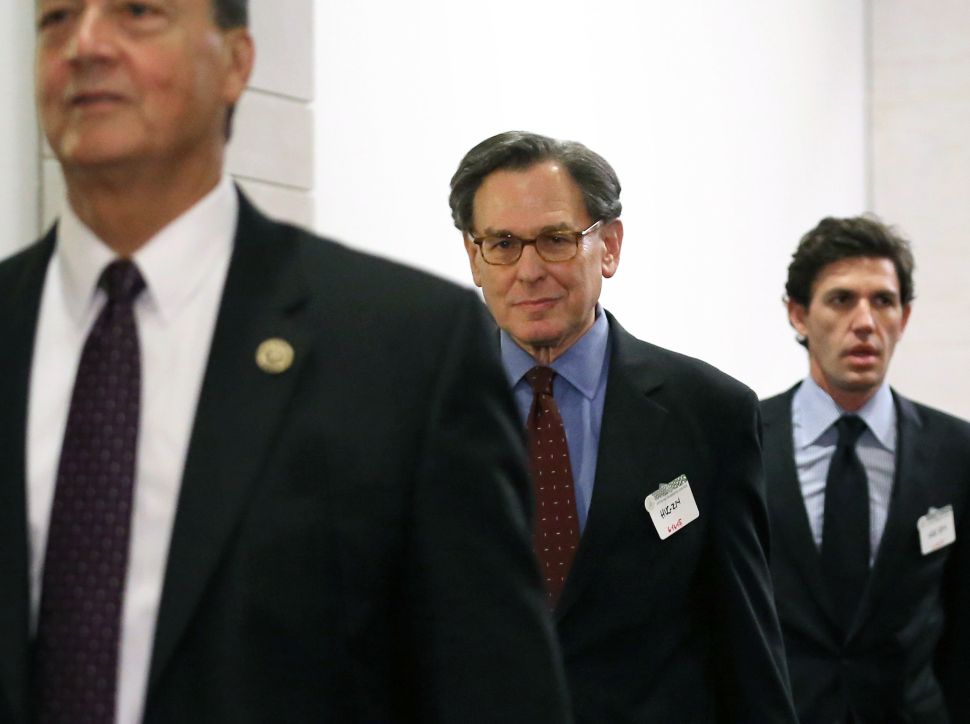