The New York City Housing Authority let dozens of apartments sit vacant for more than a decade—one for 21 years—and lost out on roughly $8 million in potential rental income, according to a new audit from Comptroller Scott Stringer’s office.

Mr. Stringer’s team studied 11 of the authority’s 328 developments, and found 80 units had been left uninhabited awaiting major repairs for 10 years, while another 161 had been empty for between three and 10 years, and one—in Manhattan’s Harlem River Houses—had been left off the rolls since 1994. At a time when NYCHA’s waiting list is 270,000 families deep, and it faces hundred million dollar operating deficits, the comptroller slammed the situation as unacceptable.

“If you look at the amount of vacancy over this long period of time, you can be sure that people who were living in homeless shelters or were languishing on waiting lists could have been in some of these apartments over the last decade,” Mr. Stringer, a Democrat, told reporters at a press conference outside Brooklyn’s Ingersoll Houses. “Every housing unit in NYCHA is precious.”

Public housing apartments marked for major renovations had been left off the rent rolls an average of seven years, but even those slated for minor repairs like lead abatement could sit vacant for more than half a decade. As of September of last year, the authority estimated that 1,366 of its units were vacant

But Mr. Stringer also argued the authority did a poor job of tracking the actual status of apartments it had removed from its rolls for refurbishment. His office found some of the supposedly “vacant” apartments awaiting rehabilitation had been merged with other units to accommodate large families, while others had become home to a small city-run community or a private medical practice.

At others, however, auditors discovered old food, graffiti and liquor bottles—possibly the leavings of squatters.

“This suggests another problem, as we experience an uptick in crime in our developments. We are also concerned about people living in NYCHA who are strangers to the building,” he said.

The audit approximated the total loss of potential rental income to be $7.7 million.

The comptroller said that the problem stretched back decades, well before Mayor Bill de Blasio’s administration took charge of the authority last year. Yet he said there had been no changes under the new regime and claimed a 2013 internal audit at the authority had found the same problems he had, but apartments were sitting vacant longer than ever.

“A year and a half later, 18 months later, I’m here to tell you that not only have things not improved as it relates to vacancies, it’s actually gotten worse,” he told the Observer, though had kind words for Shola Olatoye, Mr. de Blasio’s NYCHA chairwoman. “I want to work with the NYCHA chair.”

The authority officially concurred with a number of the audit’s findings, and blamed its infamously attenuated resources for the failure to swiftly turn over units, noting that it had to devote much of its capital funds to the daily needs of residents and employees. It noted, however, that its vacancy rate is at just one percent—the lowest in a decade—and said it was already addressing many of the issues through its “NextGeneration” overhaul plan.

“With thousands of families on the waiting list for public housing and residents with critical pending transfer needs, managing and turning over our vacant apartments effectively and efficiently is vital to our operations,” a spokeswoman said.

The audit triggered a bitter Twitter battle between Mr. Stringer’s office and Mr. de Blasio’s, as Peter Kadushin—a spokesman for Mr. de Blasio—repeatedly labeled the study’s findings “misleading.” A Stringer spokesman, Eric Sumberg, fired back by pointing out NYCHA had admitted to the problems.

“Call your own agency and get on the same page #embarrassing,” Mr. Sumberg tweeted back.

Speaking to the Observer, Mr. Kadushin contested Mr. Stringer’s assertion that the vacancy situation has deteriorated under the de Blasio administration, asserting NYCHA was renting out apartments faster than it had in years, having  the number of available vacant units in half since 2014.

“The comptroller’s audit ignores the facts and the significant progress made to fill vacant units under the de Blasio administration,” he said. 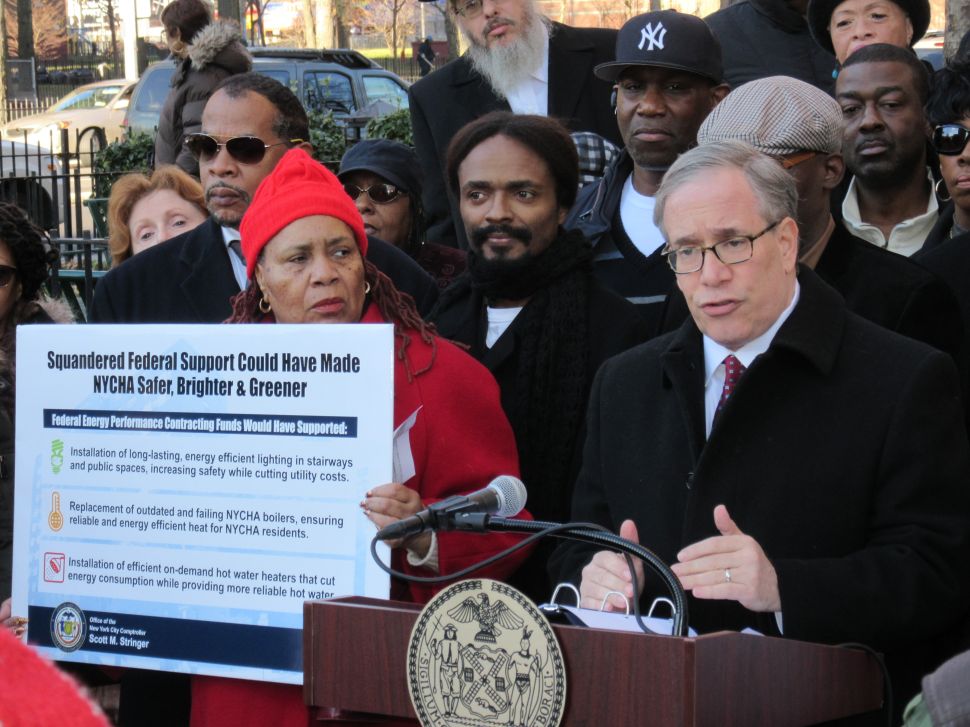