Veterinarians are soon going to have access to a product, VetiGel, that surgeons, generals and scoutmasters of Boy Scout troops are likely to want next. VetiGel is a blood stopping agent that seems to represent a paradigm shift in how bodies begin healing after a wound, even in wounds that have typically all but guaranteed death in a patient (human or animal).

The company that makes the gel is opening pre-order to veterinarians on Friday, with an event at the Brooklyn Zoo. Indications for human use will take a bit longer.

Over the last few months, three different top vets in the Northeast have been using the product, offering feedback to Suneris on its use cases and effectiveness. The three vets work in neurosurgery, orthopedics and soft tissue veterinary medicine.

“That represents the three corners of the specialty use cases of VetiGel,”Joseph Landolina, the product’s inventor and the company’s CEO, told the Observer during a phone call.

Each of the beta testing vets will be on hand for the event on Friday, to answer questions about their firsthand experience with the product. According to Mr. Landolina, 3000 vets across the country have expressed interest in the product already. Veterinary applications don’t require regulatory approval.

Mr. Landolina believes the company is three or four years away from approval for the product to be used in human surgery, but also that it may be approved for use by the military and paramedics in the next year.

The top product on the market for achieving hemostasis (stopping bleeding) in humans is called Floseal, made by Baxter International Inc. According to the company’s most recent letter to shareholders, the product generates about $700 million in revenue per year. It uses the animal enzyme thrombin to signal a bleeding body part that it should start making fibrin, which is how tissue regeneration begins. It has to be prepared before use and must be used within two hours.

Thrombin was first discovered in 1909, the first big advance in hemostasis in centuries; however, it took until 1998 for products based on that research to win FDA approval, because making it requires human or animal tissue, which can transmit disease. Writing in the Indian Journal of Urology, two urologists argue that the full promise of these products may not yet be realized.

Unlike Thrombin based approaches, VetiGel requires no preparation and no special storage. Because no animal tissue is used, risk of transmitting disease is dramatically less. Unlike the prior approaches, VetiGel doesn’t force bleeding to stop. It convinces the body it doesn’t need to bleed.

The technology has provoked enough interest that Mr. Landolina was invited to speak at TEDGlobal in 2014.

Mr. Landolina first conceived the basic product, a single polymer gel, before starting college, as the Observer described in January. Later, it would occur to him that he might get even better results by adding a second polymer. After experimenting with several combinations, he found one that convinced tissue that a wound had been closed, not with something foreign (such as with pressure or stitching), but with other tissue. His team could tell right away that the combination worked better, but it would be months before they would suspect it fostered fibrin growth in such a way that may hasten healing and reduce scarring.

Investors are starting to realize the product’s unusual promise, too. The company is in the middle of closing its Series A round now. Because it’s not closed, Mr. Landolina was not able to reveal who lead the round or how much the company has raised. He told the Observer that his staff is up to 25 people now.

“We’ve pretty much hit capacity,” he said of the small office where they work in Sunset Park, Brooklyn.

The team not only runs its business there but, unlike a lot of product companies, it makes VetiGel in-house. Anticipated demand should overtake what the little space can handle, and that’s why it’s looking for a 70,000 square foot facility. “We’re in the final site selection between New York and New Jersey,” Mr. Landolina told us. He hopes to move operations to a new building at the beginning of next year. 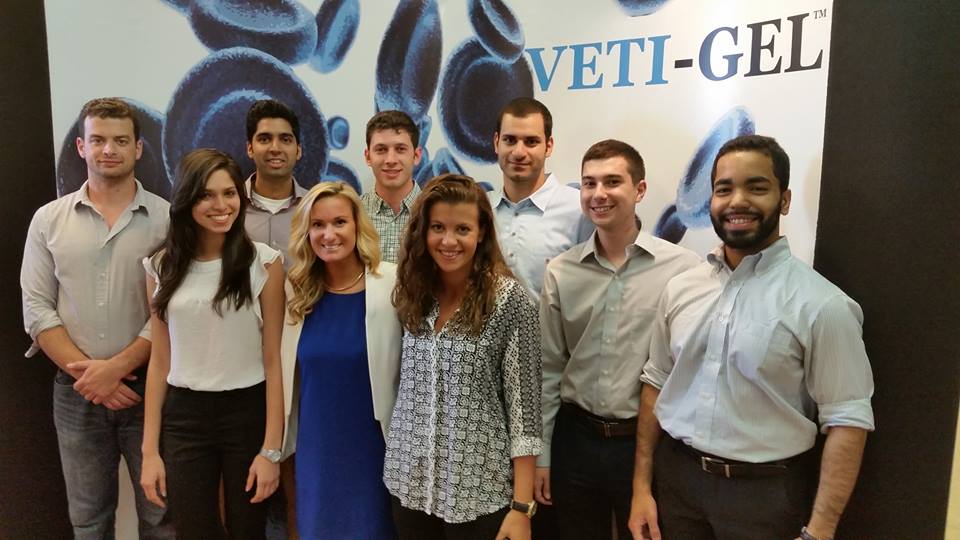