Assemblyman Nick Perry, a Brooklyn Democrat, and a number of freed victims of wrongful imprisonment demonstrated today on the steps of the New York State Supreme Court building in favor of the lawmaker’s proposal for a new state body to investigate misconduct by district attorneys and their offices.

Mr. Perry, who is spearheading the legislation along with Republican State Senator John DeFrancisco of Syracuse, argued that the criminal justice system grants too much power and discretion to prosecutors. He claimed DA’s and their assistants often aim only to rack up convictions, rather than see the proper person punished for a crime.

“The scales of justice are, unfortunately, tremendously imbalanced,” Mr. Perry said. “There is no checks or balance provided in our system to ensure that prosecutors are operating in full observance of the trust bestowed on them by the public.”

The State Commission on Prosecutorial Conduct would be modeled on the State Commission on Judicial Conduct, which looks into potential malfeasance by judges. The body would consist of 11 members: two appointed by the governor, two by the president pro tempore of the State Senate (a title usually belonging to the majority leader), one by the State Senate minority leader, two by the speaker of the Assembly, one by the Assembly minority leader and three by the chief judge of the New York State Court of Appeals.

The appointees of the governor and legislative leaders would be evenly split between prosecutors and public defenders. One of the chief judge’s appointees would be an appellate court judge, while the other two would have to be jurists from a lower court.

The commission would receive and review complaints about prosecutors and decide whether to hold a hearing and look at evidence and transcripts from cases where misconduct allegedly occurred. If it discovers evidence of wrongdoing, the commission could publicly admonish or censure the DA in question or even ask the governor to remove the prosecutor from office. It would also have the power to unilaterally suspend the prosecutor in question from his or her job without pay.

“It will put at last a check on the tremendous power of prosecutors, and it will signal to those who hold that very powerful office that they are not all-powerful as it appears,” Mr. Perry declared.

Mr. Perry said he did not know if Assembly Speaker Carl Heastie would push for the bill in the leadership role he assumed in February, but the Bronx lawmaker was among the measure’s co-sponsors the previous month. 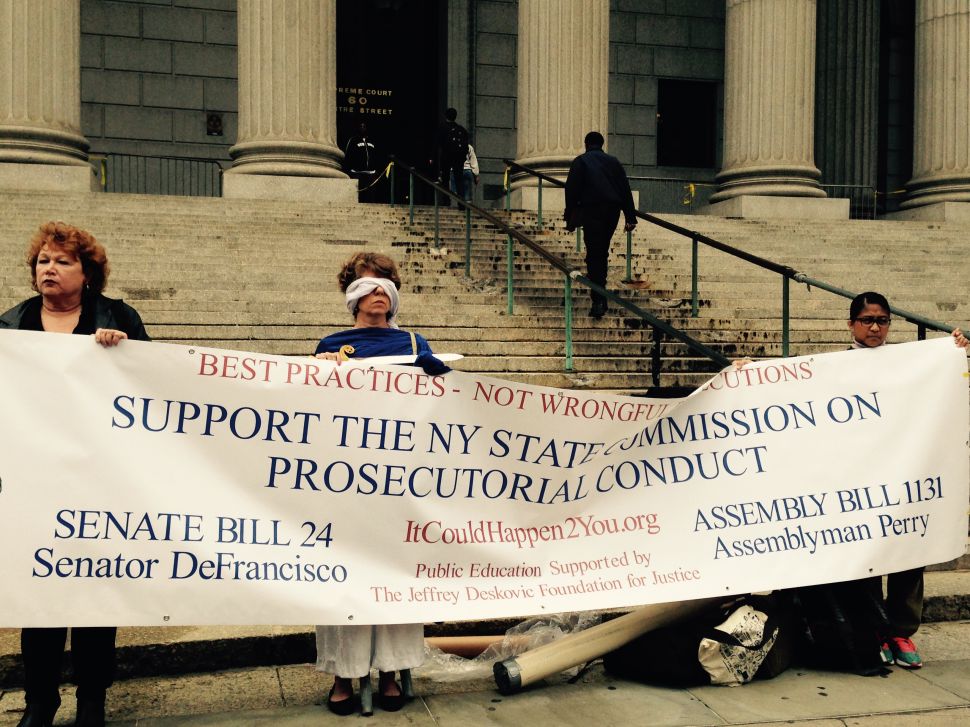