Governor Rick Perry joined the field of official candidates for the U.S. Presidency today. Which is another way of saying that he wants the job of saving us all from a zombie apocalypse, should it finally occur between 2016 and 2020. However, the public doesn’t seem to be giving him or his fellow hopefuls much thought. The presidential election is so far away that anything can happen. Any one of these ladies and gentlemen could surge ahead and truly capture the public imagination (though at this point, Hillary Clinton is handily generating the most interest online).

So as we consider which candidate we’d prefer in the position of Zombie-Fighter-In-Chief, it is worth asking whether anyone in the Presidential field is grabbing the public imagination nearly as well as zombies already do, at least judging by search volume

Google Trends is a service the company provides that lets users see relative search volume over time—emphasis on relative. The graph can show a huge spike on something not many people are interested in if it is compared to something that Google users are even less interested in. Search volume suggests that candidates have had small bumps in people’s interest over the last 90 days (usually as they announce), but this rapidly tapers off as each of the candidates settles into comparable levels of obscurity, at least in the collective minds of Internet users.

That said, that “spike” will dwarf back down to nothingness when you compare either of those topics to something people always like. Such as “Zombies.”

Which we will do. Below.

So, the following focuses primarily on candidates that have formally declared their intention to run, on the GOP side. We’ll throw in the leading Democratic candidate for the sake of comparison. Google Trends only lets you compare five search terms, so here are the five GOP hopefuls that are doing the strongest in search.

All graphs cover the last 90 days, because in elections it’s always right now.

Ted Cruz came out swinging early, and so got all the buzz from being first. Rand Paul got bumps as he filibustered against bulk phone surveillance. But basically they all rise once and quickly return to comparable Internet indifference.

The bar graph on the left shows that, on balance, over the last 90 days, Mr. Cruz has generated the most search.

Here’s the next tier of candidates, which looks much spikier- but keep in mind it’s relative search, so these are spikes in extremely low bandwidth. Insert an ’80s one-hit wonder onto this graph and all five candidates would evaporate down to the indiscernible bottom of the graph.

It’s pretty similar to the one above: spikes as they declare and then mostly a slow fade.

For comparison, here’s what it looks like when we drop out the poorest performer, former New York Governor George Pataki, and add the top performer from the graph above, Sen. Ted Cruz. In the graph below, Mr. Cruz takes the green position. The rest is the same as the prior graph.

The bar graph on the left shows that, in relative terms, Mr. Cruz blows this pool away.

Gov. Jeb Bush has not declared, but he has a slight lead in the polls, according to Real Clear Politics (Mr. Cruz is polling at fifth). So let’s see what it looks like when we move Ms. Fiorina out of the first graph and put the former governor of Florida into her spot, in purple.

So the polls say he’s ahead, but no one is trying to learn anything about him online. Could that just be name recognition at work? Who knows.

Here’s what we do know: in terms of the interest of the collective mind of the Internet, former Secretary of State Hillary Clinton is able to maintain a consistently higher level of interest than any of the current Republicans, but she’s not trouncing them. Some have even briefly pulled ahead of her in search, from time to time.

This is important, because the level of interest a candidate generates is an important indicator of whether or not he or she will win. For example, a study that came out in 2013 showed that the candidate who generated the largest volume of tweets in a Congressional race tended to win. Even more interestingly: it didn’t matter if the tweets were positive or negative. Google Trends is another way to show people are talking about you, and that’s powerful.

That said, as promised, zombies consistently outperform them all.

Mr. Cruz, Mr. Paul, Mr. Rubio and Mrs. Clinton have each managed to briefly rise above the public fascination with zombies, but none of them have managed to hold out over time. Which is exactly how the zombies win.

It could be a very bad sign for things to come. 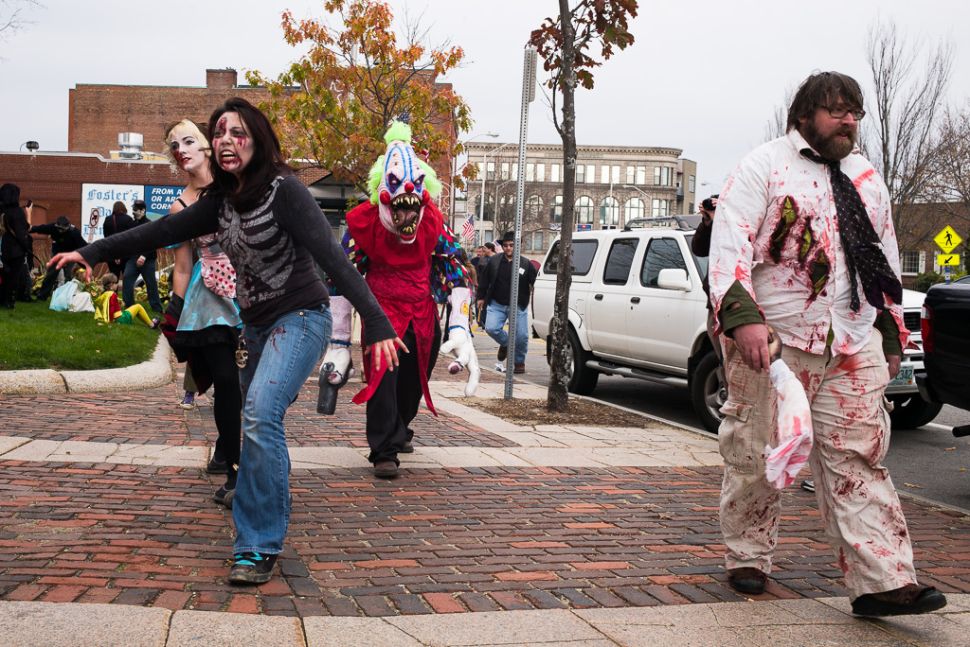