A rose to the totally-not-staged, completely impromptu town hall meeting that organically occurs the second Nick rolls into the dudes’ hotel suite.

A trillion dead, barf-covered roses to Nick for describing Kaitlyn as a “really cool chick.” I bet Nick’s the kind of guy who describes every remotely-good thing as “dope,” calls his mom “home girl,” and just generally makes my skin crawl in every imaginable way.

Brushin’ off the barf from those trillion roses and giving them all to Josh The Welder, Protector of Ye Good Olde American Values. “You called her a cool chick,” he says to Nick, the muscles borne from years of welding bulging. “Is she a cool chick or an amazing woman to you?”

Roses to all the dudes for valiantly shivering through what had to be the coldest Rose Ceremony in Bachelorette history. They’re in Queens in the middle of winter, A.K.A. the surface of Pluto. Why did no one let them wear coats?

Extra roses to Kentucky Joe, who I believe rounded the bases, if you will, of the first three stages of hypothermia.

A rose to all the meals that could be going to America’s homeless population, or at least to me, but instead get left uneaten on EVERY. DAMN. DINNER TABLE. IN BACHELOR/BACHELORETTE HISTORY. Honestly, why even serve food?

Whatever, I guess all the non-eating paid off, because Ben H. finally proves he’s ~vulnerable~ and scores a rose.

A rose to the exact moment Kaitlyn realized Ian was taking the Mariachi date way. too. fucking. seriously.

A rose to Josh The Welder, Protector of Ye Good Olde American Values, who is pure as freshly-fallen snow, definitely still a virgin, and gets played so hard on the group date.

Josh The Welder tells Kaitlyn that none of the other guys like Nick, either; they’re just not speaking up. But when Kaitlyn asks the guys if they’ve all been honest with her, they say they have—leaving Josh The Welder looking like a big ol’ idiot, sputtering in his attempt to remind Ben Z. about “that thing he said by the bus.” Nick, ultimately, gets the group date rose. It’s honestly so tragic, I can barely watch.

Oh—and all this while Josh The Welder sports a god-awful haircut he thought would show Kaitlyn his “trust.”

ATTENTION, ATTENTION, a rose to what might be a first in Bachelorette history: the show’s star explicitly telling a contestant—especially this early on—that she ALSO FEELS LOVE FEELINGS FOR HIM. (Typically, when a contestant drops the L-bomb, the star has no choice but to mumble “thank you” or haphazardly pat a passing monkey or something, so as not to give viewers a hint at who’s really the front-runner.)

“I’m falling in love with you,” Shawn tells Kaitlyn on their one-on-one date, following a harrowing story about that time he almost died in a car crash and was in the hospital for like a billion years.

“I feel the same way,” she replies.

Aaaaaand this week’s complete crash-and-burn rose goes to Ian, who claims he’s “not interested” in Kaitlyn anymore, but in fact is just a wittle baby whose feewings are hurt because Kaitlyn doesn’t wanna bang him—unlike like all the other girls who’ve ever had the enormous privilege of feasting their eyes on his glorious, Princeton-educated, almost-died-in-a-car-accident bod.

ACTUALLY, IAN, I AM FINE WITHOUT UNWRAPPING ANYTHING THX.

No roses to me, because I totally misread Ian and was practically ready to sacrifice my first-born child in exchange for his undying love. I am ashamed.

A rose to next week’s episode, which, judging by the preview, IS WHEN ALL THE SEX HAPPENS. Bring on the tears. 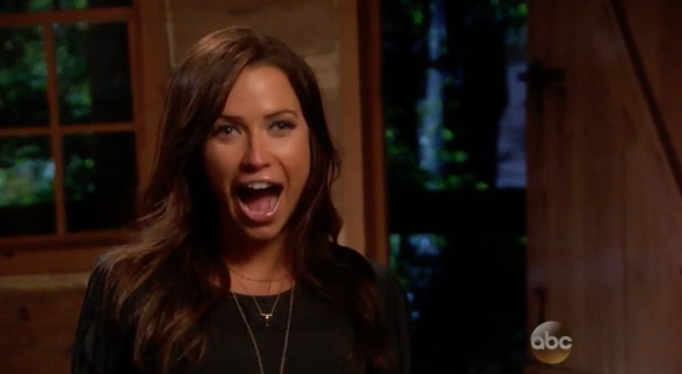