Previously on “A Millennial Reviews…”


Confession time: I just watched The Wire for the first time. I know. It’s so good. Have you seen The Wire? You should really see it. I can’t believe you haven’t seen The Wire. I’m actually kind of jealous of you for getting to watch it for the first time. In my personal opinion, The Wire is the best TV show ever, although I also hold Breaking Bad to be one of the best.

Let’s back up. I hadn’t seen The Wire until recently because I haven’t been in a long term relationship since before white people knew about its existence. The last serious girlfriend I had was in 2007. She was a Suicide Girl named Chocula Shastacola and the only thing we binge watched together was each other snort crushed up Xanax. That’s not true, we also watched Rocko’s Modern Life, which is, in my personal opinion, one of the best TV shows of all time. Anyways that was a long time ago. In the last few years I’ve matured a lot and now I’m dating a lovely barista/9th wave feminist radical/street crocheter named Madeline except she recently changed her name to the more gender neutral Oval. We met in improv classes which I’ve been taking and failing repeatedly for about 9 years now. Oval and I recently became serious and decided to take our relationship to the next level by participating in the greatest of all American mating rituals: making another person watch The Wire with you. It was AMAZING. I can’t wait to dump her and make someone else watch The Wire with me while I say things like “oh my god, this next one is so good,” and “dude, watch this. I don’t even want to tell you who’s about to die.”

We watched about 9 episodes before we realized that it isn’t on Netflix and we were actually watching something called Columbo, which I’ll be getting to next week because, man oh man, was that show full of problems. Once I had tracked down my ex-roommate’s mom’s HBOGO password we were on our way.

Season 1: This one starts with a frank and gritty look at the drug trade taking place in the streets and housing projects of Baltimore. Can I just say that I love the way these kids talk? I do impressions of them all the time. My friends think I’m hilarious because of the tongue in cheek way I incorporate “hood” slang into my conversations. The other day I walked into work and said “Which of you n-words ate that kashi I left in the breakroom?” They thought it was hilarious. Also, whenever someone takes a group photo of me I like to throw up my signature gang sign (two horizontal fingers). Has anyone else ever done that? Anyways, the show then moves into the police force side of things, which involves a lot of fat cops wearing these really third wave ska esque suspenders that I love. Our protagonist, arguably, is detective McNulty, who I think is supposed to be Irish? I liked him a lot. I bet he also has a Dropkick Murphy’s tattoo that he can’t afford to get covered up.

Season 2: Very cool of Tom Waits to climb out of the coffin he sleeps in to sing his own song for this season’s theme. Actually this season is a lot like Tom Waits in that I didn’t understand a single moment of this it but I’m told I should feel very strongly about it in one way or the other. I think I loved it. That duck was great. I love cute animals.

Season 3: More cops and drug dealers. Have I mentioned how much I love Omar Little? Omar Little is, in my opinion, one of the best characters in television history. Probably the best thing about watching Omar in action is that I now understand all of these memes I’ve been using. Another thing I love about this show is how accurate it can be with it’s minor historical details like Brother Mouzone wearing those Buddy Holly glasses that everyone was so into back in 2004. The Wire is truly an uncompromising dissection of American society.

“Sometimes things “come down to the wire”, and sometimes police use what’s known as a “wire” to record crimes. Really makes you think” – Stringer Bell

Season 4: Eventually every television program runs out of ideas and decides to introduce a children’s version of the show. Take Tiny Toons, Scrappy Doo, or Muppet Babies for example. This season of The Wire unfortunately panders to a younger and dumber audience with the introduction of a pint sized cast that’s less edgy and more family friendly than previously introduced characters. The foursome plays to some pretty tired and well word tropes. A tween named Namond Brice is clearly the Leonardo of the group, a moral leader who keeps the others in line. Next there’s Michael Lee, the bad boy, followed by Randy Wagstaff, the nerdy entrepreneur. Finally we have Dookie, the comic relief. If I’m not mistaken, I think these kids later went on to form a boy band called Unlocking The Truth. Season 4 isn’t all bad though, the mumblecore guy from Kids has a pretty memorable death scene.

Season 5: Now we’re talking. Listen, I’m a huge dork. I may be conventionally attractive, wealthy, and loved by everyone around me, but I consider myself a nerd because I LOVE comic books. Which is why I thoroughly enjoyed the fact that David Simon decided to crank up the show’s excitement factor here by turning Omar into a superhero. He was already a great character but now he’s jumping out of 3rd story windows? I’m sold. Other notable highlights include seeing Steve Earl, who I once did speedballs with at Bonaroo, and the season’s unapologetic depiction of the ethical realities of blogging.

“Hi, I’m Andre Royo, or as you know me, Bubbles. We had a lot of fun today playing cops and robbers, but drug abuse is no laughing matter. If you or someone you know is addicted to heroin, please call 911 and have them arrested. Have a great night, America.” – Bubbles

Well there you have it, The Wire. Best show ever made. 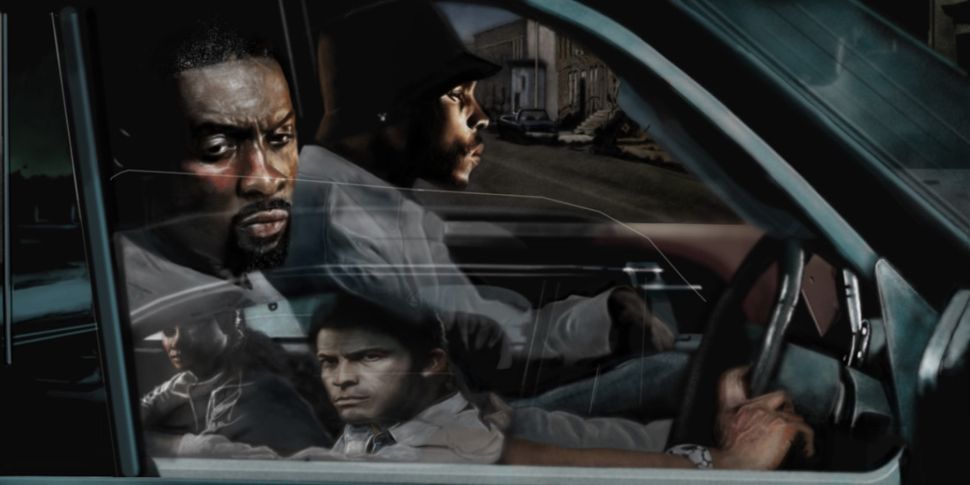