What if an actual crazy person got his hands on Pakistan’s nuclear arsenal, and only America’s horniest men could stop him? That’s the basic premise of The Brink, HBO’s alleged new comedy. In theory, it’s not a bad set-up for a satire. If anything, this country’s gang-who-couldn’t-drone-straight foreign policy in the Muslim world deserves an even more ruthless roasting than its comedians have given it, and anxieties about the so-called “Islamic bomb” and the impenetrable nexus of militant groups and secret agencies that surround it on all sides are ripe for Strangelovian spoofing. Homeland Season Four, but funny on purpose? Starring Jack Black, Tim Robbins, Aasif Mandvi from The Daily Show, and Pablo Schreiber from The Wire Season Two? Sure, this could work.

Alas! “Pilot” (the default title for a series-premiere actually fits the story) gets no closer to Kubrick than the trisected structure that creators Roberto and Kim Benabib cribbed from the good Dr. Looked at in the most generous light imaginable, Black’s low-ranking Islamabad-based diplomat Alex Talbot is a bawdier version of Peter Sellers’s Colonel Mandrake, Robbins’s even randier Secretary of State Walter Larson is a less macho take on George C. Scott’s General Buck Turgidson, and Schreiber’s Navy fighter pilot Zeke “Z-Pak” Tilson is a pill-popping, civilian-casualty-avoiding echo of Slim Pickens’s Major Kong; together, it seems, they’ll have to help Esai Morales’s President Julian Navarro—handsomer than Sellers’s Merkin Muffley but just as ineffectual—keep a powerful general with paranoid delusions about enemy plots against his nation’s reproductive capabilities (yep, it’s that direct a swipe) from igniting World War III. I don’t remember Strangelove having this many dick jokes, though. Okay, this many bad dick jokes.

The closest The Brink comes to an original, interesting idea is positioning its two leads as peaceniks and idealists beneath their horndog exteriors. Unlike on Veep, which is essentially an experiment to see how long a political comedy can go without its characters expressing any kind of actual political ideology — which is itself a political/ideological statement, i.e. cynicism—Talbot and Larson between them, express contempt for Wall Street kleptocrats and Defense Department chickenhawks while working for clean for the poor and a diplomatic solution to a potentially nuclear crisis respectively. We don’t yet have a picture of what motivates Z-Pak beyond his apparent skill as a pilot and a desire to make ends meet, but he too seems fundamentally good-hearted, given his reluctance to indiscriminately bomb a residential area. Comedies about assholes given the power of life and death can be hard to take unless exceptionally executed; that doesn’t appear to be an option here, so making them more or less decent dudes is a smart move.

More’s the pity, then, that the decency is buried beneath all those jokes (using the term loosely here) about threesomes and booze and weed and STDs and Asian hookers. Asian hookers, for God’s sake! It’s 2015! Some of this might be tolerable were any of it actually funny, but with the possible exception of the phrase “lemonade my balls”—I’d tell you the context but it’s honestly no better or worse as a non sequitur—nothing here is even funny-adjacent. With Adult Swim, Comedy Central, and HBO firing on all comedy cylinders these days, producing a half hour without a single laugh-out-loud moment is a bonafide achievement, let alone with a cast like this. And say what you will about the oeuvre of the episode’s director Jay Roach, but that first Austin Powers movie is a fucking scream. This isn’t so much as a whimper.

With Ballers occupying Entourage’s vacated love-it-or-hate-it lifestyle-porn slot in the lineup, The Brink joins True Detective’s tepid Season Two as the Goofus to the Veep/Game of Thrones twofer’s Gallant. Like Z-Pak’s fateful mission, it’s gonna take some doing to turn this thing around. 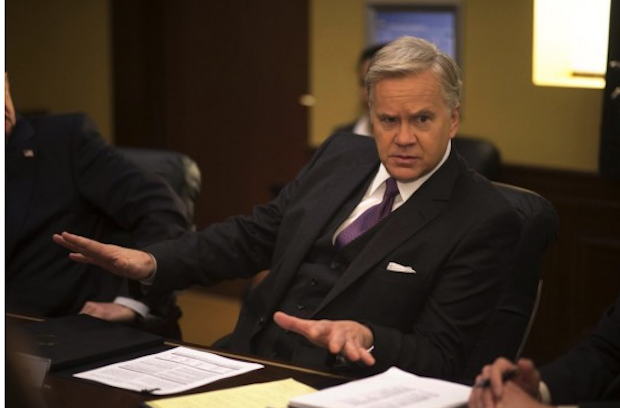