Raw Thrills, the company that gave the bars of America Big Buck Hunter, is now manufacturing and distributing Killer Queen Arcade, a giant, ten-person arcade game from two indie developers in Brooklyn. The game’s creators, who had never previously built a physical product, talked about the many iterations of the game, from a life field game at the Come Out And Play Festival to a mass-market high end arcade cabinet game, at a meetup at Betaworks in Manhattan Wednesday night.

“We realized our iterative design process that we learned in software also applies in hardware, it just takes a lot longer,” Joshua DeBonis, who invented the game alongside Nik Mikros, said at the event.

The team hopes that it has neared the last iteration of the game, though they expect some more changes to come as Raw Thrills’ scale enables the company to find efficiencies in the cabinets’ construction; they currently have a starting cost of about $11,500.

About 18 cabinets are out in the world right now, mostly in arcades but also in startups like Kickstarter, Cards Against Humanity and Pure Storage (which has two).

Here’s some ways that the cabinet has evolved from the first version the team built by hand (see that here):

[youtube https://www.youtube.com/watch?v=zorgpC93Aq4]
Even though Killer Queen is a ten-person arcade game, it’s not essential that ten people play all the time. On each team, one person plays the Queen, which has the most offensive power. Everyone else plays workers, who can transform themselves into soldiers. Workers can gather nectar and ride the snail, but they can’t fight. Queens and soldiers can fight, but they can’t do the other two tasks.

A blue team plays against a gold team, and each team is made up of at most five people. Each match can be won either by gathering enough nectar, riding the snail across the bottom of the screen or killing the opposing team. The game looks a lot like the arcade classic Joust, but it really is just as fun to gather nectar or ride the snail as it is to fight (this reporter has played the game a lot).

The fact that it’s a multiplayer, in-person game is the crux of the experience, according to Mr. Mikros and Mr. DeBonis. They were never interested in building a web version. The whole point is to play very close to other people and experience the game together. If you played online, you couldn’t have that experience of whispering to your teammates: “we can win this by snail.” There’s really nothing like that.

The team may design a smaller version, for fewer players, that would be used in bars. 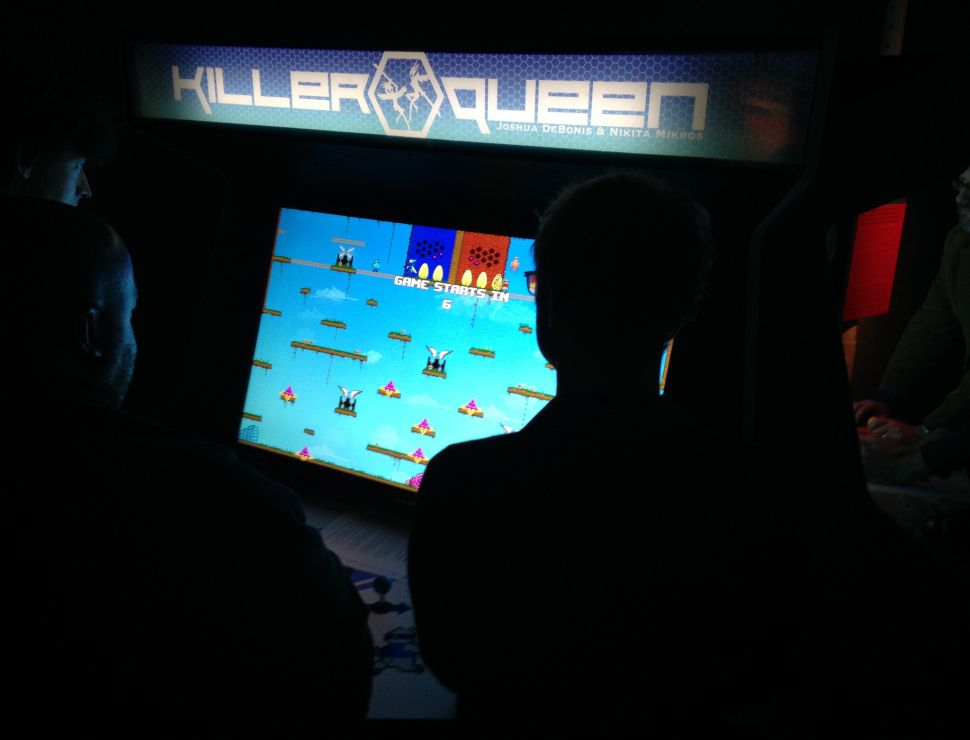