Does the ambitious kitschy genius of All-American artist Jeff Koons have global appeal?

Basque tourism officials are betting on a Koons’ traveling retrospective to lure summer crowds to Guggenheim Museum Bilbao and ultimately to the port town on the coast of Northern Spain.

The Koons show opened last week at the Guggenheim satellite, which has for nearly two decades acted as a gateway for visitors to the beaches of San Sebastián and the vineyards of Rioja, said Itziar Zarandona of Basquetour, an arm of the Ministry of Economic Development and Competitiveness. According to Zarandona, Koons projects a positive image that officials are hoping will translate into tourism dollars for the local Spanish economy.

There’s a lot at stake: At the Guggenheim Museum Bilbao, 43% of the tickets sold are from June through September, so the appeal of its summer show is crucial.

The artist’s expansive show is beautifully installed in the sprawling Frank Gehry structure, an iconic building that integrates technological innovation with baroque excess. The symbiotic pairing of Koons’ seductive reflective surfaces with Gehry’s undulating glass, titanium and limestone design offers a fresh backdrop for the exhibition previously shown (in the spring-summer of 2014) at the Whitney Museum of American Art in New York, and then the Centre Pompidou in Paris.

Attendance records were shattered at the Pompidou, with Koons’ survey becoming the most successful exhibition by a living artist in the nearly four-decade history of the institution with over 650,000 visitors.The Whitney pulled in 320,000 visitors during the show’s three-month stint, staying open a full 36-hours straight to accommodate long lines into its historic Breuer Building on the eve of its closing.

“Our expectations are very high for the upcoming months,” says museum spokesperson Alicia Martínez, adding that a concurrent show of 100 works by Jean-Michel Basquiat will round out its seasonal offerings.

The Guggenheim Museum Bilbao was constructed in 1997 as part of a revitalization program following the closing of regional factories and commercial ports during the 1980’s. The $183.8 million investment was recovered within the first six years of its operation according to an official 2004 report, and the institution was widely seen as a success for cultural tourism.

Koons’s close relationship with the Guggenheim dates back to 1996 when plans for a retrospective at its New York headquarters came to a crashing halt as technical difficulties, production delays and cost overruns forced the museum to cancel its show. But the following year the Guggenheim Museum Bilbao opened its doors, acquiring one of Koons’s 43-foot-tall West Highland terrier topiaries, Puppy, for $1.2 million (Connecticut collector Peter Brant owns another) and installing it on the Plaza Aguirre where it has become a beloved symbol of the city.

“I really think it probably takes at least two years on average before I even start to work on something, before I’m sure something is good enough to be made,” said Koons at the opening.

The artist’s penchant for technical perfection and his obsessive attention to detail are reflected in exhibited works like Balloon Venus (Orange), 2008–2012.

Using CT scans to penetrate the surface of a balloon manipulated into the form of the Paleolithic Venus of Willendorf sculpture, Koons secured volumetric data in order to produce flawless surfaces and hyper-realistic facsimiles on a grand scale. Michelle Kuo wrote in her exhibition essay, “…his fabrication standards now easily—and incredibly—exceed those of advanced industry, whether aerospace or military.”

Said exhibition curator Scott Rothkopf, “Both Gehry and Koons have often created ideas for work, whether it’s a building or sculpture, that are in advance of the technologies that exist to make them. And what they have to do is custom fit technologies or work with engineers and scientists to realize their dreams.” 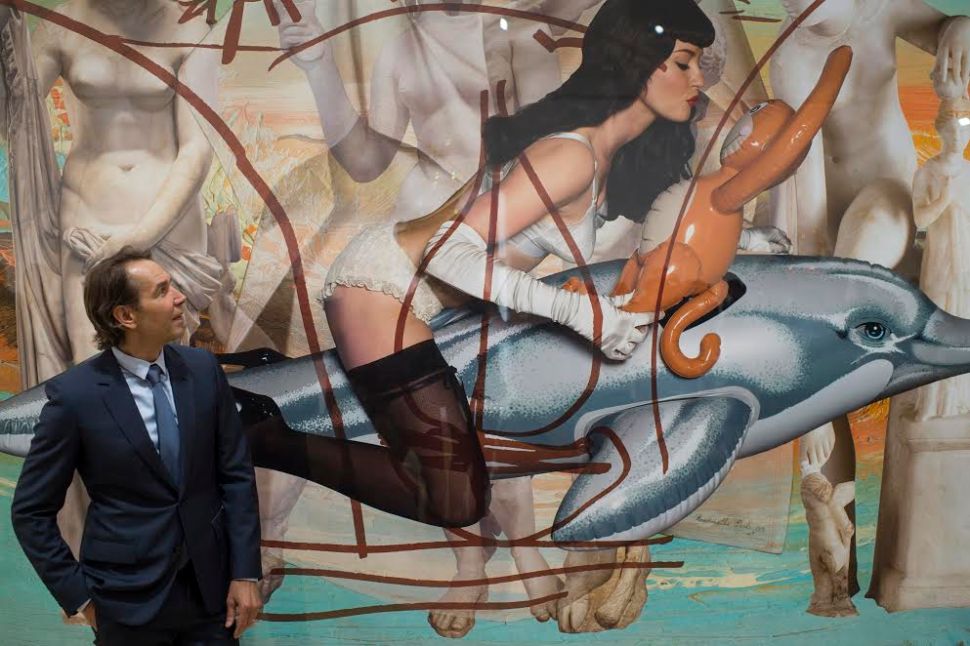