The Guggenheim opened the first major U.S. retrospective of Colombian artist Doris Salcedo on Friday, featuring sculptures and installations completed over the last 30 years. Much of Ms. Salcedo’s oeuvre focuses on the violent history of her native country, but more recent works respond to social injustice, racism, and the colonial history in other regions.

While the Colombian-born and based artist has been using everyday household objects like furniture and clothing in her large-scale sculptures since the 1980s, it is her public installations beginning in the 2000s that have garnered her the most widespread attention and acclaim. In 2002, for the piece Noviembre 6 y 7, she hung chairs at timed intervals on the facade of Bogota’s Palace of Justice to commemorate the 17th anniversary of the violent seizure of the Supreme Court. In 2003, she filled an empty building lot in Istanbul with 1,600 wooden chairs for the eighth Istanbul Biennial. And in 2007, she placed a large gaping crack through the center of the concrete floor at the Tate Turbine Hall with for piece Shibboleth.

The work on view is comparably quiet and contained in contrast with her public interventions, but no less powerful and timely. The exhibition fills the museum’s annex galleries on the second, fourth, fifth, and seventh floors, with a documentary film screening downstairs in the New Media Theater in the basement about her public works. This retrospective exhibition was first shown at the Museum of Contemporary Art Chicago from February 21 through May 24 this year, and will travel to the Perez Art Museum in Miami in April 2016.

On view in the second floor gallery is Plegaria Muda (2008-2010), a series of stacked wooden tables with a thin slab of dirt between, and thin blades of green grass sprouting through the tabletops. The very recent work pays tribute to victims of gang violence. In the back gallery, alcoves have been cut into the wall to hold shoes, sealed tightly with preserved animal skins sewn to the wall with thread. Atrabiliarios (1992/2004) and Plegaria Muda are both signature works for Ms. Salcedo, memorials to individuals killed in violent acts. Through all of her works, Ms. Salcedo’s attention to minute detail is an attempt to recognize and memorialize those individuals buried in the statistics of violent crimes.

Two flights up is one of her earliest untitled series. The installation is comprised of metal bed frames wrapped in animal skin and neatly stacked and folded white men’s shirts pierced with steel rods. The work uses the traditions of minimalist sculpture to respond to the 1988 executions at the La Megra and La Honduras banana plantations in Colombia. Other works between the fourth, fifth, and seventh floors follow a similar convention: stripped down, simplistic forms comprised of found materials such as chairs, hospital beds, and clothing, reassembled through labor-intensive processes that render the objects unless in their conventional forms but pregnant with metaphor. The best example is seen on the seventh floor, in the artist’s long-running untitled series of wooden furniture filled with concrete. The already massive forms have been weighted down with cement—in some cases still filled with clothing and linens—to create immovable visual reminders of their past lives.

All of Ms. Saucedo’s works are labors of love—and amazing feats of engineering. No matter where the work is shown, it is a testament to how effective visual art can be at communicating social messages. However, information about her public works has only been included in the film, which is difficult to access in the basement viewing room. And while the massive scale of her work commands no matter where it’s shown, one wonders the possibilities had she been given the Guggenheim’s Rotunda and spiraling ramp.

The Guggenheim’s retrospective for Doris Salcedo is on view through October 12. 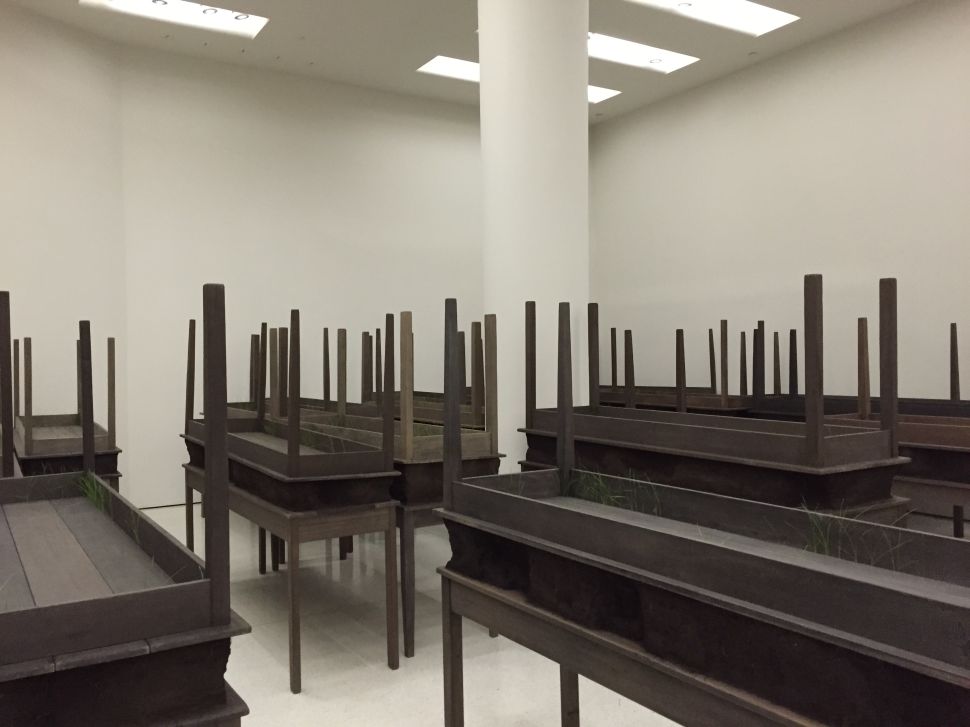