Hi, my name is Graham, and I’m a member of the embedded crew on NBC’s brand new docu-series: The Island hosted by Bear Grylls. In my everyday life, I work as a director of photography and producer. In my career, I have produced a myriad of documentaries in countries like Turkey, Ukraine, Chernobyl, Cuba, and Peru. Recently, I joined 13 other men on a deserted island with only the clothes on our backs and minimal survival tools to see if modern men can survive without basic necessities. Every week, I will be recapping episodes of The Island here at The Observer. Here we go!

In episode two: No , No Life, the 13 remaining men begin to fall apart. Truthfully, this one was hard for me to watch.

We need to survive, and at the top of the episode, we have only a few swigs left in the can.  Mistaking #seawater for fresh the previous day continues to weigh on the group. Our top priority is to locate a freshwater source.  Three groups break from camp to go in search of it.   Rick and Buck end up leaving for over a day.

Those of us back at camp are suffering the effects of 100 degree heat and sun exposure. You cannot imagine the effects of true dehydration until you have gone through it yourself.  I felt as though my body was made of lead.  My saliva was the consistency of thick glue.  Around me, the men are fading.  Dakota mentions he is light headed when he stands, and we all knew exactly how he felt.   At one point, I even fainted. Lifting my arms to shoot felt like I was expelling more energy than I could afford, but filming kept my mind occupied and focused, and I had a job to do.

Out of all the men, Mike is hurting the most.  He’s a big guy and has been going hard over the last several days, sacrificing a great deal of strength to support the group at large.  He spent much of Day 3 successfully spearing coconuts out of a tree, and even though none of us could have done what he did, he still called it “a team effort.” This is a man you want to have around in a survival situation.  He is good for morale, and he is by far the most talented (and only) spear thrower I have ever met.  Feeling the effects of dehydration, Mike needs to lie down; it’s getting hard for him to breathe.

Night falls on Day 3. Benji and Rob find vines in the jungle, and we spend much of the next morning trying to squeeze any sip of we can out of these stubborn vines. If you’ve never had a vine, it is a fairly simple process. First, you cut the bottom of a vine to separate it.  Then, hack away four or more feet above that first cut.  (Easier said than done, as some vines are very thick and require some significant swinging to bring down.)  A good vine has maybe a gulp of in it. Most vines are not good.

Meanwhile, on the other side of the island, Buck and Rick have continued intelligently on their quest for .  They conserve energy:  drinking coconut , taking time to rest, and scouring this precarious terrain for any sign of fresh . Miraculously, they find it.  Remember, they cannot drink that until it has been boiled.  They begin the long trek home.

Back at camp, there is still no sign of Buck and Rick and time feels like it is slowing down.  We try to lie in the shade as much as possible, but our reflexes are slow, and there is not a drop of spit left in my mouth.

Mike has no strength to hold the vines above his head and is now lying against a fallen tree log.  Frustrated with his body’s limitations and our dire situation, he begins to break down.  Our hero starts to show the pain he has been hiding these first four days.  Davion feels the need to advocate for Mike as he weakens.  (Davion is a hard-working firefighter/paramedic from Indianapolis, and crisis is his field of expertise.)  Davion demands we turn off the cameras as Mike tells Rob, “I don’t want my babies to see me like this.”  Rob grabs a camera, and he and Davion begin to try to delete the footage Benji, Matt, and I have been recording.

We are barely able to stop them from deleting the footage. Jim attempts to retrieve Mike’s knife, as now the dehydration has taken a toll on his judgment, and Jim fears this is a dangerous situation.   He keeps Dakota from giving Mike a vine to keep him out of harm’s way.

I grab another camera and keep filming.  It is one of the hardest moments I have had to face in my career.  I walk down the beach, and I plant a camera in the sand.  It is framed in a wide shot, showing the entire interaction with the group and the safety team as they come in.   The wide shot ensures that we will document what is happening while giving the situation as much space as possible.

Matt, Rick, Benji, and I were there to film the show.  In addition to telling the story, it was imperative to capture as much of what happened to everyone for the producers, the safety team, and the medical team to know what was happening to us.

I honestly can’t believe the next scene made it into the show, but I’m glad it did.  We debate the morality of filming a show in a situation like this. Davion explains his point of view as a medical professional, and I see his side of it…but in that moment I made the decision to hold the camera, and I still don’t know if it was the right one.

I would like to point out that Mike Rossini is one of the most charismatic and upstanding individuals I have ever met.   He suffered a very real loss when his wife lost her battle with breast cancer.  I can only imagine what it is like as a single father to contemplate leaving your children with no one to look after them in a situation where you elected to put yourself at risk.   We all did this show to see what we were made of, and Mike is a real hero. He did his best to take care of all of us, but it was way more important for him now to take care of himself and get back home to his daughters.

We call in the safety team, and Mike leaves The Island.

We feel more alone than ever before.

Buck and Rick return with , and there is a brief respite from the heaviness of the day.  With us all missing Mike, Trey asks what he would say if he were there.  Jud and Rob do their best Boston impressions of Mike,  and we all laugh for the first time in what seems like ages.  After we boil the and cool it in the ocean, we have our first real gulps of fresh .   Nothing tastes better.  Dakota calls it tea, and Earnest labels the brown liquid “lemonade. “

What would have happened if Buck and Rick had returned 30 minutes earlier with the ? Would it have been soon enough to save Mike? I don’t know.

Morale is low, but we don’t have time to sit there and feel sorry for ourselves.   Buck and Rick have given us what we needed most…but the source is a forty-five minute hike away, costing energy we don’t have to retrieve it.  While some of the men go back to the first source to make sure we have something to drink, Benji and I set off into the jungle to locate a closer source.

Heading back to where we had seen signs of fresh , mushrooms and green;  Benji and I locate a closer source.  There’s no time to celebrate.  Night is beginning to fall, and the looming tide begins to rise.  We decide to carry a load of down to the ocean and try to float the bottles back to camp. By this time, it is too dark to see in the jungle, so we decide our safest bet is trekking around the outside of The Island, where at least we know the way. We could not be more wrong.

As we begin to wade around the outskirts of The Island, the tide rises more quickly than we had anticipated. The ocean is at our necks.  Benji and I start to slam into the sharp lava rocks that ring the island. We pass the camera back and forth.   I slam the camera into a rock as I’m hit by another wave. The Canon x105 makes a heavy thud, and we both know that we’re going to need both hands if we’re going to make it out of this.  In the last seconds of the episode, we decide to leave the camera behind.  We take out the memory card, and the ocean reminds us she isn’t playing around.  My legs are bleeding, and the salty stings with every splash.  My heart is pounding, and I am more scared than I have ever been in my life. 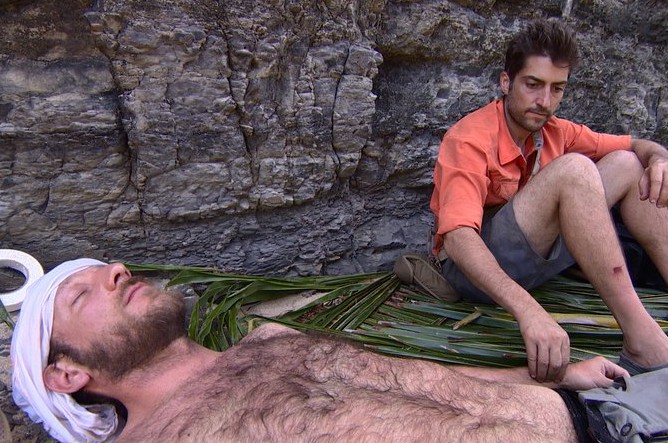