Hi, my name is Graham (@graham_sheldon) and I’m a member of the embedded crew on NBC’s brand new docu-series: The Island hosted by Bear Grylls. In my everyday life, I work as a director of photography and producer. In my career, I have produced a myriad of documentaries in countries like Turkey, Ukraine, Chernobyl, Cuba, and Peru. Recently, I joined 13 other men on a deserted island with only the clothes on our backs and minimal survival tools to see if modern men can survive without basic necessities. Every week, I will be recapping episodes of The Island here at The Observer. Here we go!

Where were we?  Right, Benji and I are exhausted, lying on the lava rocks, bleeding into an ocean laden with sharks, debating whether or not the camera is more important than our lives.  This is a choice made tougher by the fact both Benji and I make our living from filming TV and Film projects. Remember how Tom Hanks felt about Wilson?  It’s kind of like that. Throwing a camera away is a bit like throwing away an extension of us. We tell stories, and we use cameras to do it.

It hurts, but we decide that our health and safety is more of a priority in this moment and leave the camera and the we collected behind.  The rest of the camp waits for us, debating our whereabouts.  It takes us a very long hour and a half to wade back to camp, rising with every step.  (Luckily, for viewers, we make it home three minutes into the episode.) We come stumbling out of the darkness, feeling relieved to see the eight faces of our remaining brethren.

There are different stages of hunger from my point of view. In the early stages, you experience mild hunger: stomach growling, more of a nuisance than an obstacle. Next, there’s what I would label as intense hunger:  body empty, all you can think about is food and how much you miss it.  Surprisingly after that, you come to terms with your situation and enter acceptance hunger: the pangs of deprivation are now simply part of you, and you can ignore them. Every once and a while, the cramping gets to you, but eventually the body knows food is not imminent and stops bugging you about it.  If you are Dakota, however, you are hungry all the time, and it eats at you like fire ants feasting on Rick’s flesh.   (Little Island humor there for you.)

From a physiological perspective, we can survive without food for between 30 and 40 days. There have been extreme cases during hunger strikes where humans have survived even longer.  We, however, are your average American men, and we were not aware we were partaking in a hunger strike.

The group splits up to search for food.  We find limpets.

If you’ve never had a limpet, and chances are you haven’t, they are slimy shelled creatures, ranging from the size of a dime to that of a quarter…or if you’re really lucky, an ole timey half-dollar.  I think they taste pretty great, but other members of the group disagree — especially Jud. Jud hates limpets and describes them as “sand covered boogers.”  They weigh in at 20 calories apiece.

Davion has built a shelter, which he calls “Rock Camp.”   It is an Island Craftsman:  palm frond walls, sand floors, cliff adjacent. It is not comfortable, but it gives us something more important than comfort.  It feels like he carved out a little piece of home for us on this beach.

Rob is starting to have second thoughts about choosing to do the show. He worries he isn’t contributing anything of value to the group.

Several of us, including Davion and Dakota, get back to the search for limpets. Limpets have a tendency to cling to rocks on sharp and treacherous portions of the cliffs flanking our beach.  The rocks are covered in moss and are very slippery. I decide to wear flip-flops for some reason.  (I went shopping in the tidal trash piles around the beach and had previously found two my size.) Jud may hate them, but I actually developed a taste for limpets.  Those who know me know I really love food, and I was not about to anger the Island gods by poo-pooing the only sustenance we had.

While navigating limpet territory, we suddenly hear a cry of pain and run over to discover Davion, our medic, lying on his back. He has fallen onto the jagged rocks beneath him.  We try to get him to stand, but he can barely move. With danger of a spinal injury, it becomes clear we need to evacuate him.  We work together to get him onto a chopper.  Just like that, Davion disappears into the sky, and our group of 14 is down to 11. Rick sums up our shared dread, “This Island is eating people.”

I ask Dakota what he misses most. He answers, “Food.”  I immediately tease him about not saying his girlfriend. Dakota is the youngest of all of us at 22, and he is welcome comedic relief in this first week.  Dakota came to the island after dropping out of college and wants to make his girlfriend and family proud.  I think he already has.

Matt, Benji, Dakota, Jud, and Rob attempt to fish after repairing a net found on shore. They don’t have any luck, but we’re hopeful. Having a workable net has to count for something, right? I know nothing about fishing, but I remember playing Zelda: Ocarina of Time and the main character, Link, used nets and fishing poles. It didn’t seem difficult then. (I am aware my video game experience may not get me far in my current surroundings.)

We are still fishing with the net, and we are catching nothing. Trey is dreaming about cheeseburgers.

We see a stingray, and Dakota and I attempt to spear it. Dakota comes the closest but misses by a few inches.

Rob is still struggling, but he helps Benji and Dakota retrieve the Benji and I left behind at the beginning of the episode.  The route back is over the same lava rocks where Davion fell.  Traversing the site where we last lost one of our group is not appealing to anyone, but we need that .

Benji, Matt, and I check the net again to see if we have had any luck and are horrified to discover  we have captured an endangered sea turtle.  Matt frees the turtle and it slowly kicks away, but the current drags the turtle onto the sand, and it lay there nearly motionless.  This is not good.

We pour over our little friend’s head and gently nudge the turtle back into the ocean.  He’s still in rough shape, and now it looks like he’s not breathing.  Benji finally tries something out of the box:  he gives the sea turtle mouth to mouth.  Could this work?  Does my new giant friend (6’7”) really have his mouth on the lips of a turtle? We continue pouring salt over his head and shell.   Miraculously, Mr. Turtle raises his head.  It’s working!  Matt escorts the revived creature back into the .  Mr. Turtle breaks free from Matt’s hands and kicks out into the ocean. Incredible.  We are elated.  In a place where our environment seems to be picking us off one by one, levity is a precious commodity.

The episode ends with a fish in the net! It isn’t much, but that single mouthful of food puts a little pep back into our sandy steps.  Moreover, the fact we know we will be able to fish rejuvenates our spirits.

My good buddy over on the east coast, Steve Eheart, likened watching this show to watching a murder mystery. Tune in next week, and see if then there were none. 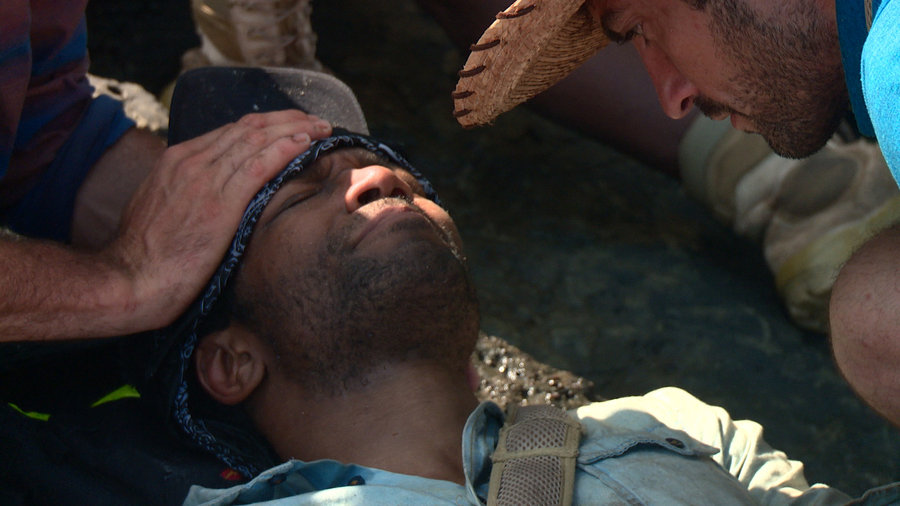