Things of Which I am Certain

It was August in the late 1990s, and I was in New York for a psychology conference. Having given my talk that morning, I was free to enjoy the remainder of my trip. In the late afternoon, I set out from my hotel in Times Square and walked to the Brooklyn Bridge, where I strolled under the great web of cables at sunset enjoying views of the East River, Brooklyn, and Manhattan. After completing a loop to the Brooklyn side and back, I made my way to Little Italy for dinner. It was a warm evening, and as darkness came to the city, I was happy to find a sidewalk table at a busy place offering southern Italian food.

I ordered my dinner and opened the book I brought along, My Own Country by Abraham Verghese, a physician’s memoir of the early years of the AIDS epidemic.

2. The events a few minutes later.

When I regained consciousness, I was sitting at a round table inside the restaurant. A woman of approximately my age was sitting across from me. She gave me the surprising news, but her quiet attentiveness put me at ease. She asked me a number of questions. I said I was in town for the conference and, as it turned out, she was a psychologist from California, here for the same reason. When I passed out, she left her dinner companion and came into the restaurant to attend to me. As we spoke, I understood that she was assessing my mental status, making certain that I was fully conscious and knew where I was and what was happening. As the waiter brought me a glass of , the woman asked if I was traveling with anyone — I wasn’t — and where I was staying. I refused offers of medical attention, but she urged me to return to my hotel room and rest. I agreed, and the waiter called a cab. She offered to accompany me on the ride, but I insisted I would be fine. She should return to her friend.

Eventually, I convinced her that I could make it back to my room safely, and she agreed to let me go. Then she leaned in to tell me one more thing: while I was unconscious, I had wet myself.

This was a rather delicate message to deliver, but it was done with great skill. I was a grown man with a PhD, and I had peed my pants. Furthermore, I was in a very public place, far from a shower and a change of clothes. I was embarrassed, but this woman, whom I had never met before, spoke to me with the soothing warmth and concern of a close friend. She just wanted me to be fully informed of my situation as I started my journey back to the hotel. I looked down at my shorts and saw that she was right.

When the taxi arrived, it pulled up directly in front of the restaurant, making my path a straight shot out the door and into the car. I thanked the woman and the waiter and, doing my best to cover the wet spot with my book, headed for the door under my own steam. When I hit the sidewalk, I did not look left or right at the diners who had witnessed my collapse but focused on the door handle straight ahead.

Things of Which I am Uncertain

Because I left the restaurant so soon after coming to, I never found out what happened while I was unconscious. What was the nature of my wilting? Did my face land in my plate? Did I fall to the ground or merely slump in my seat? Was there much commotion when I was discovered? How did I get from the sidewalk to the table inside the restaurant? Where had the woman been sitting? How had she come to be my attendant? In hindsight it seemed I’d missed all the best parts of the episode.

2. The cause of my fainting.

It was very warm. I’d had a full day, making a presentation at the conference and walking several miles in the heat of the city. However, I was in very good health, and these physical factors alone seemed insufficient to make me faint. The last thing I remember reading was a very difficult section of the memoir where Verghese describes a rather severe surgical procedure.

I have always believed the primary cause of my fainting was the passage I was reading. We humans have an enormous capacity for memory and association that gives language great emotional power. In my lectures on the classical conditioning of emotion, I often tell the story of reading a novel when I was in college. Of finishing the book, closing the cover, and not being able to move. I was so overcome by emotion that I sat for several minutes reverberating with unexpected feelings. And yet it was all make-believe, mere black spots on a white page. What remarkable power unleashed by a talented writer and an engaged reader. The book was Graham Greene’s The End of the Affair.

Years later, on a hot night at an Italian restaurant, black spots on a white page would knock me cold.

I had no way of contacting her in New York. She gave me her business card at the restaurant, but this was before the era of cell phones. I tried to locate her through the conference organizers but was unsuccessful. Knowing that she was still in New York, I called her office from my hotel room and left a message on the answering machine thanking her for what she had done. Unfortunately, I have since lost the business card, and I never heard from her again. But I have not forgotten, and I will always be grateful that, on a hot August night, a stranger took a few minutes out of her life to help me with mine. 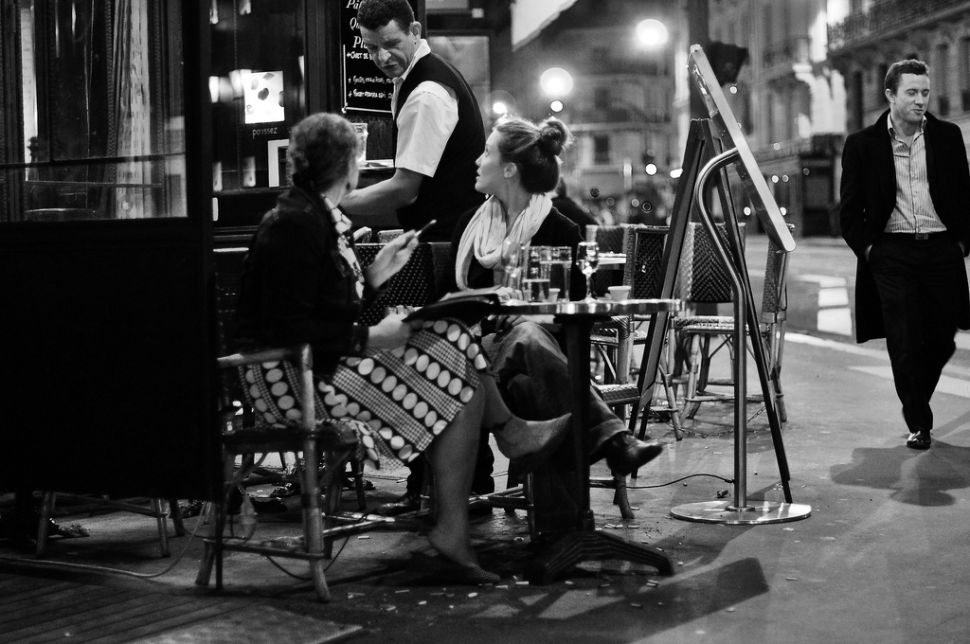