“Being alive is just so weird,” says the awkward, bony doofus Jordan Berman, played by the colorful, bouncy and enchanting actor Gideon Glick in Joshua Harmon’s touching and exuberant new Off-Broadway comedy Significant Other, directed by Trip Cullman and produced by the Roundabout at the Laura Pels Theatre on West 46 Street. This play, told through the hilarious and heartbreaking eyes of a lonely gay boy desperate to love and be loved and spinning into butter, proceeds to show in one funny, wise scene after another just how weird being alive can be when you’re living it all alone.

Actually, Significant Other is an ode to everyone looking for a timeshare in the space we all occupy when life moves faster than we do. In school, Jordan didn’t have any gay shoulders to lean on, so he had no choice but to tilt—into the arms of his three best gal pals Kiki, Laura and Vanessa, who tried to fix him up, through years of formative ups and downs, with Mr. Right. They held his hand, kicked away his clouds, discounted his losses, cheered his near-successes (close but no cigar) and shared everything but their bras. But as time passed, school morphed into jobs, career decisions and serious relationships, and all three grew up and, luckily, found their own Mr. Rights. Then the sharing ended, like the craving for pop tunes and pop tarts. And Jordan was still alone.

Sometimes he turned to his grandmother, a sweet source of comfort who grew tired of growing old and became preoccupied with ways to commit suicide with no pain to herself and no mess to clean up for the people left behind. And sometimes, Jordan just fell for the wrong guys—like a fellow office worker named Will, who repaid his attentions with indifference. But Jordan never found a mate, a pal, a chum, or any kind significant other. The three girls who gave him unconditional love through the years included him in their weddings, but he grew distant and estranged.

In the play’s best scene, he writes an email to Will pouring his heart out, despite howls of objection from his entire female support team. In the kind of hopscotching, forehead-thumping, soul-searching Saint Vitus dance that is Gideon Glick’s sailing, soaring, slumping, slurping hallmark, he struggles visibly with his dilemma, jumping and dancing and bouncing around his laptop, then finally jabs his finger on “Send.” The object of his tortured affection not only fails to respond, but moves away.

For most of Significant Other, when Jordan and his circle of girlfriends are tous ensemble, they bubble and squeak and jump up and down like Natalie Wood and her Kansas high school inner circle in Splendor in the Grass. The sadness comes when he’s alone and we finally see how depressed he is and realize those three gal pals are busy walking down the aisle to make a future with lives of their own. When he’s really desperate, all he can reach is their answering machines. Delight is leavened by emptiness, and we realize that behind all that banter and bravery lays a mortgaged heart.

Observed with tenderness and written with bittersweet honesty, Significant Other is a wonderful play about unrequited love, offered with warmth and without sentimentality. Everything changes and people move on to other phases, but for lonely spinsters and lost boys light in the loafers, love can be as corny but sincerely punishing as old song lyrics about blue moons and stars turning cold in the midnight sun.

Your heart beats in the same quarter time with Jordan’s whether he melts poetic after seeing Will’s body at the pool or spills out his fear of being abandoned on the highway of life, but you also want him to go away when he forgets how to pick up the pieces and make a positive move in the right direction, wrong direction, or any direction at all. But even if he fails, that’s all right, too, because Mr. Glick is a pleasure to be around any way we can get him. The playwright finds unique ways to articulate the architecture of his loss that are thrilling to hear and watch. I doubt if there is anyone who is unable to relate profoundly to the characters in this play, what they go through, and how they ache. It’s first-cabin theatre, all the way.

It’s always a delight to bask in the intelligent glow of veteran actress Barbara Barrie, and although the role of Jordan’s adored grandmother is really too small and unfulfilling for an artist of her depth and range, she fills it beautifully. She’s there to remind us that sooner or later we lose everything in life—to marriage, transit, or death. The three girls who play Kiki, Laura and Vanessa (Sas Goldberg, Lindsay Mendez and Carra Patteson, respectively) are evocatively shaped and markedly different from each other, each holding a separate key to Jordan’s hopes and dreams that never really unlocks the right door.

But it is Gideon Glick’s stage and he is not just housesitting. He establishes squatter’s rights immediately and lights up every corner or the proscenium. He’s so busy bouncing off the walls that you get dizzy watching him, but director Trip Cullman knows just how much rope to give him, always pulling in the reigns before he implodes. He’s lovable and exasperating. He embodies joy and sadness, within the same heartbeat. You don’t get that kind of acting every night in the theater, and you don’t get plays as rapt and poignant as Significant Other every day. It’s the summer season’s best surprise. 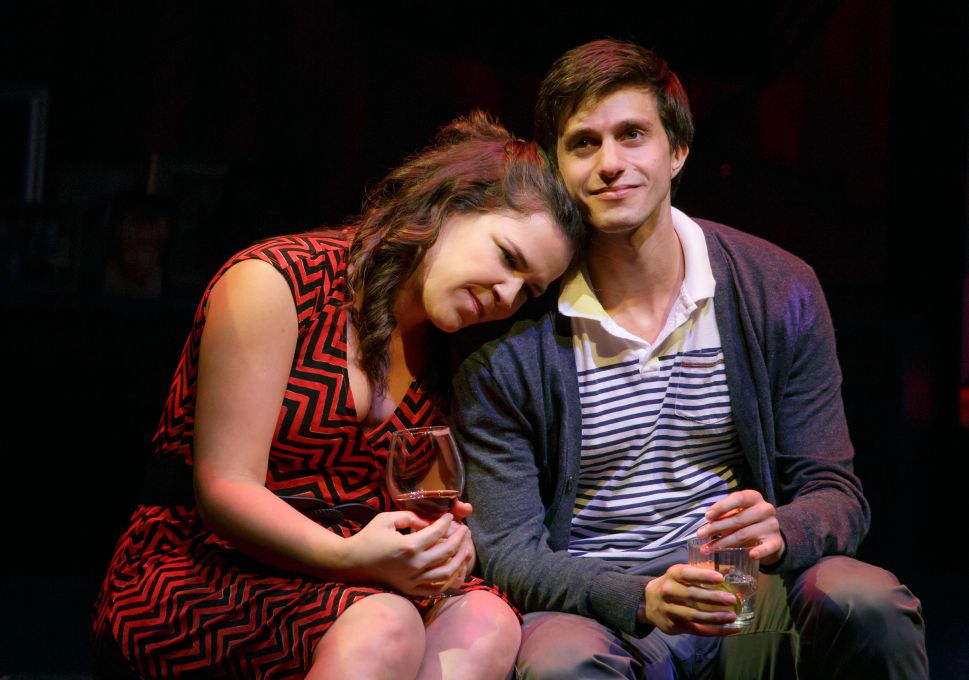