LIVINGSTON — Gov. Chris Christie may have been the subject of heated protests outside the gymnasium of Livingston High School where he formally launched a bid for president here today, but inside, among a crowd of cheering supporters that included the majority of the state’s GOP lawmakers, there was little question of allegiance.

The gushing began as soon as Christie’s mouth shut.

“It was great, man. It was smart, uplifting — you know, one of the things I keep saying about the governor is that he brings a message of leadership and a message of hope,” said Assemblyman Scott Rumana (R-40), the Republican Whip in the legislature’s lower house. “It very much reminds me, it’s very Regan-esque. It lifts up your spirit, and makes you feel that we can actually get ourselves back on the right track in our country.”

Christie officially declared a run for the Republican presidential nomination here this afternoon, promising to run a campaign based on a brand of honesty and forthrightness that he said would help make America “respected again.” He slammed what he characterized as the “weak and feckless” foreign policy of President Barack Obama, who he said “lives in his own world, not in our world.” And he vowed to “fight for the people of the United States,” using the skills he acquired both as governor and U.S. Attorney.

It was a shining moment for Christie as he continues to deal with the state’s ongoing fiscal problems — including repeated credit downgrading, a broken pension and benefit system, and a below-average unemployment rate — and one that, at least according to comments made by those in attendance, reaffirmed his stature among the state’s GOP.

“Look, he reminded us of his humbling beginnings, his family’s humble beginnings, and set out a vision that I think everyone can embrace, recognizing, especially in New Jersey, the multiculturalism we have here, and how unique we are in the country. We really are the melting pot in the nation,” said state Senator Jennifer Beck (R-11), her caucus’ Deputy Conference Leader.

“You know, I think this is exactly what the country is looking for. They’re looking for someone who is going to tell it like it is, and I think the governor has a record of doing that. I think sometimes people don’t always appreciate his frankness, but that type of leadership is difficult. And I think that’s why he’s risen to the position that he’s in, because he takes those difficult positions and he stands by them,” added Assemblyman Tony Bucco (R-25), who exited the building with his father, state Senator Tony Bucco (R-25).

Christie announced his presidential leadership team shortly after leaving the event, a sprawling list of Republican officials that includes lawmakers on both the federal and state level. The latter group included Senate Minority Leader Thomas H. Kean, Jr. (R-21), with whom Christie has had a rocky relationship in recent years, but predictably did not include state Senator Joe Kyrillos (R-13), another ranking Republican who earlier this year pledged allegiance to former Florida Governor and presidential candidate Jeb Bush.

“I think this is what the people are looking for in this country. We see what’s happening in Washington, we see what’s happening in local governments, there doesn’t seem to be any cooperation, no compromise. And I think that’s what we need — my definition of politics is the art of compromise, and I think that’s what he brings to the table,” Bucco, Sr., said.

Still, Christie will face an uphill battle in the coming weeks, both in the state, where a Democratic-controlled legislature and public sector unions have stonewalled his attempts at further reforming the pension system, and nationally, where his polling numbers among likely Republican voters have dwindled. Those two challenges are not unrelated, experts note, as Christie’s success in a crowded GOP field will likely depend on his ability to present an unblemished and uncompromisingly conservative record to voters.

Bucco suggested Christie’s crises at home were not of his own doing, but of Democrats’ in Trenton.

“You have to think about the environment that he has to operate in everyday. The Democratic majority in both the Assembly and Senate. And the administration, in his first term, we did a lot of great things — we capped property taxes, we went through a lot of reforms. All of those things have helped make New Jersey more affordable,” Bucco said. “But as he became more and more popular, I think Democrats started to play stall ball. They said hey, we can’t give this guy anymore wins, because look where he’s at.”

That stalemate — between Christie and the majority party in Trenton — became most recently apparent this month, when Democrats put up a $35.3 billion budget funded by millionaires and corporate tax hikes, only to be shot down by the Republican, who ultimately passed a vastly pared-down $33.8 spending plan for the coming fiscal year. It was largely a repeat of last year’s budget negotiations, when Democrats passed a similar budget and Christie vetoed it.

But Bucco said the ball has always been in Democrats court.

“Look, we can’t get nominations through, we can’t get supreme court justice, no matter where it is, it’s another stall,” he said. “The other side of the aisle is afraid of this governor, because he’s articulate, he’s charismatic, and he’s the kind of guy who could really turn this thing around.”

“The message was optimistic and positive, and the American people want a true leader in the White House,” Lance said. “He is a conservative, he has governed as a conservative, he has had the ability to reach across the aisle in the legislature in this state, controlled heavily by the Democratic party. I predict he will do very well at the first debate in Cleveland. This will be his first opportunity to introduce himself to the American people as a whole. And I think what you saw today is an example of how he well stand out in a positive fashion during that debate.” 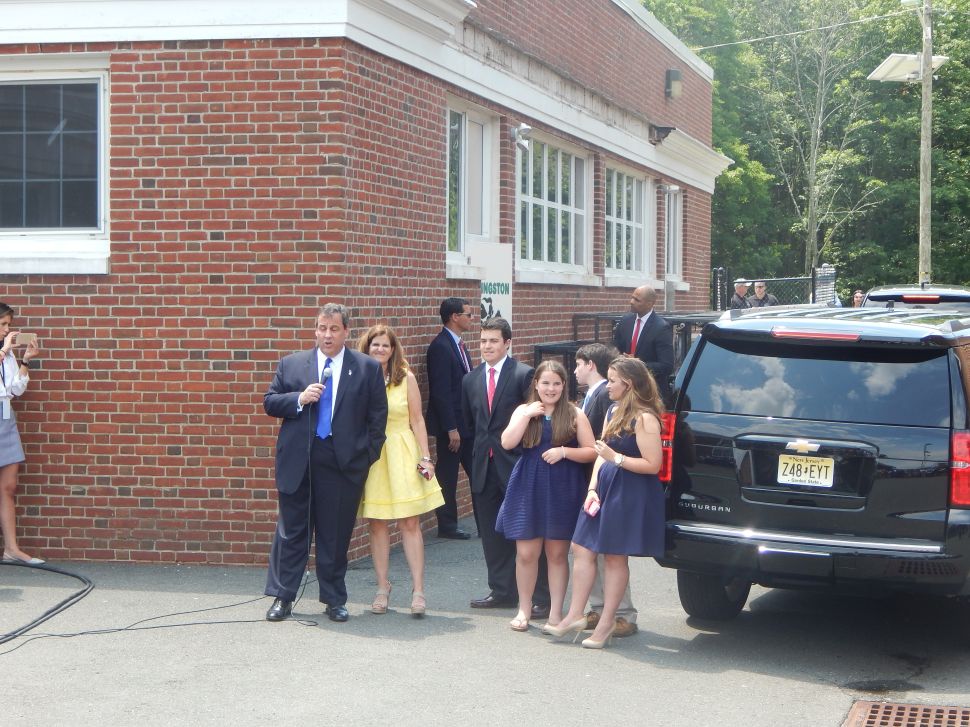