On a recent weeknight, a cheerful young woman in a red “TodayTix” T-shirt stood outside the entrance of the Walter Kerr Theatre, home of A Gentleman’s Guide to Love & Murder, holding 21 envelopes of Broadway tickets.

Theatergoers picking up tickets from her—and not from the box office—included Amrita Chatterjee, a CUNY biology grad student born in Kolkata, India, who had ordered the tickets on her phone and was seeing her first Broadway show. Charles Zarrell, an information technology project manager, retrieved a pair in the balcony. “My daughter who works at BuzzFeed told me this is a great application,” he said, of the app TodayTix. For each ticket, he paid $35 plus $10 commission. That’s cheaper than Telecharge, which generally adds a $9.50 service charge per ticket and a $2.75-an-order handling charge.

He’s happy with his purchase, but the theater industry isn’t so sure.

These days, type “Broadway tickets” in a web browser and it’s easy to get confused. Broadway.com and Cheaptickets.com may pop up first. Both are resellers and Broadway.com, for example, charges 35 percent commissions, presumably to tourists who don’t know better. The primary outlets, Telecharge and Ticketmaster, are next. But while Telecharge and Ticketmaster sport relatively reasonable fees, they’re slow and clumsy online, particularly when searching among different dates and shows. And when it comes to choosing seats on the two sites, customers sometimes have to type in security codes over and over again to view each set of available options.

Credit card companies, such as American Express, offer “preferred” tickets that are often pricier than regular ones and sometimes better seats. On the other end of the spectrum, for discounted tickets, one usually need go elsewhere, such as Playbill.com, or to the city’s three wait-in-line TKTS booths.

Even experts and insiders concede it is confusing. “With the Internet bombarding us with information, it has become an issue of buyer beware,” said Scott Mallalieu, president of the group sales agency GreatWhiteWay.com. “You need to know where you get your tickets from and whether you’re getting the best price possible.”

To further complicate matters on Broadway, it is now standard practice to raise and lower prices regularly in response to demand, so-called “dynamic pricing” that makes buying play tickets more like buying airline seats and creates a top-tier of crazily expensive premium seats.

Premium tickets started with The Producers in 2001 and are now ubiquitous. The upside can be last-minute availability. Lincoln Center Theater’s hit revival of The King and I still has prime seats for many performances—at $325 apiece. “If you go on Telecharge or Ticketmaster, you can get premium tickets for any show on Broadway,” said Mr. Mallalieu. “But you’ll pay a premium price.”

Merritt Baer, 30, and Brian Fenty, 29, saw opportunity in this morass. They met as teenagers at the French Woods performing arts summer camp upstate and after working in finance and producing aimed to capitalize on two trends: the accelerating use of mobile devices and the increasing tendency of theatergoers to buy last-minute. Their three-year-old company, TodayTix, has a mobile app for buying full-price and discount theater seats within a week of a performance.

“It really is revolutionary,” said Andrew Hamingson, the executive director of St. Ann’s Warehouse in Dumbo, which has sold tickets through TodayTix. “People are on the go all the time and they don’t want to be tied down to their PC.”

In the view of Michael Taustine, a blogger and box office treasurer at the Shubert’s Lyceum Theatre, by highlighting its best prices for shows, TodayTix hurts the industry. “How is this helping Broadway if they’re moving people to lower-priced seats?” When customers seek inexpensive balcony seats at his box office, he said that he tries to “upsell” them, noting that the balcony is 79 steps up. “We will advise them what they’re buying and what other options we have,” he said. (Mr. Taustine stressed that he was speaking for himself, not his employer.)

TodayTix, which claims to handle 3 percent of Broadway sales, has its challenges. After receiving a Broadway order electronically, it physically sends someone to the box office, sometimes with a publicly available discount code. That adds to company expenses and makes it impossible for customers to select seats because TodayTix doesn’t know what’s available until it fulfills an order.

“Our goal is to work with everyone in the industry,” Mr. Fenty said. “The theater owners have been the slowest to come around.” Executives at the theater chains declined to comment or didn’t return calls. Telecharge, for example, is owned by its biggest client—the Shubert Organization, Broadway’s largest landlord. For the Shuberts, cooperating with a potential competitor may not be appealing.

TodayTix said less than half of its sales are discounts. Off-Broadway, it routes orders directly to venues and has sold tickets to the Public Theater’s shows, distributed freebies for every seat at last season’s first previews and ran a popular digital lottery for its hits Grounded and Hamilton. The company helped “reach the millennial demographic with a new distribution channel for us,” said Tom McCann, the Public’s senior director of marketing. TodayTix is handling a lottery for a pair of tickets for each performance of free Shakespeare in the Park and does another for $32 tickets at Broadway’s Fun Home. “They made a compelling argument that it wouldn’t just reach the people who show up at that performance,” producer Barbara Whitman said.

While critical of TodayTix, Mr. Taustine praises its ease of use and said Telecharge and Ticketmaster must raise their game. “It turns out people want an easy experience,” he said. 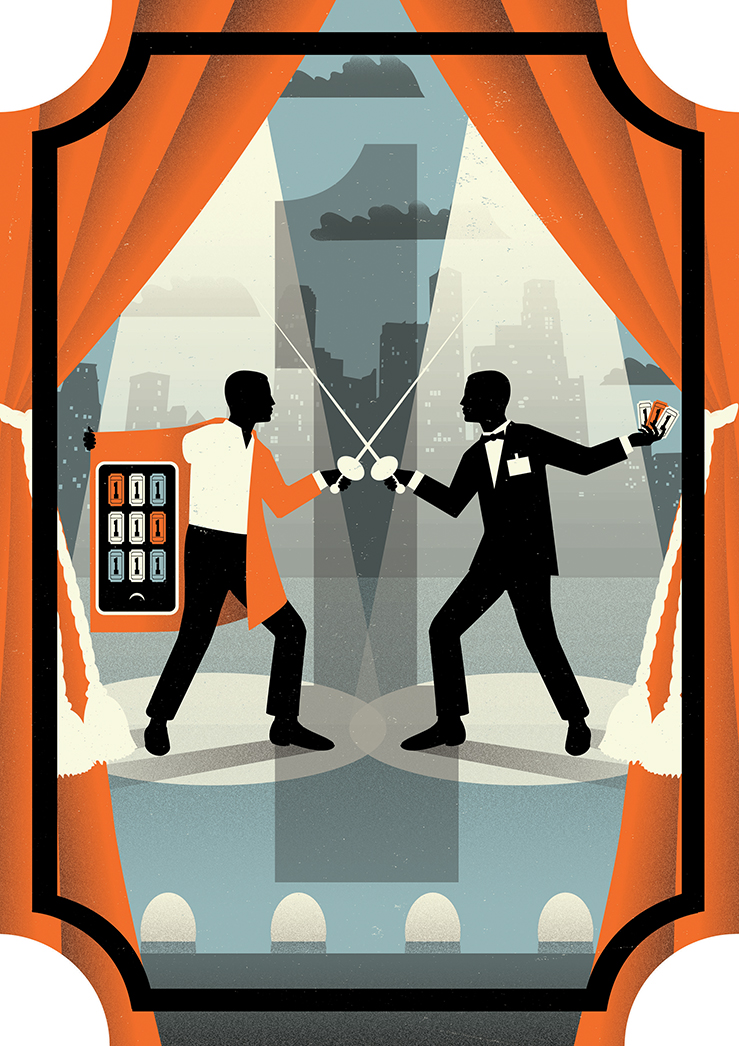