When Robb Reidel first moved to New York from New Hampshire in 1996, he recalls passing a sign for an open house in the West Village. “The listing was for a studio and the price was $90,000,” says Mr. Reidel. While the price tag seemed pretty steep at the time for the then-22-year-old, the idea of leaving the two-bedroom walkup he shared with a roommate for a one-room box was unthinkable. “I remember wondering, ‘Who would pay that much for a studio?’”

The conventional wisdom has it that people who lived in studio apartments do so out of necessity. They are new to the market or recent college grads who cobbled together loans from relatives to take their first steps on the property ladder or well-heeled suburbanites who want a toehold in Manhattan to use as a pied-à-terre. Anyone who no longer marks time by the semester and lived in a studio treats it like a slightly sordid secret—the admission of which is always accompanied by a lengthy explanation. They never just live in a studio, they live in a studio but…

…it’s right across from the park.

…it has fantastic views.

…the amenities are to-die-for.

But do these attitudes still hold true today when a studio without the bells and whistles can cost a half million dollars, and those in high-end, amenity-rich buildings like the Armani-designed 20 Pine Street, with its lap pool, billiards room and golf simulator, can fetch upwards of $1 million? Jeffrey Silverstein, a broker at Douglas Elliman, says it depends. “For people who are buying in newer buildings where the price point could be one or two million for a studio, there’s no stigma at all,” he says.

‘I still have that feeling of wanting to explain that it’s a studio but it has a dressing room, separate kitchen and space for a dining room table. It’s kind of like when I tell people I’m from New Jersey—the nice part.’—studio owner Michael Malvasio

But Mr. Silverstein found out firsthand just how real the studio stigma is for everyone else three years ago when his kids went away to school and he decided to scale back. “Buying a studio was a conscious decision to save money but it felt totally awkward,” he says. “My kids were living in bigger rooms in school than I was.” And whenever he mentioned his apartment, the description usually came with a string of qualifiers: “It was a studio, but in a great Union Square location, in a prewar building with the closets of a two-bedroom apartment.” Mr. Silverstein recently sold his studio and bought a bigger apartment in the same building. “I’m happy,” he says. “I’m like an adult again.”

Even some first-time buyers admit to feeling the need to justify their studio apartment to others. “I used to live with a roommate in a two-bedroom in Hell’s Kitchen before I bought my studio on the Upper West Side,” says Michael Malvasio, 27, a luxury brand marketing professional. “Even though I have way more space now than I did then, I still have that feeling of wanting to explain that it’s a studio but it has a dressing room, separate kitchen and space for a dining room table. It’s kind of like when I tell people I’m from New Jersey—the nice part.”

But today, many who feel they’ve reached a position where they should move up from a studio are coming face to face with the hard truth—they still can’t afford it. While studios have appreciated over the past decade—the average price rose 29.3 percent between 2005 and 2014—the jump from purchasing a studio to buying a one-bedroom has leaped by a whopping 160 percent in the last 25 years, according to real estate analyst Jonathan Miller of Miller Samuel. Meanwhile, there are relatively few new studios coming to the market. “As developers have skewed towards larger units, studios are just not being built,” Mr. Miller explains.

David Gomez Pearlberg of Town Residential says he has a handful of clients looking specifically for studios. “One client isn’t interested in amenities, he just wants a great space with lots of light,” says Mr. Pearlberg. “But for those who do want amenities it’s a challenge, because there are so few studios being put in new developments. It has to usually be an older building that is being renovated and converted.”

For now, studio apartments aren’t exactly scarce—they have remained a small but steady sector of the market in the last decade, hovering around 14 to 15 percent—but there are signs that even they may soon be harder to come by. From April 2014 to April 2015, inventory of studios has dropped more than 6 percent, compared to a decrease of about 2.5 percent in one-bedrooms.

Still, “think of studios as fixed housing stock,” says Mr. Miller. Fixed stock that is becoming less of a bargain. “In the more-expensive neighborhoods that have a lot smaller apartments, like Greenwich Village, we’re seeing the price per foot for studios be higher than for a one-bedroom,” he says. “Apartments selling for $100 million may make the news but they represent just a sliver of the market. The real price pressure is at the lower end.”

That pressure has disrupted the traditional cycle of recent grads living in studios for a few years before trading up as they progress in their career. Those who live in studios are staying in them longer and learning to make their peace with it and those newly entering the market, regardless of their age and status, are becoming more open to the idea of living in a studio.

That doesn’t surprise Jennifer Roberts, a broker with Halstead. “There are still customers who say I’ll buy the studio now and upgrade to a one-bedroom later,” she said. “But I’ve been getting more customers looking specifically for studios rather than settling for one.”

Those specifically looking for a studio today are choosing to focus on the building amenities and other extras, rather than on the living space itself. “I have one buyer who’s adamant that she wants either a private outdoor space or a roof deck and she’s willing to live in a studio if it means getting that space,” said Ms. Roberts.

And it’s not just outdoor space and views that will move someone to reconsider taking a studio, said Neeta Mulgaoker, a broker with Mirador Real Estate who deals mostly with rentals. “Empty nesters and people renting pied-à-terres have the same requirements as a new college grad or bachelor,” she noted. “If there’s a Trader Joe’s or a Whole Foods across the street it’s like a gold mine to them.”

And how do foreign buyers figure into the studio equation? Platinum Properties president Daniel Hedaya says studios can be attractive to investors. “Studios often will give you the best rental investment considering that they usually rent for a higher price per square foot,” he said. But Mr. Hedaya adds that foreigners looking to occupy a property even part time as a pied-a-terre or secondary home “are usually looking for a bigger [unit].”

For Cynthia Schwartz, a retiree from New Jersey, being near the action sold her on a studio pied-à-terre in the Ardsley. “My husband and I are avid tennis players and when we saw that it was directly across from courts in Central Park I said to my husband, ‘This is it,’ ” she said. The 67-year-old took further advantage of her location when she began taking dance classes at the 92nd Street Y, a short walk away. “I danced when I was younger and was thrilled to be able to take classes again even after all these years,” she recalled. Friends, many of which had begun buying homes in Florida, couldn’t believe that Ms. Schwartz was spending four to five nights a week in the studio. “When people would say, slightly aghast, ‘You live in a studio?’ I always think, ‘Well, you don’t dance,’ ” she said.

Kristen Kavanaugh, a 55-year-old professional baker rented out her 22,000-square-foot, four-bedroom home in Marin County, Calif., and traded it for a 600-square-foot studio in Gramercy after initially looking for a one-bedroom. “I had a budget of under $3,000 a month and my only requirement was a modest kitchen and good light,” she said. “We looked at several places until we came upon a studio. It never occurred to me that living in a studio would come with any kind of stigma,” says Ms. Kavanaugh. “Getting ourselves across the country and finding work was enough and I don’t need to make any apologies for it.”

Also not making apologies is Robb Reidel. Seven years after he wondered why anyone would live in such a small space, he plunked down almost triple that amount for a 425-square-foot studio in Hell’s Kitchen that faced a construction site. “Some people think of a studio as just a starter apartment, and I’ve been lucky enough that I’ve progressed in my career where I could afford more,” says Mr. Reidel, 41. “But here it is 12 years later and I’m perfectly happy. At this point I could get something bigger but I don’t really feel like I need to.” 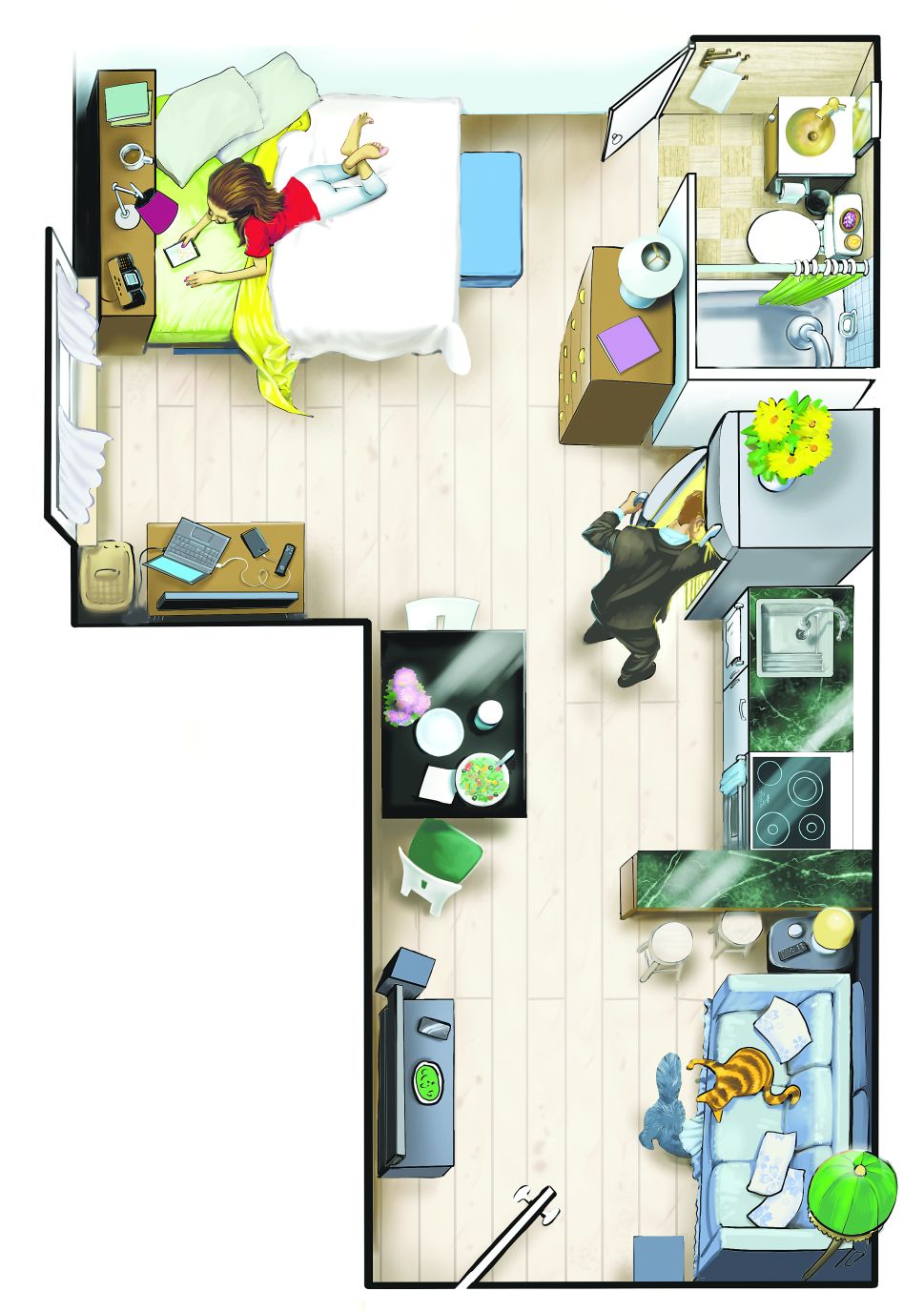