Tbilisi, Georgia—The recent flood in Tbilisi, the capital of Georgia, drew international attention mostly because the flood destroyed the Tbilisi Zoo. Images of a hippopotamus looking dazed after being tranquilized in the middle of a big city, frightened bears seeking safety or dead animals have been shown around the world. For the first hours after the flooding, residents of Tbilisi had to be on the lookout for lions and tigers in the streets. On my way back to write this article at the apartment where I am staying near downtown Tbilisi, my host texted me to tell me to take a taxi as a tiger had been spotted near the pubic square next to their apartment. One Georgian politician told me, only half in jest, that the city should make the hippopotamus its new mascot. Many in Georgia are indeed dismayed at seeing their zoo destroyed. I took my own children there many years ago when they were younger and we lived in Tbilisi, but the strange story and compelling visuals of animals should not obscure the human dimension of this tragedy as some have already lost their lives and many others have lost their homes or place of work.

This flood, like many natural disasters, set off a spate of accusations. The current government blamed its predecessors for cutting corners on infrastructure and developing a new highway that made flooding like this more likely. The previous government has, in turn, accused the current government of politicizing a tragedy while dragging their feet in the recovery efforts.

Shorena Shaverdashvili the publisher of the Georgian magazine Liberali and an astute observer of politics in Georgia described the political bickering. “Political accusations go both ways, of course. Georgian Dream (the current ruling coalition) says the flood was due to the construction of the new road by the United National Movement (the previous ruling coalition) and excessive construction permits along the Vere river… and UNM tries to critically focus on how the government is handling the crises, avoiding the background.”

The politicians are not the only ones getting into the act. Ilia II, patriarch of the Georgian Orthodox Church and one of the most influential and respected people in the country has channeled his inner Pat Robertson and described the flood as God’s punishment of the Communists, who have not ruled Georgia for almost a quarter of a century.

“When the Communists came to Georgia and began the persecution of Christians and clergy, and to destroy churches and monasteries, was written decree, to monasteries and churches, the bells, melted them and the money was founded the zoo…The zoo was founded at the expense of the bells of churches and monasteries, so this zoo is not accustomed. The zoo needs to close and establish a zoo in another place, as this is built on sin. Sin goes unpunished. Sorry that the Georgians are so fallen that due to the Church bells and their destruction founded the zoo. Here is the result. Killed people and destroyed animals.”

The provenance of the flood, and questions of whether or not the government responded quickly enough notwithstanding, Tbilisi’s mayor, David Narmania, summarized the city’s response on Tuesday afternoon.

“Rescue efforts were mobilized immediately after the information on the catastrophe was received. Emergency services of Georgia reacted swiftly as a result of which many people were rescued while escaped wild animals were contained. However many people are still missing and search operation continues even now. The country’s population got actively involved in relief efforts, tens of thousands of volunteers gathered within hours after the flood and removal of mud and debris from major roads also commenced quite soon after the flood. Within two days major roads of Tbilisi were cleaned while intensive work continues on restoring natural gas and pipes, electricity grids as well repairing roads and other kind of infrastructure.”

The Georgian people, as the Mayor indicated, have responded admirably. Thousands of volunteers have come to Tbilisi to help with the recovery. They have shoveled mud and raised money to help the victims of the flood. One volunteer, Giorgi Lobzhanidze, a 20-year-old student at the Georgian-American University, described the volunteer work as, “Our main mission now is to clean the flooded places that are full of mud and debris. I’m working at Mziuri park. In the beginning there was no supervising, so because of that the volunteers were a little bit unorganized … We made a chain of people and were passing the branches that blocked the way for heavy equipment.”

The US, one of Georgia’s most significant allies, has pledged support. Richard Norland, the US Ambassador to Georgia told me in an email on Tuesday, “we have been shocked at the intensity of the flooding and the loss of life; I visited the disaster zone today with the Foreign Minister and reiterated our commitment to help—it is hard for Americans to fathom how much a simple message of support can mean to our friends at a time like this.”

The flood has come at the beginning of summer, a time when Georgia is usually better known for beautiful weather, delicious seasonal fruit and a vibrant outdoor cafe culture in Tbilisi. For a poor country like Georgia, this also means critical revenue from tourists, but now that is threatened as some roads and houses are damaged and the rebuilding is just beginning.

Levan Berulava, the general manager of Rooms Hotel, one of Tbilisi’s newest and hippest hotels, however, sounded an optimistic note. “I don’t think this will have a long term effect (on tourism) since the public and private sector is mobilized and all efforts are being made to bring everything back to normal as soon as possible…Hopefully all will be get back to normal very soon and this terrible tragedy won’t happen again.” Mr. Berulava also noted that his staff has been helping with the volunteer effort and the company that owns his hotel had contributed to the funds to help the victims of the floods.

Georgia has gone through a lot in recent years. Just short of seven years ago, Russia, in a precursor to what we have seen in Ukraine in recent months, invaded Georgia; from 2010-2012 the country had a period of political tumult and constant low lever crises from which it has only recently begun to recover; and the economy has been persistently stagnant with high inflation and unemployment for years. Over the next months, the political roots of this disaster, and its relationship to climate change, may become more clear, but for now, the best of Georgia is on display not in the good wine, abundant produce or Black Sea resorts, but in the volunteers who are coming together to help rebuild their city. 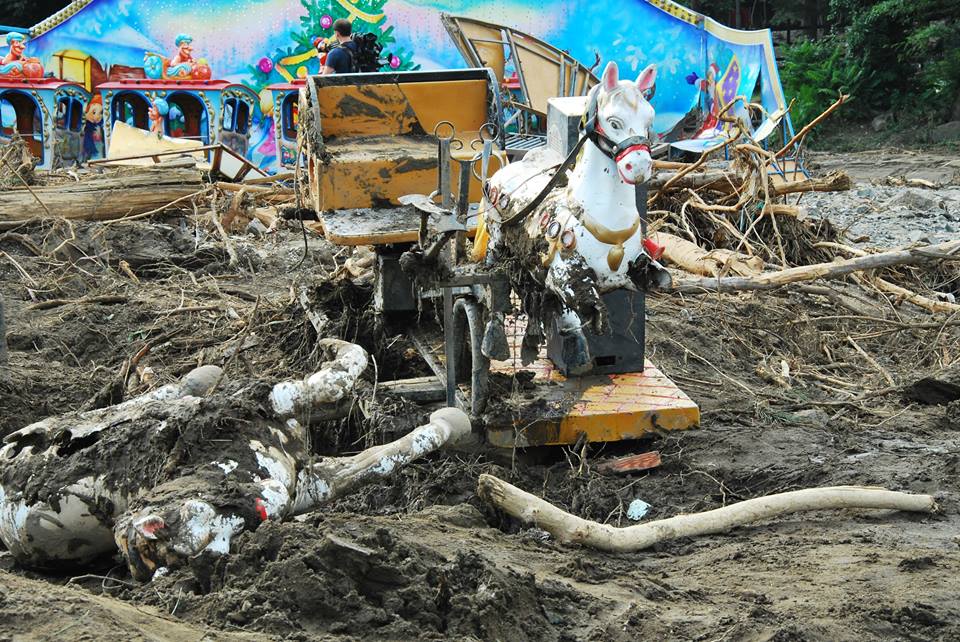