A few years ago, the great minds of Netflix were stumped. Their recommendation engine could not correctly predict whether viewers who enjoyed this or that film would also enjoy Napoleon Dynamite. With its odd rhythms and (to me) richly weird characters, it was a rare movie that achieved a middling review not because most viewers found it meh but because all viewers either gave it zero or four stars.

There are many who laud him for the outrageously generous donations he’s made on behalf of the arts and medical research. And there are many others who consider the eye-popping sums he and his brother have contributed to political candidates and political action committees to have coarsened the nation’s political dialog and maybe even corroded the whole damn system.

And then there’s this guy. Niels Jorgenson.

“I have leukemia from being down there on the pile. What I have is very, very rare and 20 years ago was a death sentence, and now thankfully it’s long-term remission if they get it in the beginning. So I saw how they were lambasting Mr. Koch in the media and I was a little bit upset. I just wanted to send an old-school handwritten note just to say, ‘Sir, I’m a survivor. I’m one of unfortunately many now. We have a thousand guys sick and I just wanted to say thank you.'”

“I got sick the end of ’11 and I’m retired since 2012. I wrote a handwritten letter to Wichita Kansas. I knew he was a New York man but the only correspondence I could find was to Wichita headquarters, and they probably thought I was a kid writing a project for third grade from my return address. I just explained who I was and that I had recently been through a bunch of cancer treatments that were very cutting edge and I wanted to thank him. I heard from his person shortly thereafter and I was kind of shocked, and I just said I’m not looking for anything but a chance to thank the man. So I never in my longest dreams expected to actually get to thank him personally.”

But that’s what happened. Lieutenant Jorgenson was invited to the unveiling of the David H. Koch Center for Cancer Care at Memorial Sloan-Kettering Cancer Center. The billionaire industrialist, a phrase used unanimously by both detractors and fans, has given a staggering $225 million toward his oft-stated goal of “curing cancer in my lifetime.”

After showing the boringest video ever made—you’d think $225 million would get you something that looks like it surpassed iMovie circa 1999, or at least a voiceover—Mr. Koch addressed the small room. He has an awkward speaking style that doesn’t conjure either the great Satan who singlehandedly unraveled labor relations in Wisconsin or the princely knight whose 8- and 9-figure gifts rescued Lincoln Center, the Met, and even WGBH. After he speaks, a few people shake his hand and he takes his seat, no gaggle of sycophants or desperate pleas to consider funding other worthy causes.

Even his statement to the Observer is oddly disembodied.

“It is wonderfully gratifying to know that cancer research is yielding life saving results as is the case with Niels. I am thankful for his service to our city during its darkest days following September 11th and I hope he lives a long and healthy life cancer free.”

Yep, he hopes a firefighter who rescued the city doesn’t die of cancer. C’mon, Mr. Koch, you gotta give us something more than that! “My passion in life is to help find a cure for cancer so others like Niels can enjoy life,” adds David H. Koch, the man responsible for both Americans for Prosperity and the greatest disposable paper product in history, Vanity Fair napkins.

Mr. Jorgenson said a year after he sent his note he got a call.

“’Do you have a few minutes for a phone call?’ And I said, ‘Yeah, I’m free.’ She goes, “Okay, hold on, Mr. Koch would like to talk to you.’ I expected this Donald Trump-type man because of his status and he was just so friendly and warm. I was really taken aback. I just basically conveyed to him that thanks to him and some of his associates who contribute, there’s guys like myself walking around and enjoying our kids.”

The details of Mr. Jorgenson’s cancer are a fascinating side story to the attacks of September 11, which continue to add to the murder rolls 14 years later.

According to Mr. Jorgenson, who like a lot of cancer patients has devoted the years since his diagnosis to developing expertise in his particular strain, “There are up to 50 different leukemias. The one I have—fortunately or unfortunately depending on how you look at it—is the most rare. There’s only 500 cases in all of North America here. And I was the seventh rescuer in six months to come down with this exact one, so that’s … statistically impossible [unless caused by the pile]. So what I received was called a Cladribine beam protocol that’s like 2½ years of chemo compressed into seven days. This was in ’11 and it brutal. I was eating 20,000 calories a day trying to stay ahead of the muscle waste and the bone waste and I still lost 40 pounds. It was crazy. Thankfully, I had an oncologist that was trained at Memorial Sloan Kettering and it’s one of those things where with this particular leukemia it’s a one and only shot and it’s a one and only treatment and its vicious. They more or less burn your bone marrow out of your body, and the way they conveyed it to me was that it’s like a forest. It’s a mass of forest fire that goes through your body, but the seedling trees are underneath the soil already to sprout. And then after the seven-day protocol they just more or less wash you out with saline. Now you’re left with no bone marrow whatsoever. You have to go into isolation for six weeks. One infection and you will die. If God willing if your own marrow regenerates you’re in remission and they can’t really tell you how long your remission will be.”

The Netflix researchers concluded that there was no point in trying to persuade people who hated Napoleon Dynamite to love it or vice versa. The same goes for David Koch, and he seems pretty okay with people venerating him and despising him based on the organizations he supports. There are even those who won’t wipe their tushes with Quilted Northern but can’t help sneaking in to witness something wonderful at American Ballet Theater. They’re conflicted.

Not Niels Jorgenson. As a New Yorker who did as all his brothers did—run toward the most dangerous fire in the world and stay there day after day—David Koch gets four stars. 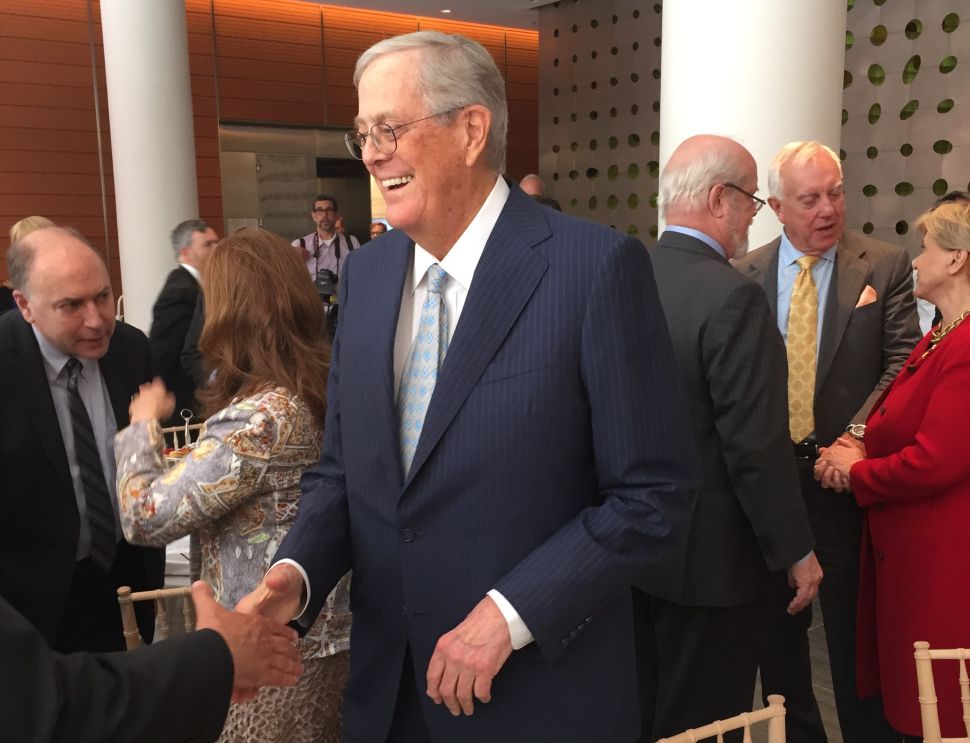