This was a very strange and eventful week for the internet. We said goodbye to one of the greatest movie villains of all time, got hyped for Andy Dwyer vs. the dinosaurs and giggled over a cat wearing a crop top. Yeah, things got a little weird. Here’s what excited the internet this week.

Christopher Lee, the legendary British actor who played Saruman in the Lord of the Rings and Hobbit movies passed away at the age of 93. With such a long and storied career, he was beloved by people of all ages. The internet mourned his loss by remembering the roles, quotes and stories that made him just about the most badass human being on earth.

And just to make sure everyone understood what a truly awesome human being this guy was, this image was shared all across Twitter and Tumblr.

(via queensabrinabeatriz)
Because here’s the cool thing about Christopher Lee facts: They’re all actually true.

Reddit has started slowly (very slowly) taking down certain subreddits in an effort to combat harassment. The site’s administrators published an announcement on Thursday, explaining that the aim is to prevent people from using Reddit as a platform to harass others. The biggest subreddit to be banned was r/fatpeoplehate. You can probably guess what went on there. Redditors reacted exactly the way you’d expect them to, which is to say, not well.

Many people on Twitter are just enjoying the temper tantrum from a safe distance.

Last month, President Obama joined Twitter and now, the woman who wants his job has joined one of those social networks all the kids are into these days. So far, she isn’t half bad at it. This was her first post:

It’s a light, fun first Instagram that lets the former secretary of state laugh at herself a little. Though I have to ask, where’s the red, white AND blue pantsuit, Hillary? I thought this was AMERICA! The photo has so far gotten 25.3 thousand likes and 5,715 people have commented.

Others not so much:

This one is adorable. #hatchkids is an ongoing series that asks kids to talk issues and events impacting the world. Here, they show each kid a photo of Bruce Jenner from the Olympics, followed by a more recent photo of Caitlyn Jenner. The kids are asked to describe each photo before being told that they are of the same person. Their reactions are sweet, hilarious and might give you some hope for the future. Watch for the blond kid’s reaction at 0:48.

The movie didn’t come out until Thursday night, but Twitter and Tumblr were frothing with anticipation all week. Because seriously, you have Star-Lord fighting a bunch of prehistoric monsters. How is that movie not going to be amazing?

Of course we all know that if Chris Pratt ever did come up against a prehistoric hoard, this is almost definitely what would happen.

Let’s end the week on a happy note with possibly the greatest image ever posted on Amazon.com. On April 11, a woman posted this review on Amazon for a crop top/tank blouse/goldfish net her 16-year-old daughter had bought. It didn’t fit her, but one member of the family got some use out of it. 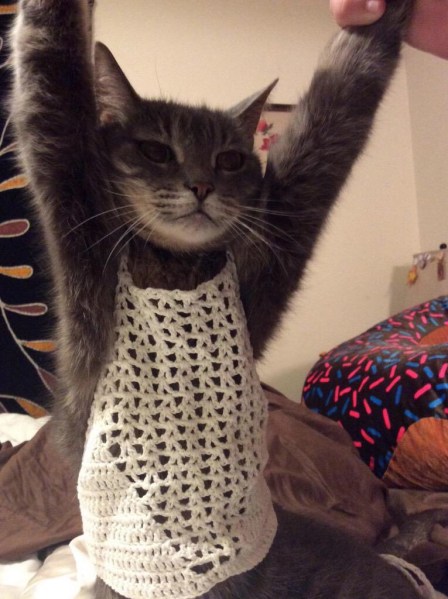 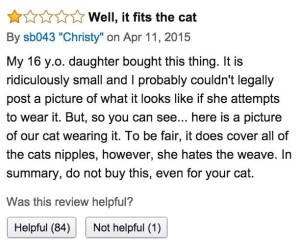 This week, Redditor axeriel found the review and posted it to r/funny, where users quickly upvoted it to the front page. Redditor and self-described crocheter Ifeelveryattacked provides some useful information about the product.

“There isn’t even the same [amount] of rows in the actual shirt in comparison [to] the shirt on the model. What a rip off,” he/she says. “If you used half double crochet it actually covers you quite modestly with little to 0 gaps. . .and they didn’t have to be dishonest about it.”

Well, hopefully the cat got some enjoyment out of it. And if not, at least the rest of us did. 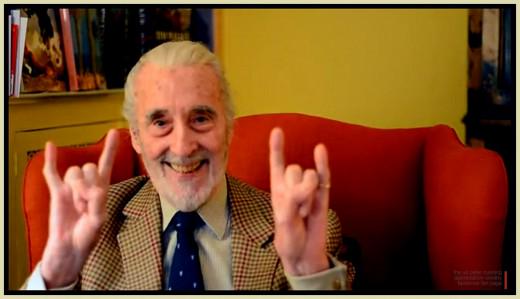