When you’re the daughter of a famous American painter, you’ve likely got some very different thoughts on the man behind the brush than what’s been written in the history books. Jessie Benton, daughter of American regionalist painter and muralist Thomas Hart Benton, has shared some of her personal memories of family life with the Peabody Essex Museum‘s blog, Connected. Her essay is timed to the museum’s exhibition “American Epics: Thomas Hart Benton and Hollywood,” which on view now. The show is be the first major exhibition of the artist’s work in 25 years, and the first to focus on his relationship with Hollywood.

The Missouri-born artist is best known today for his large-scale murals depicting daily life in America, from the urban metropolis to the rural farm. He came to prominence in the New York art world when he was commissioned to paint a ten-panel, room-size mural for the boardroom of the New School for Social Research between 1930 and 1931. America Today was eventually sold by the school and bought and restored by the AXA Equitable Life Insurance Company. Recently, it was gifted to the Met, where it was displayed from September 20, 2014 to April 19, 2015.

Met Museum associate curator of Modern and Contemporary art Randall Griffey dubbed Benton a “cultural anthropologist” in a video for the exhibition, citing the unique attention to the details of social life that appear in his work. Benton’s knowledge of Americana led to working in Hollywood, producing promotional posters for films like John Ford’s The Grapes of Wrath, and A Streetcar Named Desire. Benton also produced the illustrations for the original, film-inspiring John Steinbeck novel, Grapes of Wrath, Mark Twain’s Huckleberry Finn, and many other titles. The artist settled in Kansas City, Missouri in 1935 where he taught at the Kansas City Art Institute.

In “Father Figure,” Ms. Benton ruminates on her father’s Hollywood acquaintances, his often-contentious reputation with the public, and his dedicated studio habits. Below, some highlights:

Her perspective on his controversial public persona:

I knew from a very early age to distinguish between the public and the private persona. And there was a big difference. Publicly, he was an ornery, hard drinking Missouri boy who swore a lot and painted angry controversial paintings, and didn’t give a hoot for culture. This is not who he actually was. I knew that a great deal of the flamboyant, rascally personality was crafted by him on purpose, and all of what he called his “Big Talk” made for great copy in the press.

A rare and intimate glimpse of what it was like posing for him in the studio:

We never spoke. It was a living silence. Except for his whistling without sound, just breaths of air coming from his lips making a song without a tune. His eyes would click into different focus, like a hawk’s eye, deliberate and fierce. I would never dare to interrupt, either the silence or the intimacy.

Each year he painted a work for her birthday:

Every year he would give me a birthday painting. The first one is of me, one-year-old, surrounded by my kitty, wild roses and in the background our beloved Martha’s Vineyard, the sound and Elizabeth Islands. I was born in July, and all the paintings from then on were painted there. Generally, how many objects in the painting coincides with how many years I am…When I was eight, I asked for eight animals coming to my birthday party. I had visions of Walt Disney-like animals, like Bambi, and Thumper and little cute birds. When I saw the painting, I almost cried. The animals seemed frantic and rushing and unhappy, and there was even a mule. I never would have invited a mule to my birthday. 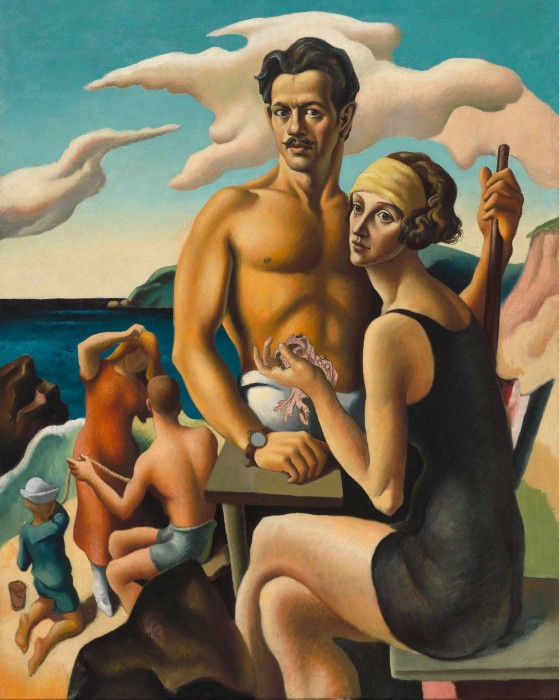