OLD BRIDGE — Hard feelings and old political rivalries erupted between Republicans here this year, making this key Middlesex County town the setting of one of the fiercest, if relatively unrecognized, off-year election primaries in the state.

It was supposed to be smooth sailing, the incumbent council people — Debbie Walker, Brian Cahill, and Jim Anderson –returning to the ballot together after helping to elect a new mayor in 2013. But an uncontested reelection was turned into a four-way race over three seats when the town’s party chairwoman, Anita Greenberg, decided to step down from her post to run for a council seat herself.

A controversial committee screening — which saw the county’s chairman, state Senator Sam Thomspon (R-12), breaking with normal protocol to tinker with the county ticket — complicated matters. Walker, the highest vote-getter at the meeting, was booted from the line and replaced with Cahill, the lowest. Greenberg managed to land a spot, but claimed she was offended by the injustice done to the only other female on the ticket.

Now it’s Greenberg and Walker vs. Cahill and Anderson. But Thomspon’s move generated a significant level of backlash among the county’s rank-and-file, and some still blame him for the entire mess.

“Quite frankly, the whole campaign they have conducted has been against me,” Thompson told PolitickerNJ, referring to Greenberg and Walker. “They haven’t given one reason no to re-elect Anderson and Cahill. They have not given one reason to elect them. It’s a great campaign they ran. And quite frankly, they’re right. I won’t get a single vote today. Because I’m not on the ballot.”

“They’ve done their best to divert the voters from the issues of the campaign,” he said.

Indeed, Greenberg and Walker have made exposing Thompson’s decision at that county screening one of their main lines of attack against the opposition. They’ve charged the octogenarian with gender-bias, and called his intervention in the town’s primary race “foolish” and “disturbing.” Why have a committee screening, they ask, if a county chairman is going to come in later and override it anyway?

Cahill and Anderson, however, tell a different story. They point to conflicts between themselves and Greenberg when she was party chairwoman that they say fueled her “vendetta” against them. Specifically, there was Cahill’s refusal  in 2013 to allow the appointment of a local Democrat to the town’s Municipal Utilities Authority, which Greenberg had pushed for.

The OBMUA has been a major flash-point in the race, with town mayor Owen Henry calling for a state investigation into allegations of cronyism and nepotism at the and sewage agency earlier this week.

“I would expand it beyond that. It came down to, after the council folks did a heck of a job electing the mayor, she thought they should do what she told them to do, and they didn’t and she got frustrated and decided to run for council,” Thompson said. “That’s what it comes down to. Not just the MUA. There were numerous issues over the past couple years.”

PolitickerNJ asked Thompson if he still believes he made the right decision — switching Walker with Cahill, and allowing Greenberg the party line. After all, it does seem to have fractured the party, which will face a Democratic mayoral and council challenge come November. Will whoever wins today — whether it be the county’s ticket or a split between Walker and two opposing candidates — be able to come together in time for that election?

“I have been trying for the last three or four years to get these individuals to get along. They didn’t get along before, I don’t know if they’ll get along after,” Thompson said. “This problem is not something new. But how well they’ll work together after, we’ll have to see. If they’ve got any sense they’ll sit down and they will work together.”

Thompson noted that it’s an off-year election, not to mention a primary, which means low turnout at the polls. The last time the Assembly was alone on the top of the ticket, statewide turnout was 6 percent, he said.

“We’ll get more than that in Old Bridge this year, my guess is 800 or 900 Republican voters. But it will be an effort,” he said.

Then, as if to suggest he’s remained unfazed by it all: “Somebody called me this morning and wanted to know where I was on the ballot. They wanted to vote for me. Ha ha.” 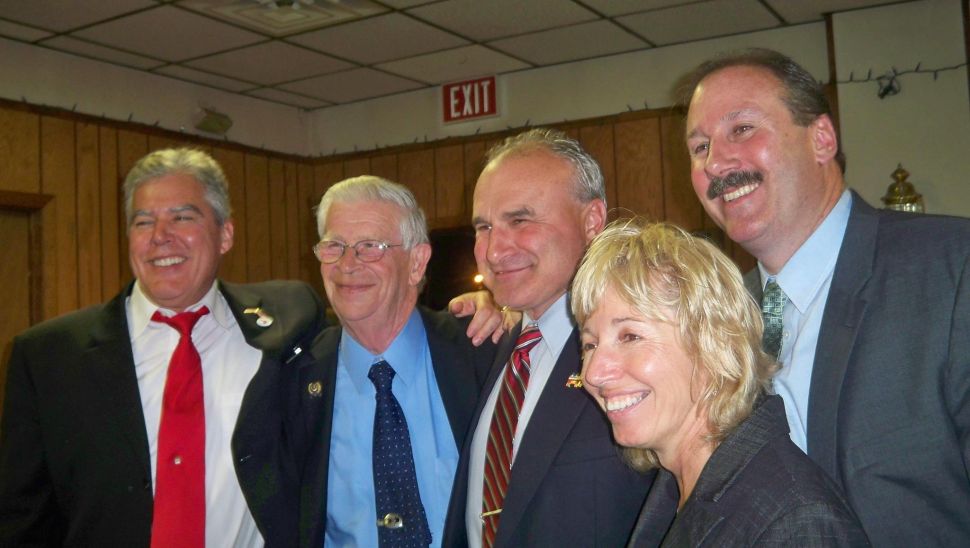